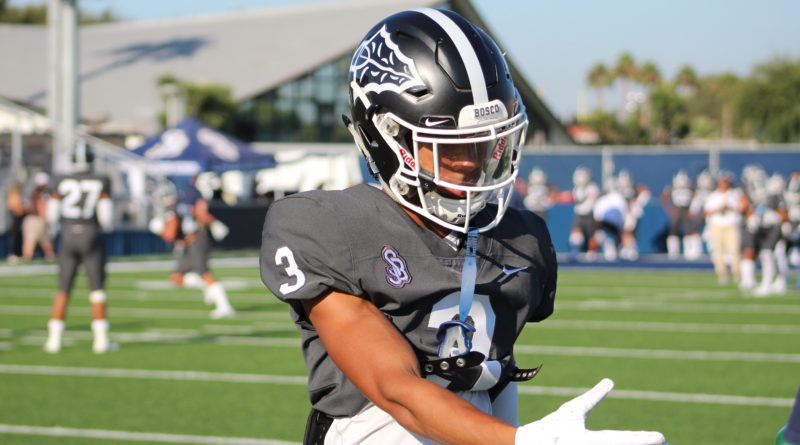 The early signing period for Class of 2021 high school football players begins on Wednesday, and there are multiple California stars who have not yet committed to a Power-5 college.

Here’s a look at the top uncommitted seniors across the state of California who hold Power-5 college football offers. The list is in alphabetical order.

Did we miss anyone? Please email bodie@scorebooklive.com and we’ll update the list.

Alefosio has offers from Colorado and New Mexico.

Cal, UCLA, Oregon, Florida, Florida State, and Texas A&M are among Cardwell’s top schools. He plans to announce his decision on January 25th.

Flowe has over 20 offers from schools across the country. His brother Justin is a freshman at Oregon.

Arizona State and Fresno State are among his offers.

Foreman is ranked as the nation’s top recruit in the 2021 class. His finalists include Georgia, Clemson, LSU, Arizona State and USC. He plans to sign on December 16th but won’t publicly announce his decision until January 2nd.

Harvey decommitted from Arizona earlier this month. He’s picked up offers from six Pac-12 schools during his recruitment.

Kirkwood decommitted from UCLA earlier this month. He’s expected to land at USC.

McDuffie holds offers from Oregon, Arizona State, and Colorado among others.

Moore has an offer from Duke and is receiving interest from Washington.

Narborne’s most recent offer came from Oklahoma State to go along with previous offers from TCU and Tennessee.

Simmons has over 25 offers from schools around the country and was previously committed to Oregon, but is also considering his hometown program, San Diego State.

Smith transferred from Los Osos to Damien for his senior season. He has offers from Cal, Boston College, and NC Central.

Vaka was previously committed to Texas A&M. He plans to announce his commitment on January 6th.

Wright will announce his decision on January 2nd during the All-American Bowl festivities.