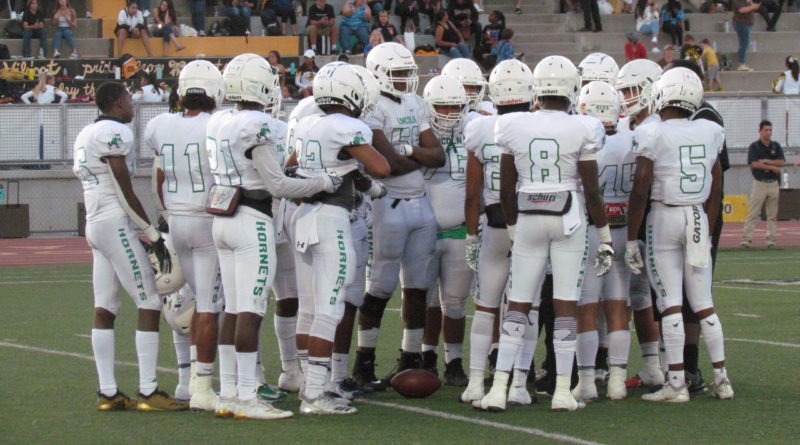 SBLive California is previewing the Top 50 high school football teams in the state ahead of the 2020-2021 season. Even with the season on hold, we will continue to highlight the best teams, players and coaches in California. Here’s an inside look at the Lincoln Hornets of the CIF San Diego Section, the No. 30 team in our countdown.

Asst. Head Coach Jason Carter: “Jalil can change the game on offense and defense. He is the fastest kid in the county, and he shows it every time he goes out on the field. He has great vision and can hit the home run, but he does all the other stuff underneath and he’ll line up anywhere on the field.”

Coach Carter: “I think he’ll probably lead us in receptions because of the position he plays. He’ll fill that role that Benjo O’Brien had last year.”

Coach Carter: “Cayden Dawson is a guy that you all need to watch out for. He’ll be one of the top recruits to come out of San Diego in 2023. He can run like the wind and runs great routes. High football IQ and really understands the game.”

Coach Carter: “Wes brings a lot of electricity to the room and can hit the home run at any time, especially running behind those big offensive linemen.”

Coach Carter: “Extremely smart, a football junky. I look for him to do the same thing that (Tyler) Buchner did at Bishop’s. Anything we want to do we can do it with him. Just loves the game and is an extremely hard worker. The future is extremely, extremely bright for him.”

Coach Carter: “He’s going to be a great safety for us, improved as the season went on last year and has great hands.”

Coach Carter: “He brings a lot of experience; he’s been coached up really well (at his previous schools) and is very mature for his age.”

Coach Carter: “I think he’s gonna have a monster year on defense. He came in and really played lights out for us last year.”

HOW COVID-19 HAS IMPACTED LINCOLN FOOTBALL

COVID-19 has affected every high school football team differently. Coach Carter shares how COVID-19 has impacted Lincoln football over the past few months:

“It definitely impacted our kids, being in the inner-city. Temptation tends to set in a lot when you don’t get to see your kids as much when they’re not doing constructive and extra-curricular activities. That energy is very contagious and can grab you. That’s hard because that’s time your kids wouldn’t be doing that, they could be in the weight room, with their teammates, going from football to basketball or they’re in class and you know where they are. It’s tough when you don’t have that constant environment.”

“For the most part our kids have been getting to where they need to be at. We make sure we check in on our boys, picking them up and taking them to workouts.”

“We’re just waiting and needing them to give us an answer (on a possible season) so we can point our kids in the right direction.”

The Hornets are coming off of back-to-back double-digit winning seasons for the first time since 1979-80. The Hornets captured the Division 2 Championship in 2018 and fell to Oceanside in the 2019 Division 1 Championship.

Lincoln appears to have all the pieces of a team that is capable of making a run for San Diego’s Open Division Championship.

The Hornets loaded up on their non-league schedule this year, and that could have them prepared come the second half of the season and playoff time.

“When we picked the schedule, we wanted to see our guys play against the best,” coach Carter said.

Despite several key losses due to graduation, an infusion of talent should keep the Hornets among the top few teams in San Diego. Even with difficult games throughout the year, it would be a surprise to see Lincoln not among the top competitors for a championship in 2021.

“This is probably the biggest we’ve been since I’ve been here, we average six-four and a half across the offensive line. You feel really good when you know you’ve got the beef up front. Then you look at those wide receivers and they can hit a home run with a three-yard pass or a five-yard out.”

“You’ll never hear us talk about winning games. I talk to them about ‘can you do your job at the highest level? Can you give me maximum effort at the highest level that you can do your job?’ And if the answer is yes, we’re already really athletic, then the next thing is ‘can you be disciplined on every play and do what you’re supposed to do?’ If the answer is yes, then we’re going to be really good. The next thing is ‘are you going to play with a lot of energy and have fun and be excited for your brothers? The play might not be about you at that moment.’ These are the things we talk to them about.”

“We’ve got players at every position that can make plays and really open it up and change the game. We’ve had really good classes before, but I feel like this is my first time having a bunch of athletes that can change the game as much as this group and that’s no disrespect to any other groups.”