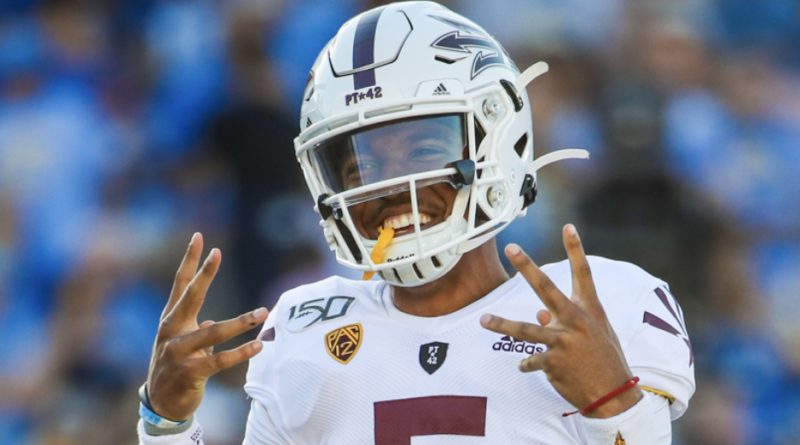 From John Elway to Aaron Rogers, California has produced its fair share of high profile high school quarterbacks who have gone on to have great college and pro careers. In 2020, over 20 FBS starters come from the Golden State.

SBLive’s Connor Morrissette breaks down the list below. It is in alphabetical order.

Bachmeier has battled injury issues in his sophomore season, but he’s been solid in his three starts throwing for for 748 yards and five touchdowns.

Book, a grad student, has had a Heisman-caliber season so far for the AP No. 2 ranked Irish. He’s thrown for 2,097 yards and 12 TDs. He’s also rushed for six touchdowns and thrown just a single interception.

Matt Corral and Ole Miss head coach Lane Kiffin have been a match made in heaven. The redshirt sophomore has thrown for 2,744 yards and 24 touchdowns in 2020.

Costello put college football on notice in his Mississippi State debut against LSU when he threw for 623 yards and five TDs, but since then he’s struggled and battled injuries.

Daniels won the starting job in his true freshman season at Kansas. While the Jayhawks are winless and Daniels has struggled, he’s gaining valuable experience under head coach Les Miles. Daniels was sacked nine times in a 62-9 defeat to Oklahoma on Nov. 7.

After starting as a true freshman a year ago, Daniels was under center in ASU’s lone game so far in 2020, a late 28-27 defeat to USC on Nov. 7. In that game, Daniels threw for 134 yards and a touchdown and rushed for 124 yards. The Sun Devils have only played one game due to having a COVID-19 outbreak within their program. They play UCLA this weekend.

Daniels has started the last two games for Georgia throwing for 540 yards and six TDs. The Bulldogs have won both games. Daniels transferred from USC in the offseason. At Mater Dei, Daniels won a state title in 2017.

Cal is still looking for its first win of the year. In the Bears’ first three games, Garbers has thrown for 588 yards and five touchdowns.

Despite picking up an injury, Gebbia led Oregon State to a shocking upset win over Oregon last week throwing for 263 yards and a TD. He also ran for a score. Paloma Valley grad Chance Nolan will get the start for OSU this week against Utah.

Gilliam, a senior, has thrown for 599 yards and four TDs for the winless Rebels in 2020.

After sitting out last season following a transfer from Washington, Haener has started all four games for Fresno State in 2020 throwing for 1,186 yards and nine touchdowns.

Martinez has split time with Luke McCaffrey at QB for the Cornhuskers in 2020. He’s thrown for 447 yards and a score while rushing for two touchdowns.

It’s been a tough season so far for McDonald and Bowling Green. The Falcons are 0-4 and McDonald has thrown six picks to just one touchdown.

Mitchell split time with other Temple QB’s in 2020. The Owls finished the season 1-6 with Mitchell throwing one touchdown and two interceptions.

Nash is technically the backup for San Jose State, but he plays a Taysom Hill-esque role for the Spartans. He’s thrown for two scores and rushed for a third in 2020.

O’Brien, a Nebraksa transfer, has thrown for 477 yards and three touchdowns for 1-2 Colorado State.

Strong started as a redshirt freshman last season for the Wolfpack. In his second year under center, he’s led Nevada to a 5-1 record while throwing for 1,973 yards and 16 touchdowns.

White transferred from Arizona State. He’s led Memphis to a 6-2 start to the year. In those eight games, White has thrown for 2,602 yards and 24 touchdowns.

Sophomore Carson Baker (Helix) began the year under center for the Aztecs, but junior Lucas Johnson (Mt. Carmel) overtook Baker atop the depth chart following an impressive performance in a defeat to Nevada on Nov. 21. Johnson didn’t play against Colorado on Nov. 28 due to injury and Baker started but was eventually replaced by junior Jordan Brookshire (Cardinal Newman).

If/when New Mexico State takes the field this spring, both Johnson (junior) and Eget (red-shirt freshman) will have an opportunity to start following the transfer of Josh Adkins to University of Texas San Antonio.

Old Dominion pushed its season back to the spring. Smartt started seven games at quarterback last season. He completed 101 of 177 passes for 1,006 yards, one touchdown and six interceptions.