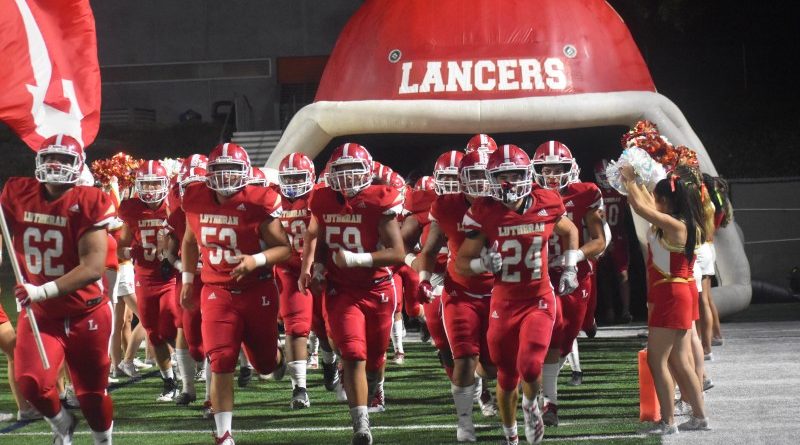 SBLive California is previewing the Top 50 high school football teams in the state ahead of the 2020-2021 season. Even with the season on hold, we will continue to highlight the best teams, players and coaches in California. Here’s an inside look at the Orange Lutheran Lancers of the CIF Southern Section, the No. 36 team in our countdown.

A high 3-star recruit, White picked Boise State out of at least nine offers, primarily Power-5 schools. He’s a very physical tackle and also one of OLu’s most experienced players.

The 3-star recruit stands 6-5, 335, and is committed to Rice. Coach Presley called him a “key to the run game.” Pepe can play tackle as well, but will be featured at guard.

A 3-star transfer from La Habra, Phillips has multiple offers and can play any spot in the secondary. Last season he led the Highlanders with eight passes defensed to go with two interceptions.

Chase made 49 tackles in only eight games of action last season, and picked Kenyon College out of at least a dozen schools to offer him. With OLu’s abundance of standout DBs, don’t be surprised to see him playing a good amount of nickel.

Blackmon made Second Team All-League as a sophomore last season, catching for 385 yards on a team-high 32 receptions. Coach Presley describes him as “shifty and explosive.”

Splitting snaps with Carson Conklin, Gonzalez completed nearly 56% of his pass attempts last season for 954 passing yards and seven touchdowns. The pro-style QB has been offered at the D-1 level, and had a 246-yard effort on 14-of-17 completion against Vista Murrieta last season.

Conklin threw for 654 yards on under 100 attempts last season, and ran for 130 more yards. He currently holds offers from Kansas and Arizona State.

On the quarterback situation, Coach Presley said: “Both have unique strengths [and] are super impact players. Clear communication on where they stand has been our goal. Carson started the last 3 games of the season and will take that momentum into our off-season work outs. It has been tough evaluating both during COVID style of practices.”

In limited action at DB, Jackson came on strong late last season with four interceptions and three forced fumbles. However, he’s likely to be used primarily on offense this season as a pass-catching running back. Presley described him as a “great physical presence” and “explosive” RB who can also play receiver.

Punters rarely make it onto “players to watch” lists, but Logan is ranked as a top-10 punter in the country per 247Sports’ Composite Rating. The reigning Trinity League Most Valuable Punter is committed to Colorado and averaged nearly 38 yards per punt last season.

Gallegos was third on the Lancers with 293 receiving yards and 26 receptions last season. Presley said he’s “having a tremendous offseason on both sides of the ball.”

Lynch got limited run as a sophomore, totaling 66 receiving yards, but Coach Presley has high hopes for him as a junior.

A transfer from Fairmont Prep, Terry was among the leading rushers in California as a sophomore with 2,186 rushing yards and 28 rushing touchdowns in only 10 games.

Hernandez made 62 tackles in only nine games of action last season.

“Like many, just having the daily comradery as a group, trying to balance different weekly learning environments. No one has opted out due to covid-19. We make a commitment every day to focus on the now and not speculate into the future. I think our coaches and our players have been flexible and patient, but you can feel the pressure on the players and staff’s shoulders … will we play? … We continue to focus on the positive of what today brings and support one another when we have to pivot.” – Coach Presley.

Additionally, OLu is one of many California football powers to lose a star player to early graduation. Three-star Arizona State commit RJ Regan has long been one of the top lockdown cornerbacks in SoCal, but unfortunately will miss his senior campaign as an early enrollee at ASU.

After coming literally inches away from a Division 2 quarterfinals appearance last season, Orange Lutheran has plenty of reasons to come into the year with high expectations. With D-1 talent spread across the field, it has a real chance to contend for a title in one of the higher divisions.

Last season the Lancers played one of the toughest schedules in the country featuring only underclassmen in their passing game. The still-young but talented unit of QBs Gonzalez and Conklin and WRs Blackmon and Gallegos is likely to make a significant leap this season. And the O-line is sure to be among the better – if not one of the best – in California.

If Orange Lutheran can fill in a few key holes, the Lancers are a major threat to improve on last season’s campaign and go on a deep playoff run at the Division 2 level. Even being a Division 1 playoff team could be within reach.

Don’t expect anything less from the Lancers than a Division 2 playoff berth, and a clear chance to go on a deep playoff run if healthy.

On offense, replacing the strong, consistent TB/FB tandem of Cooper Vander Hill and Jonah Laban is a brutally difficult ask for any team. But OLu has the potential to do it while also getting a projected leap from the aerial game. Some of the losses on defense will really hurt, but the Lancers are so deep with potential replacements. They have both a high baseline of play and numerous breakout candidates on both ends of the field.

Overall, it’s very realistic for Orange Lutheran to make a jump and go on to register some big-time playoff wins to show for it. There just won’t be much room for error in such a loaded field.

“Cooper and Jonah were a dynamic duo. Desmin Jackson, Joey Feghali, and Jason Terry bring speed, strength, and a natural knack for the hole. They will be rushing behind one of the biggest offensive lines Olu has had. We return four starters up front which will be the difference maker in the trenches. Jason White (6-4, 295), Tristen Webb (6-5, 315), Izayah Manu (6-0, 295) and Faaeanuu Pepe (6-5, 335) all started for us during the 2020 season. With Zach Miller at 6-6 and (transfer) Inoke Samite at 6-0, 335, [the O-line] will give us the physicality up front to run the ball and protect our QBs.”

On the Lancers’ goals and expectations for the season, Presley kept it simple but clear: “Play with confidence, play together, and compete to win on every snap.”