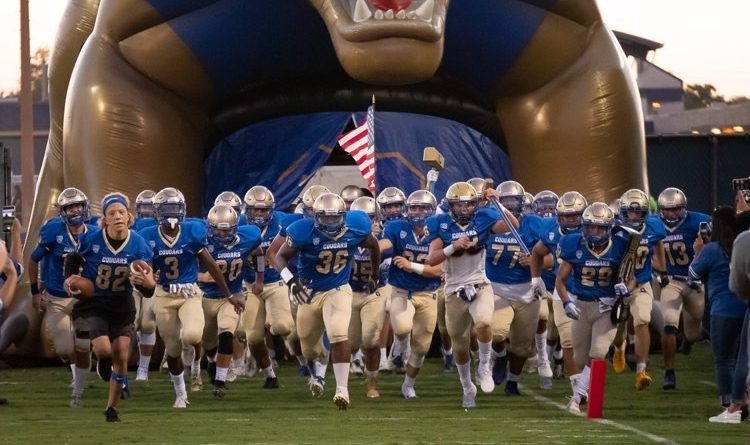 SBLive California is previewing the Top 50 high school football teams in the state ahead of the 2020-2021 season, which is scheduled to kick off the first week of January. Here’s an inside look at the Clovis Cougars of the CIF Central Section, the No. 39 team in our countdown.

Coach Hammond: “We are super excited to have him coming back as a senior, probably our marquee senior. He was great for us last year at 240 pounds at most, and now he’s up to 255.”

Merrihew finished the season with 33 tackles and three sacks, but his impact on opposing offenses around the line of scrimmage was much greater than his numbers would indicate. Merrihew was a First Team All-TRAC and All-Clovis selection, and has college offers including University of San Diego.

A quarterback by trade, Johnson caught for 577 yards and six touchdowns last season at WR with senior Isaiah Robles at quarterback. He also threw for three touchdowns and 138 yards to zero interceptions on 15 attempts last season as the Cougars’ QB2. His strong showing earlier this year at the Elite 11 is another reason coach Hammond has strong confidence in his game.

Coach Hammond: “He’s a legitimate 4.4 guy with a huge arm. Throws the ball very, very well. He worked out with Greg Kanelly, who worked with Josh Allen, who’s his cousin. [Nate has] really worked hard at his craft. He’s super athletic. If he played another position, he’d have 30-40 offers, but it’s hard with quarterbacks when they can’t see you live.

“He’ll be our starter. We’ll give him the ball and let him run with it. He’s going to take off; he has as much talent as anyone. I’ve coached two all-state QBs and he’s the most talented by far. He really matured a lot playing wideout last year – my expectation is he leads us to a championship in the next couple seasons.”

Coach Hammond: “He doesn’t quite have an offer yet, but I’d be shocked if he doesn’t have a handful or even a dozen of offers by the end of the season. Catches the ball well, very shifty runner. Not elite speed, but plus-speed – he’s fast enough to take it to the house when he gets out into the open field. He’s a hurdler in track, and just a tough, hard-nosed kid.”

Risley rushed for 1,338 yards and 15 touchdowns last season as a sophomore, and also had six receptions for two more touchdowns and nearly 100 yards. He made the all-section team as the runner-up for underclassman of the year, and was one of two RBs named to the All-Clovis Team.

Coach Hammond: “Donavan is vastly improved; he’s been up since he was a sophomore. Came to us Christmas of his freshman year from Hawaii. I’ve seen him improve over two years in both academics and on the field. Amazing kid, always positive and upbeat.

“Very physical run-blocker, about 6-1, 300. Improving his pass-blocking. We are excited to see him as a senior and look to him as a leader.”

Coach Hammond: “We found a home for him at outside linebacker late in the season. A 6-2, 220-pound guy who’s a really good athlete, fast and physical. I’m expecting a breakout season for him at OLB/DE.”

Coach Hammond: “Really high-end track athlete free safety with top-end speed. I could see him being a scholarship guy.”

Coach Hammond: “Someone who could be a college guy if he wanted. I think he’ll be a huge weapon for us at tight end, and maybe a little bit on defense.”

Coach Hammond also named Michael Greco, Christian Garcia, and Isaac Garcia as potential breakout candidates at DB and/or WR who could put the squad over the top.

What is likely the biggest impact of the pandemic on the Cougars is the loss of 4-star DE Keanu Williams to early graduation. One of the premier players in the Central Section, Clovis long supported the Oregon commit in his plans to graduate early and enroll at Oregon. Due to COVID-19, Clovis is one of many programs across the state losing arguably its best player.

“The biggest thing in our situation is focusing on what we can control, not getting caught up on the things out of our control,” said coach Hammond.

“We’ve been fortunate being in Fresno County. In June the district was talking to the county health officials about planning the return safely and productively. That’s helped us compared to some other areas. We were able to work into the weight room when we were red and do skill development, like QBs and a group of receivers running routes and throwing balls as long as they were six feet apart. The county guidelines allowed us to do skill development, including with a ball.

“We didn’t get to have kids in the weight room as long as we wanted to … But the majority of my kids are really in shape.”

Clovis is a full-blown Central Section championship contender this season. The Cougars don’t have any projected weaknesses with significant talent across all three phases of the game, and will likely be one of the program’s very best squads in years.

Hammond made no bones about it: “This is definitely my most talented team in my time at Clovis.”

With so many teams potentially in the running for a section title this year – Central Fresno, Clovis, Buchanan, Liberty (Bakersfield), Bullard, and maybe others – every team faces steep odds to be the team that makes it out.

But expect Clovis to look like a true championship threat by the time the heart of the season rolls around. With substantial balance combined with what may prove to be Central California’s best QB/RB duo in Johnson and Risley, the chances are good that the Cougars will be the last team standing.

And whether or not 2020-21 is Clovis’ year to make it out of the CIFCS, this team will also be building towards a 2021-22 campaign in which it could be downright scary.

“TRAC (Tri-River Athletic Conference) has always been very, very good … Clovis Unified is so committed to sports, as much as anywhere in California. 5th and 6th graders play football in school, and know where they’ll play for junior high and what high school that feeds into. The district sets them up for success. Every week is competitive.

“The experience is great for the kids … you can be a high schooler and have 5-10 thousand people at your game, with season ticket holders, in the stadiums we play in, and the community is behind you and into it – the experience is second to none. It’s hard to argue there’s a better place to play. It’s a unique, memorable experience, where you get kind of a Texas feel.

“We’re a little bit on the younger side in terms of our best players, so [if there’s a reduced schedule] that possibility could hurt them. Our goal is still to win a championship, hopefully a regional bowl game.”