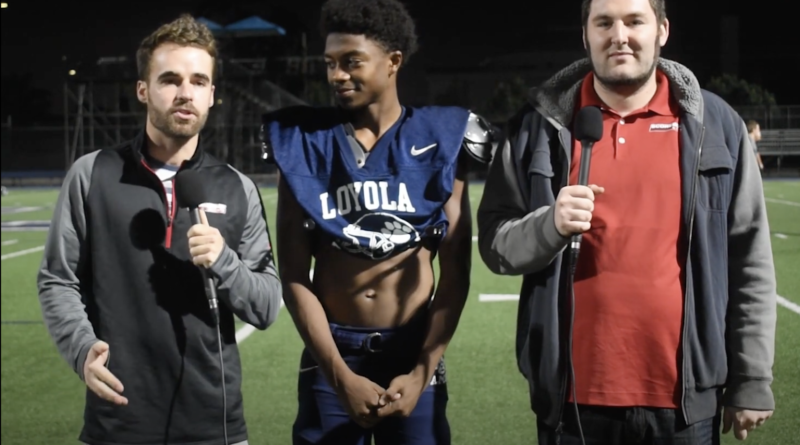 SBLive California is previewing the Top 50 high school football teams in the state ahead of the 2020-2021 season, which is scheduled to kick off the first week of January. Here’s an inside look at the Loyola Cubs of the CIF Southern Section, the No. 41 team in our countdown.

ALL-SOUTHERN SECTION DEPARTURES (all to graduation)

Coach Casani: “Ceyair is ranked as a top 100 national athlete. He’s a lock down corner with elite speed (10.8 100 m). He has 34 FBS scholarship offers, including offers from Notre Dame, USC, Stanford, Michigan, and Oklahoma. He was selected to participate in the All-American Bowl. He has a 3.7 GPA. He’s also an accomplished actor.”

Coach Casani: “Josh will end his career as one of the best defensive linemen in Loyola history. He’s a true under-the-radar gem who is fast, athletic, and a great pass rusher. He has multiple FBS scholarship offers. The pandemic kept him from gaining more notice in the spring and summer.”

Coach Casani: “Zakhari is an outstanding defensive back who can play multiple positions. He was highly recruited with many FBS scholarship offers before committing to Washington. He’ll team up with Wright to form one of the best secondary duos in the state.”

Coach Casani: “Tahj was the first field player (running back) in Loyola history to earn All-CIF honors as a sophomore. He’s a hard-nosed, fast, very talented running back (6.2 yards per carry). He also has elite cover skills as a DB. He will be a key component of an offense that should be explosive. He’ll be playing on Saturday’s. Tahj has a 3.8 GPA. He’s a great kick returner too.”

Coach Casani: “Jacoby began receiving scholarship offers in his freshman year. He led the team in receptions last year. He may help at safety this year. He has a 3.9 GPA.”

Coach Casani: “Sam started at left tackle last fall as a sophomore. He’s a very focused and disciplined athlete. He carries a 4.5 GPA. Sam has made significant strength gains over the spring and summer. He will end up being a highly recruited lineman.”

Coach Casani: “Peter is another member of the Vanis family who has starred on the gridiron at Loyola. He was last year’s second leading receiver before a broken hand sidelined him late in the year. He has phenomenal hands and he’s a great route runner who is tough as nails.”

Coach Casani: “Brayden is a Princeton commit who received many FBS scholarship offers. He has a strong arm and quick release.”

Coach Casani: “Harrison started at running back for the Cubs’ CIF runner-up team last season as a sophomore. He averaged five yards per carry last year. He will be a Saturday player.”

Coach Casani: “Jeffrey is a really quick and athletic lineman who is an excellent pass rusher. He’s capable of making big plays on every down. He possesses rare speed for a down lineman.”

Coach Casani: “Patrick was on the varsity roster as a sophomore and was the leading tackler on the JV squad. He is strong, quick and tough in the mold of the great linebackers who have played for the Cubs. He is a weight room warrior who should be an impact player.”

Coach Casani: “Jackson is a gifted athlete with great range at the safety position. He’s also an excellent kicker.”

IMPACT OF COVID-19 ON LOYOLA FOOTBALL

COVID-19 has affected every high school football team differently. Coach Casani shares how COVID-19 has impacted Loyola football over the past few months:

“It’s been challenging. We’ve been forced to modify the stuff we do to stay within the protocols that have been put in place. We started out with pods of 20 guys and we’re still rolling with that. Not much has changed since we started in September. We’ve got to wear masks unless we’re conditioning or doing heavy physical exertion and we can’t go within six feet of each other so that really limits what we can do football wise.

“We get a lot done agility wise and with conditioning and teaching, but we don’t get to do much real football. We’re hoping things change soon. Overall it’s been great for the kids to just be out there together working out.

“We have two guys that opted out because of COVID, but they weren’t starters last year.”

A CIF title. If Loyola gets placed in Division 3 or lower this season, they’ll have a shot at winning a title.

Winning the Angelus League and going on a deep playoff run. This is the best Loyola team in recent memory so it’s a shame the Cubs dropped to the Angelus League and won’t face other teams in the Mission League this year, but make no mistake this Loyola team is still a very good one. Casani won a CIF title as a player and he’s building Loyola back to what they looked like in their glory years.

“With four All-CIF players returning from last season’s CIF Southern Section Division 4 finalist squad, we are poised for an outstanding 2020 campaign. No less than 14 college scholarship caliber players (in all three classes) are in the program, which means we could make some big noise this season.

“Having the starting quarterback, two starting running backs, two starting wide receivers back, along with two top flight returning defensive linemen and great corners on defense, we’ll be in great shape to make another run for a CIF title. Line depth is a concern, so avoiding injuries is imperative. The team strengths are clearly the skill positions, which are loaded.”