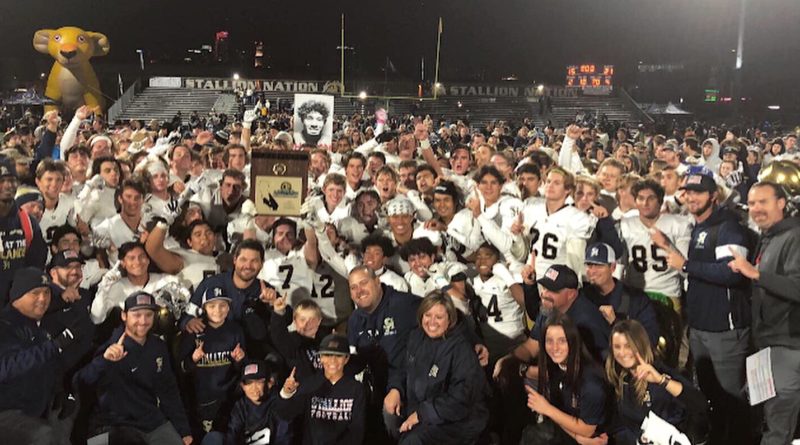 SBLive California is previewing the Top 50 high school football teams in the state ahead of the 2020-2021 season, which is scheduled to kick off the first week of January. Here’s an inside look at the San Juan Hills Stallions of the CIF Southern Section, the No. 42 team in our countdown.

Coach Frith: “Three-year returning starter, he’s won two big (league) championships and a CIF championship as our starting quarterback. It starts with him, being good with the football and leading our offense. He’s got to manage the game well, hit the receivers when they’re open and just play catch. He’s got very good leadership qualities.”

Coach Frith:“He’s going to be special. He can really go up and get the football. He’s got hands like Odell Beckham. As a sophomore he backed up Joey Hobert (now at Washington State) but now it’s his time. He’s had a tremendous off season, so I see him as a no-brainer.”

Coach Frith: “Started all 16 games for us last year as a sophomore. He’s a big, physical kid, really good in the run game and athletic. I see him too as a guy who could play major college football.”

Coach Frith: “Physical receiver, he’s fast and has good hands. Does real well in our game as well blocking on the perimeter.”

Coach Frith: “He’s the guy this year. Physical, strong runner. He can squat over 400 pounds, he can bench 300 pounds, he’s one guy that’s taken advantage of the opportunity for extended time off and he’s ready to go.”

Coach Frith: “A returning All-CIF lineman. He controls the run game. We usually have him as an interior lineman. He’s country strong, a throwback-type kid. He loves to get it on in the trenches, long arms and big hands. He controls the line of scrimmage very well.”

“Well, the positive is extended time allowed players to get into shape.”

“Usually we’re all face to face in a classroom feeding off each other’s energy, body language and all that. Doing it through the computer is definitely not something that we’re real good at as football coaches. We’re personable people, so that was a little bit challenging.”

“Being away from the kids was challenging because of the connection you have. Being mentors with these kids day in and day out, the relationships that you build … to have that not happening as a normal situation, it was a bummer. But we’ve been with our kids for 12 weeks so that’s all in the past and some of the kids now have rebounded, the ones that were maybe affected negatively, maybe mentally or physically because of the time away from us they didn’t have that structure and discipline, they’re back. There’s no excuses now. I look at it like we still have challenging times ahead of us but there are no excuses, we’re going to go out there and play at some point and you better be ready to rock and roll.”

San Juan Hills has gone a combined 8-0 in league the past two seasons but will face a much different slate in 2021 in the South Coast League. They’ll face Mission Viejo, San Clemente, and Tesoro in their three league games, making it very difficult to emerge unscathed. If they do, then their playoff seeding should set them up for success.

Six of the Stallion’s seven non-league matchups look to be very winnable games, with their battle against Corona del Mar appearing as a big opportunity for a statement win. If San Juan Hills can take care of business in the early portion of the schedule, a 1-2 league record could still have them in position for a postseason run.

“I would say that we’ve got a team where on the offensive side of the football we’re going to be young. We have two or three returning starters and we graduated a strong senior class last year that led us to a league and CIF Championship. We’ve got some kids with experience and this extended time that we’ve had working out, I’ve seen some kids really transform their bodies and I’m very excited about the kids that we have that are going to be filling some big shoes.”

“On the defensive side of the ball we return about half of our guys. The defense was kind of like the heart and soul of our team that last couple of years. We’ve got several guys with playing experience and I expect us to be the same defensively. We’ve been a pretty successful group at creating a lot of turnovers. Our turnover margin is very much in our favor the last couple of years.”

“This extended time in the weight room the kids have really been getting after it. I almost feel like they’ve been given an extra year because our season would be wrapping up most likely in the next week, but who knows when we’re even going to start. I’m sure that’s the case for a lot of teams. Extended time means extended opportunities for these kids to mature, hit the weight room and prepare themselves.”