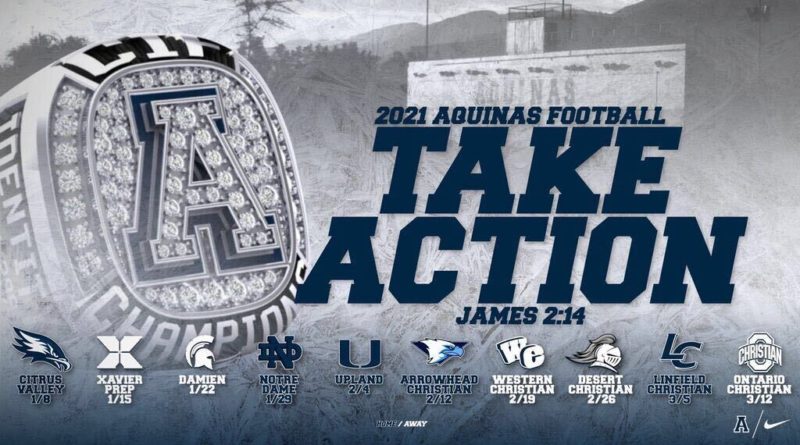 SBLive California is previewing the Top 50 high school football teams in the state ahead of the 2020-2021 season, which is scheduled to kick off the first week of January. Here’s an inside look at the Aquinas Falcons of the CIF Southern Section, the No. 46 team in our countdown.

Ross made first team all-league on defense last season, and was a factor at running back. He ran for 372 yards on over 10 yards per carry, and five touchdowns.

“He didn’t get a lot of reps last season with Terayon (Sweet) doing such a good job, but we believe he’ll be able to fill in for him at running back just fine,” said coach Brusig.

Taase was first team all-league last season as a sophomore.

Cooper went for 256 receiving yards on offense, and is a nationally-ranked CB on the other end. He caught three picks last season and made first team all-league, and has at least one D-1 offer.

Like his brother Anthony, Jalen Cooper is also a nationally-ranked corner with an offer from Idaho. He made second team all-league last season on defense and also caught for 238 yards on offense.

Perez spent some of the season starting at QB last season, passing for 690 yards on 60% completion. He’s also a major factor on defense, finishing with 52 tackles and two interceptions in 2019. He will be in the mix at QB this season.

Robles started at QB for Notre Dame (Riverside) last season, throwing for 2,125 yards and 21 touchdowns on over 60% completion. He’s the favorite to win the starting job this season, but will have to deal with the sit-out period as a transfer.

Austin made second team all-league last season with 62 tackles and an interception.

Hernandez made 33 tackles in eight games last season and has a strong chance to take another step forward this season.

Yet another returner on defense who may be set for a big 2020-21 season, Bruno recorded 29 tackles, a pick, and a sack in eight games last season.

Pate came on strong late last season at DB, and Brusig expects him to be a major factor both at receiver and in the secondary his senior year.

Papatsos will have an opportunity to compete for the starting job in his first year of high school. Whether or not he ends up a factor this season under center, he could be a major part of Aquinas’ future at QB.

A transfer from Narbonne, the 6-3, 265 junior has an opportunity to add yet more size and athleticism to Aquinas’ defensive line.

On this season’s core, Coach Brusig said, “They’re all real Falcon football players. They believe in the values of this program – faith, attitude, sacrifice, tradition – with faith probably being the most important.

“They’re selfless guys, they’re about the team. They buy into what we’re doing. We wouldn’t have the success we do if they don’t buy in and believe in each other.”

IMPACT OF COVID-19 ON AQUINAS FOOTBALL

In addition to the training time its missed throughout the season, the biggest impact of the pandemic on Aquinas football are the losses of brothers Francisco and Francis Mauigoa.

The two returned to American Samoa for the 2020-21 school year as a result of the pandemic, and the uncertainty surrounding high school football in the states this year. Francisco, a senior, was the reigning Ambassador League Offensive Player of the Year and First Team All-Defense selection, and Francis, a sophomore, is the top-ranked offensive tackle in the country in the Class of 2023 in addition to shining on the defensive line.

Brusig said the Falcons are optimistic about Francis returning to Aquinas as an upperclassman. He also mentioned that Francisco received an offer from Washington State during the season in American Samoa, and that as much as the program misses him, they’re very proud of him.

“We’ve been progressing at our own pace. Zoom meetings, we’ve been able to get back to the weight room and doing some conditioning work,” said Brusig. “They were doing it from home until a little after Labor Day when we started getting smaller groups in, and then we were able to get almost everyone here.

“Now when you’re starting to get into November and you’re supposed to be in the playoffs, the biggest thing is being able to be in constant communication with the kids so you can keep the team together, keep everyone upbeat and motivated for when we can get back out there. Keep their minds off the current situation. Our kids have been working hard in the weight room and conditioning.”

Aquinas finished one score away from a CIF 2-AA state championship last season, and returns a significant part of its core. The Southern Section’s move to a new division system substantially alters the team’s outlook – if Aquinas remained in Division 5, or even moved up a division, the Falcons would enter the season as a massive favorite to repeat.

The unexpected losses of the Mauigoa brothers hurts badly, but Aquinas is still likely to bring one of the top defenses in the section, plus plenty of returners from a ground-and-pound offense that was comfortable making plays in low-scoring games. Expect Aquinas to land in a high division for the playoffs and present a substantial threat for a deep playoff run.

A team with as much defensive security as Aquinas has a high baseline even if the best-case scenario doesn’t transpire.

That said, with the Mauigoa’s out, the Falcons won’t have the offensive firepower of other SoCal elites, and they are also major losses in the front seven. In last season’s championship run, they peaked late in the season after a couple preseason losses that didn’t reflect their true potential.

If the offense takes some time to click – especially with Robles missing preseason games as a transfer – the Falcons could end up in Division 3 or 4 as opposed to a finish potentially as high as Division 2. In that case, they’d still be in great shape to compete for another division title, just not in as high a division as they could potentially contend in.

“The number one thing is we want to be able to always play really good defense. That’s always been a part of Aquinas football, playing good defense and running the football successfully.

“A lot of our success has been … being able to win these close games and keep our offense on the field. We’ve always been that way, and being a physical football team where everyone is disciplined and focused on their jobs is a big part of the success we’ve had.

“We have a really tough preseason. We are going to go through those five games, play our league, see what division we’re in for the playoffs, and go from there.”