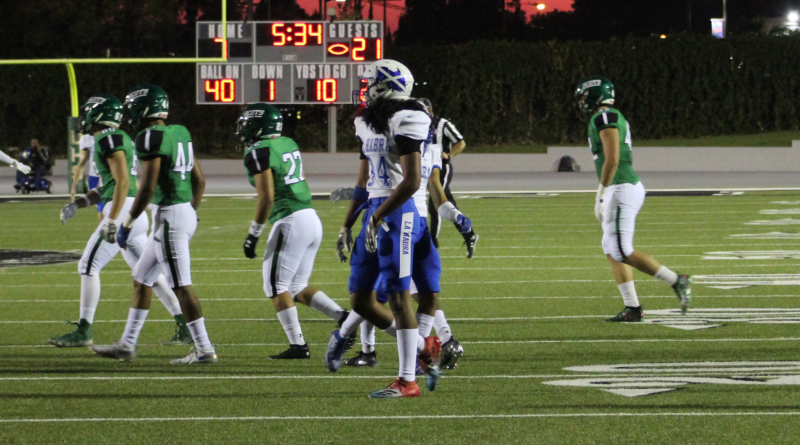 SBLive California is previewing the Top 50 high school football teams in the state ahead of the 2020-2021 season, which is scheduled to kick off the first week of January. Here’s an inside look at the La Habra Highlanders of the CIF Southern Section, the No. 47 team in our countdown.

Coach Mazzotta: “TJ is a Pac-12 commit. He’s a super rangy athlete. A year ago he was the sophomore 110 high hurdle champion in our league and he had never run hurdles before, so that gives you insight into his athleticism and I’m sure he would have probably repeated last year if we had a track season. He’s put on some really good, solid, lean muscle in the offseason. I think last year he might have played at 205 pounds, and he’s probably at 235 right now. He is going to be a force at linebacker, but not just at linebacker in the sense of run fills and pass drops, he’s a great pass rusher too. That’s probably his favorite thing to do. He’s going to be super effective if I’m smart enough to utilize him right. Two years ago, I was putting him at the running back spot in the springtime after watching him hurdle. He’s one of those guys that if I give him the ball, he’s going to make some plays. So don’t be surprised if you see him carrying the ball here and there.”

Coach Mazzotta: “Brandon was one of our top guys last year. He returns and he’s super gifted and super, super quick. He’s a perfect slot receiver due to his size and body type. He’s a pretty good nickel corner too. He’s our No. 1 wideout, but will probably play both ways. He’ll return punts and kicks too.”

Coach Mazzotta: “Max had a great year last year. He was doing a little bit of everything. He played a lot of offense early in the year and then moved more to defense as the year went on. He’s a very effective safety. He has a very similar body type to Brandon. He can do it all for us.”

Coach Mazzotta: “Jackson played the Y position last season and rotated with Mason West (now at Washington). Jackson is fast and athletic. He’s ready to have a breakout senior year.”

Coach Mazzotta: “We think Jacob is going to start in the slot opposite of Brandon. He’s a gifted little guy. It’s hard to believe he’s a sophomore the way he runs his routs.”

Coach Mazzotta: Elijah is a big guard with a couple of offers. He’s improved a tremendous amount.”

Coach Mazzotta: “DJ will be the heart and the brains of our defense this year.”

Ryan Vasquez and Justin Gil, a Villa Park transfer, are locked in a quarterback competition for La Habra.

“These kids are very similar,” Mazzotta said. They’re both sophomores and they’re friends. I may play both of them. I’ve played two quarterbacks before. If they both deserve to play, they’ll play.”

One other name to keep an eye on is junior Troy Kaufman. He also plays baseball and had to sit out last year after having surgery on his arm. Kaufman could play his way into the mix as well.

BOTH LINES WILL BE STRENGTHS

In addition to Sauvao coming back on the o-line, senior center David Sanchez returns for La Habra too.

Left tackle Michael Shubin is back as well. Even though he projects as a guard at the next level, Mazzotta likes him at tackle because of his athleticism.

Defensively, seniors Mason Ellis and Ethan Draper return. Look for Draper to play some offensive line too. One of the defensive players that Mazzotta is most excited about is junior defenive lineman Carter Bessire.

“Bessire is every bit of six-four and 230 pounds. You might be talking about him,” Mazzotta said.

“It’s been tough. It’s been difficult. We were able to come back in June. Our district had opened up summer practice and we were doing awesome. We were throwing the ball, we were doing all those things and lifting weights. We just … we were kicking ass.

“Then it shut down and you should’ve seen the kids. They were so excited and so happy to be back to normal then they shut us down and we didn’t see the kids again in person until August and then it was just conditioning.

“We told the kids, look at it this way, what a blessing to work on and really focus on development and all that stuff, you know? So we looked at it that way. Even though we couldn’t do real football stuff, we could work on our speed techniques. It was great. And then we progressed and did a little bit more. And finally now, our district has allowed us to use a football as of last Thursday. So it’s getting back to normal.

“We’re able to throw some seven on seven and do those things, so we’re getting back to a little normalcy. I told the coaches in the summer, whether or not we play our season it’s out of our control, but just being able to practice together for the kids is really important and really beneficial.

Every good team in the Southern Section this season will have a chance at a Section title if they can get a bit of luck. Not knowing what division you’re in until the end of the season means La Habra could be anywhere from Division 2 to 4 (that’s a rough estimate).

If the Highlanders drop some non-league games and then win the Freeway League, which they’re expected to, then that could put them in a lower division where they may compete for a championship. La Habra lost a generational cornerback in Clark Phillips (Utah) and a three-year starting quarterback in Ryan Zanelli (Penn). Replacing those two will be a challenge, but it may be a blessing in disguise.

Win the Freeway League and then see what happens in the playoffs. If La Habra can get consistent quarterback play, that will elevate them from a solid team to a very good one.

“The goal is always to win a league championship … In years past you would know who is going to most likely be the top dog in your playoff division and we obviously won’t know that this year. We don’t know where we’re going to end up this year. We’re going to play our best and let the chips fall where they may. It will be interesting.”