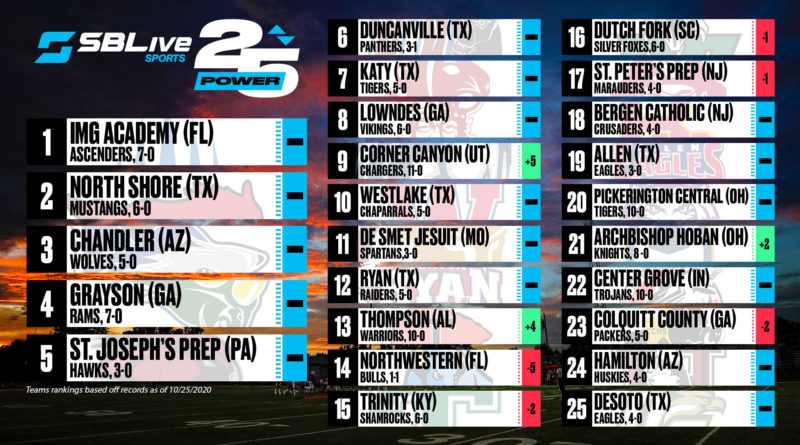 The 2020 high school football season continued across the country this week with 22 SBLive Power 25 teams taking the field. Twenty-one of the squads that were included in last week’s Power 25 won, with the exception of No. 14 Northwestern (Miami, Fla.) who fell to No. 1 IMG Academy (Bradenton, Fla.) 49-14.

The same 25 teams that were included in last week’s Power 25 made this week’s list, but there has been some movement. No. 9 Corner Canyon (Draper, Utah), No. 13 Thompson (Alabaster, Ala.) and No. 21 Archbishop Hoban (Akron, Ohio) all moved up in the rankings.

The SBLive Power 25 rankings are compiled by SBLive reporter Connor Morrissette based on observations and conversations with an extensive network of coaching and media sources across the country.

Ranking rationale: Running back Kaytron Allen scored IMG’s first TD from six yards out on Friday which got the ball rolling on a 28-point first quarter for the Ascenders. Northwestern was supposed to be a stiff test for IMG, but the Ascenders rolled winning 49-14 to cement their spot at the top of the Power 25.

IMG has six players listed in the top 50 of 247Sports.com’s 2021 Florida recruiting rankings and nine listed on the website’s top 50 for 2022. No one in the country playing in 2020 can compete with that type of roster.

North Shore is 36-1 over the last three seasons. The Mustangs have won two 6A Division 1 championships in a row in Texas.

Ranking rationale: In its first real challenge of the season, Chandler led 13-7 at halftime against Centennial, but an 18-point third quarter gave Chandler their fifth blowout win of 2020. Nicolas Nesbitt scored three rushing touchdowns for the Wolves.

Expect Chandler to win comfortably until they meet Power 25 No. 24 Hamilton on Nov. 20.

Ranking rationale: Grayson played its best game of the season on Friday. The Rams defense dominated as it has all year, star senior running back Phil Mafah had 12 carries for 149 yards and two touchdowns and USC QB commit Jake Garcia made his debut and fit right in tossing a TD pass.

The Rams played like a top five team in the country on ESPN2 Friday night. No. 8 Lowndes and the rest of Georgia’s 7A class was put on notice.

Ranking rationale: St. Joseph’s Prep didn’t play its game two weeks ago against Bishop Sycamore due to COVID-19 and could only practice virtually last week, but the Hawks still dominated on Saturday.

Once St. Joseph’s Prep gets a few more games under their belt, they’ll be a contender for a spot in the top three of the Power 25. This team is legit.

We rank Duncanville as the second best team in Texas. They’ll stay in our top ten until they’re beaten by an in-state foe. Their lone loss came to No. 1 IMG Academy on Oct. 10.

Ranking rationale: Lowndes finally took the lead on Friday thanks to a Jacurri Brown rushing TD with 5:37 to play. The Vikings, who went on to win 17-13, were nearly shocked by sub .500 Tift County.

Even though we have Lowndes as our No. 2 team in Georgia, many national and in state polls have the Vikings at No. 1. They’ll need to have a much better performance in order to beat Power 25 No. 23 Colquitt County next week. That game will be one of the few matchups in 2020 that pits two Power 25 teams against each other. We’ll be watching.

Ranking Rationale: In 2020, Jaxson Dart put together one of the best regular seasons from a high school quarterback we’ve ever seen. Through ten games, the senior has completed 68 percent of his passes for 3,345 yards and 48 touchdowns. He’s thrown just two picks.

In the second round of the playoffs last week, Dart completed 22 of 28 passes for 405 yards and five touchdowns.

Corner Canyon is a great team, but they’re led by a senior QB who has had a generational season. The Chargers should win another state championship in a few weeks, which will then cement Dart’s campaign as one of the best ever in the history of Utah high school football and maybe even the country.

Corner Canyon plays Bingham in the quarterfinals on Friday, a team they beat 42-20 on Aug. 28.

Ranking rationale: Another week, another easy win for Westlake. Junior quarterback Cade Klubnik threw for four touchdowns in the victory and ran for one more.

The Chaparrals have put up over 50 points in all five of their wins in 2020. They play Lake Travis (Austin, Texas) on Nov. 27. That game will provide a better understanding of exactly how good Westlake is this season. Expect their other remaining regular season games to be comfortable wins.

Westlake won the 6A Division 2 title in Texas a year ago and should make a deep postseason run again in 2020.

Ranking rationale: De Smet only played two regular season games before entering the playoffs, but in the first round the Spartans dominated. Their game was so lopsided that Howell handed the ball to one of their offensive lineman at the end of regulation.

Ranking rationale: Following Ryan’s impressive 23-20 win over Guyer on Sept. 2, the Raiders have reached the lighter portion of their schedule. In Ryan’s win last week over Centennial, the Raiders scored 55 first half points. Ryan QB Seth Henigan completed 12 of his 14 passes for 288 yards and four touchdowns in the win. The Raiders are a consensus top five team in Texas.

Ranking rationale: Thompson clearly established itself as the top team in Alabama after beating the state’s second best team, Hoover, two weeks ago to win a regional title and finish the regular season undefeated.

In the win, junior quarterback Conner Harrell Harrell completed his first 11 passes and his final 12 throws to finish 28-of-34 for 301 yards and a pair of touchdowns. He did throw two interceptions in the game though.

Hoover and Thompson should meet again in the playoffs in a rematch that will have much more at stake.

Ranking rationale: Northwestern had a tough time with No. 1 IMG Academy, falling 49-14 on Friday. Remember, No. 6 Duncanville (Texas) lost to IMG 41-19 earlier this year, so Northwestern’s heavy defeat should not come as a major surprise. It doesn’t look like any team currently playing high school football this fall could hang with IMG.

The loss drops Northwestern to No. 14, but the Bulls should get back to their winning ways and be a consistent Power 25 team as the abbreviated Florida high school football season continues.

The Bulls won a 5A title last season in Florida.

Ranking rationale: Nathan McElroy passed for 257 yards and threw four touchdown passes to Jack Mitchell in Trinity’s win. The Shamrocks start 11 seniors on defense for a unit that is one of the best in the nation, so it’s not a surprise Trinity held Bowling Green to just a touchdown on Friday.

Trinity won a 6A championship in Kentucky last year and are in a great position to do so again in 2020.

In Friday’s win over South Pointe, Dutch Fork running back Marcus Taylor rushed for two touchdowns. The Silver Foxes have won all of their games in 2020 by at least three scores.

Ranking rationale: St. Peter’s Prep is our No. 1 team in New Jersey. In their win two weeks ago over Paramus Catholic, junior running back Sam Slade rushed for 94 yards and two touchdowns.

St. Peter’s Prep didn’t play this past week due to COVID-19. Their would-be opponent, DePaul, had an outbreak.

Ranking rationale: Bergen Catholic is our No. 2 team in New Jersey. Junior running back Ryan Butler rushed for 247 yards and three TDs in Bergen’s win over DePaul Catholic two weeks ago.

Bergen will play No. 17 St. Peter’s Prep on Nov. 7 in what will be the regular season game of the year in New Jersey.

Bergen Catholic has a great 2022 class headlined by quarterback Steven Angeli and cornerbacks Jaeden Gould and Jayden Bellamy, all of whom are big time prospects.

The Crusaders didn’t play this past week because Don Bosco Prep (Ramsey, N.J.) had a COVID-19 outbreak.

Allen could be a sneaky 6A contender in Texas.

After winning Division 1 in Ohio a year ago and returning a number of key players including senior receiver Lorenzo Styles Jr. (Notre Dame commit), senior running back Nick Mosley (Bowling Green commit) and sophomore defensive back Sonny Styles, Pickerington Central will be the top team in Ohio until someone knocks them off.

Victor Dawson rushed for 187 yards and a TD on 28 carries for Hoban in their dominating win.

Ranking rationale: Undefeated Center Grove rolled in their playoff opener thanks to junior quarterback Tayven Jackson who completed 15 of 16 passes for 264 yards and a touchdown. He also rushed for two scores. Jackson has scholarship offers from Arizona State, Cincinnati and Indiana, among others, per 247Sports.com.

Center Grove is the favorite in Indiana’s 6A playoffs. The Trojans give up only seven points per game on average this season.

Ranking rationale: Following a long layoff due to COVID-19, Colquitt County took the field over the weekend and beat Camden County 34-13. Jamaree Hill rushed for a TD in the win for Colquitt. The Packers led 24-0 in the third quarter.

Colquitt County is our third ranked team in Georgia. They’ll play Power 25 No. 8 Lowndes next week in one of the regular season games of the year in Georgia.

Ranking rationale: DeSoto hasn’t played a close game all season. That could change next week when the Eagles take on Cedar Hill. In DeSoto’s blowout win over Lake Ridge on Friday, senior quarterback Samari Collier completed 26 of 43 passes for 372 yards and five touchdowns.

DeSoto has six players listed in the top 200 of the 2021 247Sports Texas high school football recruiting rankings. Shemar Turner, a defensive end, leads the way at No. 9.

TEAMS ON THE OUTSIDE LOOKING IN