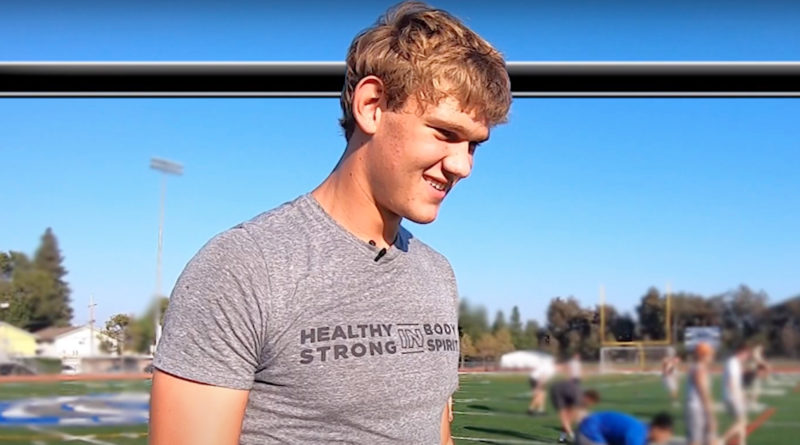 With the 2020-2021 California high school football season on the horizon we’re taking a look at the top players in the state.

Here are the Top 10 juniors (class of 2022) in Northern California.

Roush has excellent ball skills, and is able to adjust while airborne to make a catch. His long wingspan gives him a big catch radius, and he’s dangerous in both the deep ball and short passing game. In a run-heavy offense, he is a great in-line blocker which makes him even more dangerous at the tight end position. Roush has more than 15 offers, including Michigan State, Nebraska and Stanford.

Moss had been hiding under 5-star WR Troy Franklin’s shadow for the longest time, but he is now the main receiver on his team with Franklin deciding to enroll at Oregon this spring. Moss is a well-rounded receiver, combining secure hands, surgical route running, and dangerous speed to create separation and haul in deep balls. His route tree is very large, and he can line up both inside and outside.

Playing for one of the nation’s best programs at De La Salle, Tagaloa has received excellent coaching at the tight end position. Playing on a team known for their run heavy offense, Tagaloa is one of the best pass blocking tight ends in this class. While he does not have top end speed, he has a high catch percentage, and he consistently racks up significant yards after the catch.

Berry is one of the more underrated receivers and corners in California. He’s a defensive stud whose best traits are his ball-hawking ability and awareness of the game. As a receiver, Berry is a threat in the deep game, and in the short passing game he has the ability to make defenders miss. His unique skill-set will make him a great addition at whatever school he chooses to attend.

Playing in a top program with an outstanding head coach and lots of skilled players around him, Mahasan is in an environment to succeed. Mahasin was a key contributor on a Padres team that made it to the 2019 state title game after winning the CCS Open Division title. Mahasin scored eight touchdowns for the Padres last season as a supporting player. “The Missile” is expected to play a much bigger role for Serra this year.

Size and strength give Taliauli the “it” factor that makes college coaches drool. Taliauli received a big offer this past May from Oregon, lighting up his Twitter feed. Saint Francis was down last season, but with Taliauli anchoring the line look for both the team and this top recruit to get lots of attention in 2020-21.

Burnett transferred from Capitol Christian to Elk Grove last season. Also a track star, Burnett can play a variety of positions, although he says his passion is running back. Burnett has offers from Colorado, Nevada, UNLV and San Jose State.

If you’re getting the idea Serra is loaded with athletes this season, you’re right. Lampkin was all over the field last season during the Padres’ playoff run. With good size and great speed, Lampkin will be a huge part of the Padres game plan this season. A dual-threat quarterback, Lampkin has the speed to separate from defenders and the size to mow them down when needed. With the injury to Daylin McLemore last season, Lampkin stepped in and did a fine job as a sophomore leading his team to the state D-1A title game. Lampkin threw for 750 yards with eight TDs and just three interceptions. He also ran for 448 yards and four touchdowns. Now experienced and confident, Lampkin should be a force for the Padres in his junior season.

There was a lot of buzz around Rossi last season as a sophomore starter for Palma. With great arm strength and accuracy, Rossi is labeled a pro-style quarterback. Rossi also played JV basketball for the Chieftains and plays baseball for the Show California travel team. Rossi is ranked 88th in the state as a shortstop among the class of 2022. Invited to this year’s Elite 11 camp, Rossi has not received a college offer yet.

Taufui is the top two-way player in the class of 2022. He’s a strong runner who can make a move or plow through a defender. Taufui is also a hard-hitting strong safety who is a tackling machine. Taufui already has an offer from Arizona State.