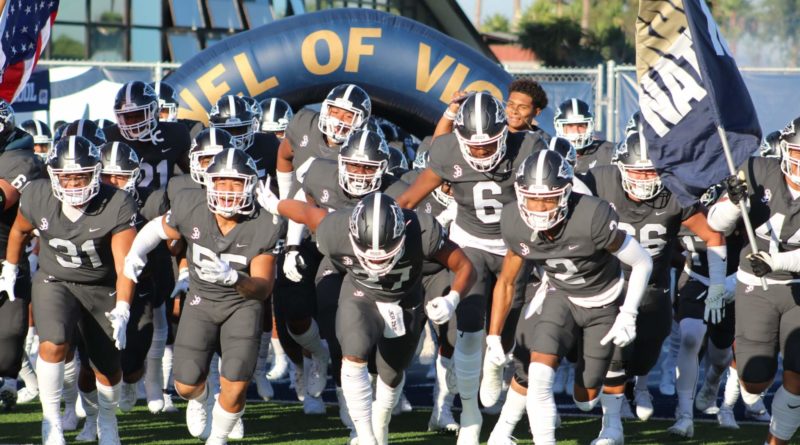 With the hope of a 2020-21 California high school football season on the horizon, we’re taking a way-too-early look at the top teams in the state of California, section by section.

For the CIF Southern Section, football practice is scheduled to start Dec. 14 and games are scheduled to kick off on Jan. 8.

Here’s a look at the best high school football teams in the CIF Southern Section heading into fall 2020.

Despite numerous key losses including quarterback DJ Uiagalelei and wide receiver Kris Hutson, the reigning national champions will return enough of their core to retain the spot in the power rankings. The first question for the Braves in 2020 is who will start under center — junior Katin Houser or sophomore Pierce Clarkson?

The Monarchs also lost a world-class quarterback in Bryce Young as well as several other stars across the field, but like the Braves, the Monarchs still return more nationally-ranked talent than anyone else on both sides of the ball. The three names to know that will fight it out to replace Young under center are Emmett Brown, Tobey Schmidt, and David Clark III. They’re all juniors.

Corona Centennial brings back a ton of talent from last year and it starts with defensive lineman Korey Foreman, a consensus top five player in the 2021 recruiting class. Jake Retzlaff should start at quarterback after splitting time under center a year ago. Jaden Mickey and Calvin Pitcher will lead the Huskies’ secondary. Head coach Matt Logan will have another great team in 2020.

The Friars were just seconds away from an Open Division semifinals appearance a year ago and they also lost to St. John Bosco by just one point in the regular season. Troy Thomas’ team had a great 2019 and is looking to build on that in 2020. With quarterback Noah Fifita and wide receiver Tetairoa McMillan back, they are likely to keep making a push towards the top.

Coming off back-to-back Southern Section division titles and CIF State finals appearances, the Trailblazers will push for a Division 1 playoff spot this year. Head coach Jon Ellinghouse isn’t shy when it comes to talking about his 2020 group. This team could be the most talented team he’s ever had at the school. Quarterback Chayden Peery and defensive back/wide receiver DJ Harvey are the team’s top seniors.

After a couple of strong seasons built around underclassmen, now is the time to contend for a Warriors squad loaded with returners. Quarterback Miller Moss committed to USC on June 1.

Bishop Amat quarterback Tobin O’Dell is back along with nationally ranked defensive back Dyson McCutcheon. Amat is 10-0 in the Mission League in the last two seasons. They’ll be at or near the top of the league once again in 2020.

After a shaky start to 2019 following some roster turnover, Chaminade rounded into form as a Division 2 finalist by the end of the season. Despite losing some important seniors, the Eagles should be good again in 2020 under head coach Ed Croson. Quarterback Jaylen Henderson is back along with last year’s freshman sensation Ian Duarte, a receiver.

After a Division 3 title in 2017, the Mustangs have been in the mix for a Division 2 title for two straight seasons. With one of the better passing games in SoCal and a handful of their top defenders returning, they’ll be in good shape in 2020. AJ Duffy is a top quarterback in the region, regardless of class.

On one hand, the Lancers will be hard-pressed to fill the void left by numerous two-way studs graduating. However, they’ll still be a force up front on both sides of the ball, and they have a nice group of highly experienced upperclassmen coming back starting with 2020 quarterback Mikey Zele.

Two straight very promising seasons have been marred by injuries for the Cavaliers. Will this year be different? Star quarterback Maalik Murphy and head coach Scott Altenberg will hope so.

With USC committed QB Jake Garcia at La Habra for his senior season, the Highlanders will once again be dangerous. Garcia and WR/SB Brandon Vasquez will likely make up one of the top offensive tandems in the Section.

The Knights were another promising team in 2019 that was derailed by injuries. Many seniors and transfers will be missed along with legendary head coach Kevin Rooney who retired, but the Knights do return their starting QB Cooper Meek who missed almost all of last season with an injury.

The Tritons have a lot of offensive holes to fill outside of running back James Bohls, but defensive back Cole Batson and linebacker Cooper Robertson spearhead what should be another great defensive unit.

There will be a quarterback competition at Oaks whenever football practice is allowed to start. The Lions have some strong returners led by linebacker Ethan Calvert and wide receiver Alonzo Fontenette, but how good the 2020 Oaks Christian team will be, will be determined by the team’s quarterback play.

It’s a new era at St. Bernard. The Vikings are ready to make some noise under new head coach Manny Douglas. The team is bringing in lots of new talent led by receiver/safety Larry Turner-Gooden, who transferred from Calabasas.

Poly made the Division 2 quarterfinals after a thrilling, gutsy comeback against Orange Lutheran last year. Replacing quarterback Mehki Jordan will be the team’s biggest challenge.

While the Lancers are losing some key pieces such as running back Cooper Vander Hill and linebacker Jonah Laban, they should still be solid. Orange Lutheran should have a strong secondary headlined by RJ Regan and Bryce Phillips.

The Falcons won the Southern Section Division 5 title and then knocked off Division 4 champion San Juan Hills to make the CIF State finals a year ago. Led by super sophomore lineman Francis Mauigoa, the Falcons will be very good again in 2020.

Vista Murrieta was a Division 1 quarterfinalist in 2019. The Broncos should be a Division 1 playoff team again in 2020.

The Yellowjackets went 10-2 and nearly knocked off Aquinas in the Division 5 semifinals. Outside of running back Xavier Harris and wide receiver Aaron Fontes, most of their main pieces are returning as upperclassmen.

The Cubs turned what looked like a rebuilding season into a Division 4 finals run in 2019. Loyola returns numerous playmakers in 2020 including an elite corner tandem in Ceyair Wright and Zakhari Spears.

Rancho Cucamonga lost a ton of seniors, especially on offense, but on the defensive side, they have several key returners. They include linebacker Landon Toll, defensive backs Tristyn Flores and Zion Brown, and defensive lineman Esaia Bogar.