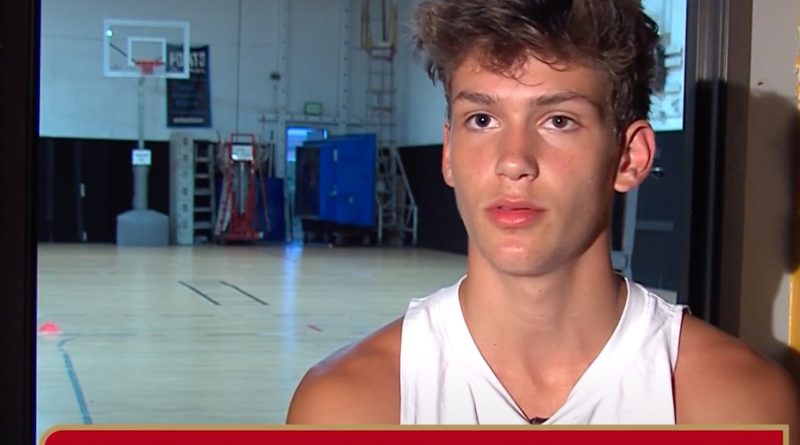 With a smoky fireball-red sunset as a backdrop, Aidan Mahaney strolls confidently into a small warehouse gym in Concord.

The basketball court is smaller than regulation with the walls closing in on the sides. This is the place where young basketball stars practice in a world where a pandemic governs what we all can and cannot do.

Mahaney will tell you he’s a winner. The Campolindo High School junior point guard has won at every level; he accepts nothing less. As a freshman he helped his high school team win a CIF state title. The 15-year-old teamed with his brother, Carter, and a talented Campolindo squad that ran past Colony (Ontario) 55-40 in the 2019 CIF Division II state championship game to claim the program’s first state championship. Aidan Mahaney shared the scoring lead with teammate Emmanuel Callas, scoring 19 points and grabbing 9 rebounds.

This past winter the Cougars were headed to state once again. A year older and even more confident, Mahaney was looking at nothing less than a second straight state title.

“I told my seniors right before the season started … I told my brother and the other two seniors we’re not ending this season without a ring,” said Mahaney. “That was really big for me and that confidence you gain from working out a bunch and putting in the time.”

Mahaney helped lead the Cougars to the 2020 Northern California Division I title game where they squared off against mighty De La Salle. The seventh-seeded Cougars built a 13-point first-half lead against the second-seeded Spartans, and held off a second-half comeback to win by five. The team was jubilant, knowing they were headed to their second straight CIF state title game. And then …

Mahaney was in class when he heard the news. The coronavirus had been declared a global pandemic. The state championship game was canceled.

Mahaney was so distraught he left the class and walked the hallways at Campolindo, beaten by an unseen virus, an adversary he could not defeat.

“I felt even worse for my seniors,” Mahaney said. “All of a sudden it was over for them.”

Now Mahaney works out in this tiny gym, working on his game with a trainer. The AAU basketball season was also canceled and recruiting is now an adventure. When college coaches were finally allowed to reach out he received several calls right after midnight on the first day.

Mahaney already has several Pac-12 offers, including Stanford and Arizona, and has the grades to play at a top academic school. Only a junior, he has plenty of time to decide. At 6-foot-2, he is a highly skilled ball handler with great leaping ability and a confident three-point shot.

The Cougars will dedicate their efforts this season to the seniors denied a chance at a second state title last season. With Mahaney leading the way, and several returning players from last year’s talented squad back in the fold, the Cougars look like winners once again.