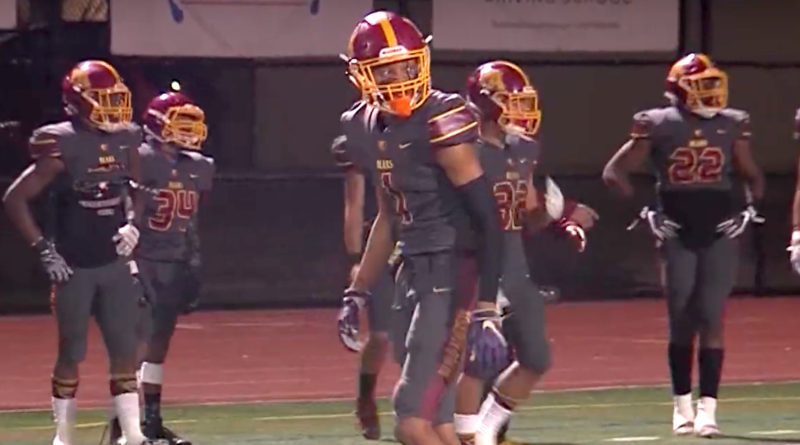 With the 2020-2021 California high school football season on the horizon we’re taking a look at the top players in the state.

Here are the Top 10 seniors (class of 2021) in Northern California.

Editor’s note: This is the first in a weekly series of stories from 49ers Cal-Hi Sports that will highlight student-athletes across Northern California.

The best wide receiver in California, and the third-best pass catcher in the nation, Troy Franklin is a tall, lanky receiver with good top-end speed. Franklin’s speed is deceptive, but we have seen him run away from lots of non-believing defenders. Franklin’s crisp routes and dance-like footwork lets him disappear like my best friend when the bill comes. Troy is a natural pass-catcher who can stretch the field or take a short pass the distance. He is also a skilled return man. Franklin is committed to Oregon and will likely leave high school early to join the Ducks this spring.

Brock Bowers weighs in at 225 pounds and stands 6-foot-3. He boasts elite-level athleticism, clocking a 4.5 40 as a sophomore and a 40-inch vertical. Has the speed to burn a linebacker and separate from a defensive back. Bowers is rated as the No. 2 tight end in the nation. He was asked to play a variety of positions in high school allowing him to learn the game from different angles. Bowers had 1,100 receiving yards in his junior season. He turned down three Pac-12 schools to play for Georgia next season.

Prophet Brown is lightning quick with a 100 time under 11 seconds. With great fundamentals, Prophet has the skills to be an elite player at the next level. As a cornerback, he can matchup against tight ends or wide receivers, and is a fast downhill runner. If he can work on his power, Brown will be one of the most complete players at his position. Prophet chose USC over Cal, Arizona State and Michigan.

We first interviewed Terry his sophomore year. He was big then, but unassuming. Now Jermaine’s size is what stands out when you see him play. Standing at 6-foot-4 and 235 pounds, Terry is too big for cornerbacks to cover but too fast for most linebackers. Known for physically dominating players who guard him, he can dominate the game. Terry grew up in a tough Richmond environment, but he’s kept a solid outlook on life despite what he has seen around him. A great character guy, Terry will stay close to home at Cal.

Akili Calhoun finishes his outstanding career as a four-year starter for the Lions in Brentwood. He has seen great success at Liberty playing across the ball from Oregon QB Jay Butterfield. Calhoun had four sacks and averaged 3.3 tackles a game as a junior for the Lions. Calhoun also excelled on the track team competing in the shot put and discus. He chose Cal over four other Pac-12 schools.

The Cardinal is thrilled to have this smart, athletic, mobile quarterback. Patu can throw and run with a 6-foot-4 frame. It’s this combination of speed, size and a smooth throwing motion that make him so special. If he puts on weight — he’s currently at 185 pounds — Fatu will be a force to be reckoned with at the next level. He comes from an outstanding program at Folsom where he shared time last season with a senior.

Kaleb Elarms-Orr has a long, athletic frame with the ability to play inside our outside linebacker or grow into a hybrid edge rusher. His agility is special at his position as he can move laterally quickly. He has the power to get past blockers. Needs to continue to develop an arsenal of moves as a true pass rusher. At 6-foot-3 and 222 pounds, Elarms-Orr has the size to succeed. He is deciding from among five offers: Boise State, Cal, Colorado, Kansas and Air Force.

Pulealii plays right tackle but could be a guard in college. At 6-foot-4 and 300 pounds, he constantly overpowers defenders with his weight advantage and good hands. He has light feet and is able to move fast for his weight. Plays with a strong anchor, has good functional strength and uses his hands well. Pulealii had his choice of schools but went with UCLA over contenders Arkansas and Arizona State.

At 6-foot-2 with good speed Kaleb Higgins looks to be a force in college. He benefited from playing at Folsom where he had to go against some top level wide receivers and savvy quarterbacks. Higgins has the raw skills to really develop into something special. His height and frame make it hard for receivers to beat him deep or in press. He chose Cal over Arizona, Arizona State and Boise State.

While he doesn’t have the weight to be a defensive end, Schweitzer has the pass rushing ability to stand up off the edge and get to the quarterback while also dropping into coverage to cover tight ends and backs. His adaptability allows him to move well in space and cover a lot of ground. He was a monster at Los Gatos with 130 tackles his junior season. He also played baseball for the Wildcats. Schweitzer will play at Notre Dame next season.