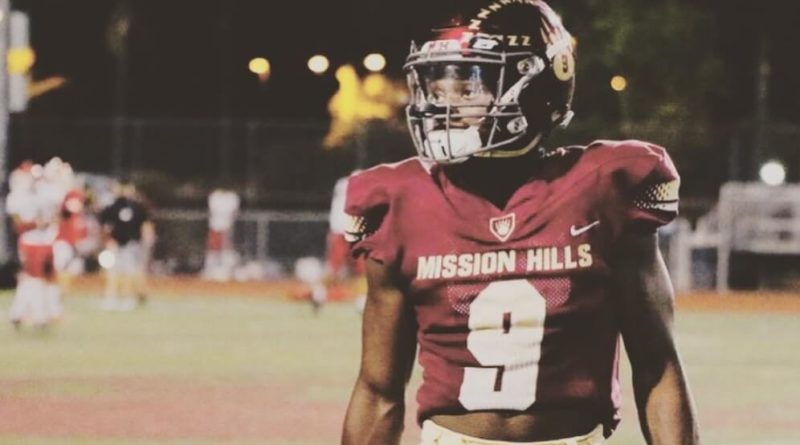 When the CIF State office announced the revised calendar on July 20 — which pushed the start of the high school football season back to December — the easy response from high school athletes would have been to show frustration and self-pity.

Instead, the reaction from San Diego Section athletes has been to focus on the positive aspects of the situation.

Mission Hills defensive back Elisha Lloyd is coming off an impressive junior campaign that yielded him close to 20 scholarship offers from schools across the country. And he sees an opportunity to work on his craft before practice starts in December.

“I was kind of bummed out, but I view this as more time to get better for the season,” Lloyd said.

Despite not getting to take any offseason college visits, Lloyd announced his commitment to Washington State in late June.

Westview defensive lineman Mandela Tobin had been excited for his senior season with new head coach Jason French leading the Wolverines. Tobin and his teammates weren’t able to get together on campus during the last few months, but that hasn’t stopped them from being productive.

“We were doing unofficial practices led by our team leaders at the park right next to our school,” Tobin said.

Tobin took the CIF news in stride, anticipating that the season would be pushed back.

“It was just a case of always expecting something,” Tobin said of the calendar changes. “I sensed this from a mile away because with California just being a hot spot for COVID-19, I thought it was a no-brainer that they were going to push back the season.”

“I was predicting that they weren’t going to cancel the season totally,” Tobin added. “To me it’s not a very big deal. I just see more time to grind and get better for January.”

Tobin dominated up front last season for Westview, leading to offers from several schools over the past few months.

“For me, committing a little bit earlier than planned is the way to go as of now since so many spots are being taken up and just with the season being so late,” Tobin said of his recruitment.

Not being able to take campus visits over the last few months has thrown a wrench into the recruiting process for the majority of recruits, but Tobin has been pleased with how colleges have been able to adapt.

“With visits, the sole purpose is to make sure you feel at home with a school,” Tobin said. “So, to not have that it’s going to be really hard to decide. But at the same time you always have to improvise.”

“I’ve done some (virtual tours), especially with Nebraska, Kansas and some others as well. We’ve just been doing that, and I’ve been enjoying them, and I think they’re really good. As long as we continue to do that, we’ll be fine.”

Mater Dei Catholic wide receiver Jessie Campbell put on the helmet and shoulder pads for the first time as a junior in 2019 and quickly made a big impression. He finished the season with 19 catches for 397 yards and four touchdowns, and is poised for an even bigger season in 2020-21.

“At first I was actually shocked because I wanted to play so bad this year,” said Campbell. “And then I saw it get pushed back to December and thought ‘alright it just gives me more time to work on my grind and stay ready and just push.'”

Campbell’s performance last season has led to scholarship offers from seven schools at this point.

“It’s been actually going really well,” Campbell said of the recruiting process. “I still talk to coaches every day and talk to the same colleges every day.”

Like Mandela, Tobin and many others, Campbell is adjusting to the new ways of recruiting and virtual campus visits.

“It’s been very different,” Campbell said. “I go on Zoom and have these virtual visits, so I feel like I’m still staying connected with these coaches and just have to continue to build these good relationships with them.”