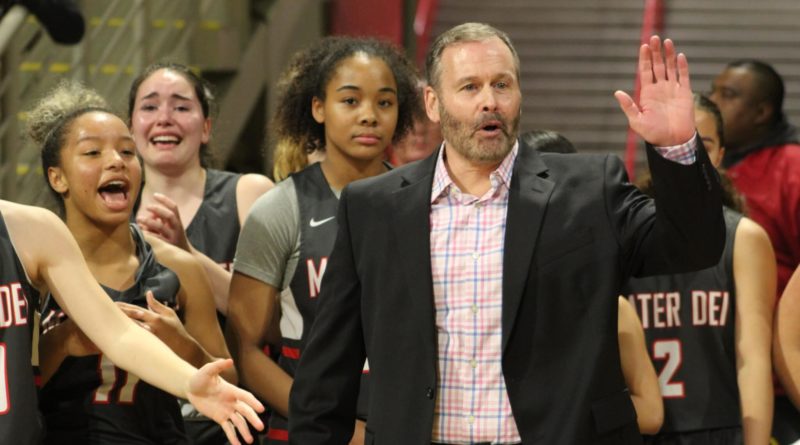 Before leaving last summer to coach at her alma mater, Cal Lutheran, Kelli DiMuro was working up a dynasty at Chaminade.

The Eagles won four titles last decade, breaking through for their first ever ring in 2013, at which point DiMuro had been their head coach for 16 years. Chaminade then went back-to-back at the Open Division level in 2015-16 and won Division 1 in 2019 before she left. They also won two state titles during that stretch.

Jim Martin had big shoes to fill when he became the Hawks’ head coach shortly after they won their first ever championship in 1997 under Lynn Taylor. They quickly got back on the board with another title in 2000, and went on to win again in 2007, 2008, and 2012. Martin is still Laguna Hills’ head coach to this day.

While St. Joseph is no longer in the Southern Section, Ed Torres will long be one of the only CIFSS head coaches with a three-peat to his name. The Knights won it all under Torres from 1989-91, including a state title in 1991, and then again in 2010.

After serving for a long time as an assistant coach to his friend Tony Matson, Tom Howard stepped in as OLu’s head coach when Matson passed away in 2009. The Lancers racked up four titles in the span of a decade under Howard, with rings coming in 2011, 2015, 2016, and 2019. Despite winning it all in 2019, Howard went out on a high note and retired from coaching, at least temporarily. However, he still teaches theology at Orange Lutheran.

All of Kevin Blue’s championships as a head coach came via the ultra rare four-peat. Pilgrim won a title every year from 1996-2002, except 1998. For the last four of those chips, Blue was at the helm.

Speaking of St. Bernard, Lori Pawinski left after their 1997 title run, but the Vikings didn’t lose a step. They won another four championships under head coach Felicia Simon soon thereafter, coming in 1998 and via a three-peat from 2000-02. The 1998 run also included a state title.

Trenton Jackson was at the helm for the better part of a dominant run for the Mustangs. They pulled off one of only two six-peats in Southern Section history from 2003-08, and Jackson was the head coach for the last four of those title runs.

Up until last season’s championship under Camille Buckley, all of Bishop Amat’s titles had come under Richard Wiard. Under his guidance, the Lancers won it all in 1999, three-peated from 2004-06, and won another championship in 2012.

With six championships last decade, Windward has a very strong case to make as the section’s top program across that stretch, and Vanessa Nygaard is largely to thank.

After the Wildcats won it all in 2011 under Steve Smith at the Division 4 level, they won again in Division 4 in 2013 with Nygaard as their new head coach. Then they made CIFSS history by jumping straight to an Open Division championship in 2014 and completing the three-peat in 1-AA the next year. The Wildcats got back on top – the very top – with back-to-back Open Division titles in 2018-19 and made the Open Division finals again in 2020. Nygaard has five section titles in addition to two state titles to her name, and is likely to add more sooner than later.

All five of San Clemente’s championships came in a short stretch of time under head coach Mary Mulligan. The Tritons four-peated from 2001-04 and won it all again in 2007.

Perhaps even more impressive is Buggs’ track record with state titles. Unbelievably, the Jackrabbits pulled off a CIF state four-peat in Division 1 from 2006-09 when Division 1 was the highest state division. They won another Division 1 state title under Buggs in 2013 (Open Division era) before winning yet another state title the next year in the Open Division.

As the head coach at Palos Verdes, Wendell Yoshida won section championships in 1988 and 1991. He subsequently became the head coach at intracity rival Peninsula, and the Panthers won it all the next year in the highest division (I-AA) in an undefeated 33-0 season that culminated in being named national champions by USA Today. Pensinula also won I-AA championships under Yoshida in 1996, 1998, and 1999.

Yoshida eventually retired from his coaching spot but stayed on as Peninsula’s athletic director until this past spring. He holds not only the rare distinction of six championships, but also winning back-to-back state titles with two different schools (1991 and 1992).

When Redondo Union won their section’s title in 2000, it was one of the most historically significant championship runs in CIFSS history. It was the first ever title for both the Seahawks and head coach Marcelo Enriquez – a program and a coach that have gone on to establish themselves as all-time greats within the section. Also, their single-digit victory snapped Brea Olinda’s record-shattering streak of 11 straight titles, which may never be broken.

The Seahawks haven’t looked back, winning five more sectiono titles since then with the most recent one coming in 2018, the year they also won a state title.

Under Jay Cowitz, Mission Prep reeled off six titles in less than a decade between 1989-1996. That includes a four-peat from 1993-96. Mission Prep is no longer in the Southern Section, but because of Cowitz, the Royals will be among the CIFSS’s leaders in section championships for a long time to come.

The aforementioned Brea Olinda dynasty started with head coach Mark Trakh. They lost three straight title games from 1983-85 before Trakh and his Ladycats finally got over the hump in 1986. Then they won it all in 1989 and never failed to win a title again under Trakh, who stuck around through 1993. Not only did the current USC head coach help bring Brea Olinda six titles, but he left the program in fantastic shape to win many more going forward.

The first coach in CIFSS history to win two state championships and the second to win six section titles, Joe Vaughan was arguably the first coach to establish themselves as an all-time great. His success at Buena came persistently over time, with their first ring coming in 1979, second in 1984, and four more in the 90’s.

For his success on the floor and legacy of touching lives off the floor, Vaughan is widely considered an integral figure within Ventura County for his work at Buena. And up until recently, his 765 wins were the most in California history. Against only 112 losses, he had the best record in California history at the time of his retirement.

Current Harvard-Westlake head coach Melissa Hearlihy has quite a few claims to fame. She’s tied for fifth place in CIFSS history with six championships; she’s one of only three coaches to win six total titles coming from multiple schools; she’s third in Southern Section history with 763 career wins, and only needs three to overtake Joe Vaughan for second; and she’s the only head coach in CIFSS history to have a career of 30 or more years coming from multiple schools.

Eleanor Dykstra had one of the most remarkable careers in SoCal high school athletics ever.

To start with, her nine CIFSS basketball championships puts her in the top four all time. She was the first ever Southern Section coach to reach six, seven, eight, or nine championships, with chips coming in 1982, ’85, ’87, and ’92-96. Her total of 665 wins and record of 486 games above .500 with one school are the second highest figures ever behind Joe Vaughan. She also won back-to-back state titles in 1995-96.

But in some ways, that’s just the tip of the iceberg. When Dykstra started at Valley Christian in 1968, she was not only the girls basketball coach, but also the softball, volleyball, and track & field coach – making her the coach of all four girls sports they offered at the time. She won back-to-back titles with the softball team in 1994-95, giving her four total titles in two years. And when you factor in all three team sports, not even including track & field, Dykstra won over 1,000 total varsity games as a head coach in her 41-year career.

One of the winningest all-time coaches who’s still going strong, Ellis Barfield has been at the helm for nine of Lynwood’s last 10 section titles. Under Barfield, the Knights have gone back-to-back (1993-94) and four-peated (2001-04) at the I-AA level when it was the highest division of the Southern Section. They won another I-AA title in 2006, marking seven section championships at the top division. And they also went back-to-back in Division 2-AA in 2012-13.

Barfield is also in rare air with four state championships, three coming at the highest division. With a total record of 610-149, Barfield has the third most wins and third best record for a coach of only one school in section history. And with 26 seasons under his belt at Lynwood, he’s in the top five for most seasons with one school.

Lynwood is an elite program to this day and will likely continue to contend for upper-division titles for years to come. In the coming years, Barfield could conceivably go on to challenge for many all-time CIFSS coaching records before the end of his career.

When Jeff Sink stepped in as head coach of the Warriors before the 1994-1995 season, the pressure was on. Brea Olinda had won titles every year since 1989 with two different coaches before him.

Sink and his program did not miss a beat, as they won a title his first five years in a row as head coach before falling to Redondo Union in the 2000 finals. By winning the 1995 championship, Brea Olinda became the only program to this day to win seven titles straight. And in the four years following, they extended that record to 11.

But they didn’t stop there. The Warriors bounced back in 2001 to win another title, and they won four more under Sink in 2004, 2006, 2009, and 2010. As a result, Brea Olinda’s 17 total titles is a mark far and away ahead of all other Southern Section programs – a record they may hold indefinitely even if they don’t get back on top any time soon.

Sink topped out with a whopping 10 section titles, the most ever at the time they reached number seven in 2010. When he retired in 2017, he was still tied for number one all time in CIFSS championships. He also finished with an amazing five state championships. But there is now a new lone holder of the all-time Southern Section coaching titles record.

Then when Mater Dei won the Open Division title this past spring, he became the first and only coach to win 11 CIFSS titles. He has the most wins ever, with by far the best record ever – 805-103. Kiernan is over 700 games over .500, and has a career winning percentage of 88.7%. No other coach has coached three teams in their career and amassed 600 wins. He also has five state titles to his name.

If the Monarchs can stay at their all-world level, Kiernan could continue shattering records and setting new ones that are leaps and bounds ahead of the current ones. Last season, they played arguably the hardest schedule in the country and still went 30-3 with an Open Division title. They will enter next season as the clear favorite to repeat and win a state title. If Mater Dei’s supply of talent and ability to deliver stay at this level, there’s no telling what statistical feats Kiernan and his Monarchs can accomplish in the years to come.