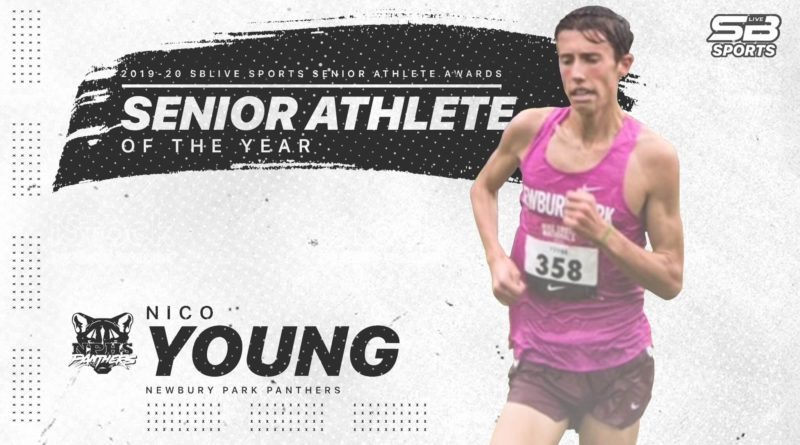 In the search for the overall Southern California boy and girl senior athletes of the year, SBLive’s Lance Smith and Connor Morrissette considered athletes who not only led their teams to winning seasons, but also dominated the competition.

Newbury Park cross country star Nico Young stood above the rest, and he has been selected as SBLive’s Southern California Senior Boy Athlete of the Year.

“I’m trying to think,” he admitted in a recent phone call. “I lost a mile race that was pretty early in the track season last season.”

Since then it’s been nothing but domination. Young has not only beaten the field in every high school race he’s run since, he’s obliterated multiple national records.

In the fall, he ran 13:39 at the Woodbridge Cross Country Classic, the fastest 3-mile time ever by a high schooler. In December at the Nike Cross Nationals, Young set a new course record with a time of 14:52.23, helping Newbury Park secure a national title.

Even when Young loses, he wins. The high school senior entered a professional 3,000 meter race in February that included a field headlined by 2017 NCAA cross-country champion Justyn Knight and 2019 outdoor national steeplechase champion Hillary Bor. Young’s goal was to break the national high school 3K record and although he finished in last place, that’s exactly what he did. He crossed the finish line at 7:56:97, 2.5 seconds ahead of Drew Hunter’s old record-setting mark. Young was only 10.6 seconds behind Knight, who won the race.

On June 23, Young attempted to set the national high school 5K record set by Galen Rupp in 2004 (13:37.91). Due to the coronavirus, Young had to run the race on a track — his first ever 5K on a track — at Franklin High School in Portland, Oregon. Due to injuries and schedule conflicts, Young didn’t have any runners to pace him, but he still blew away the five-person field, winning with a time of 13:50:55. That’s the fourth-best high school time in history and a California state record.

PrepCalTrack.com editor Rich Gonzalez, who has been covering track and field and cross country for more than 20 years, said Young is at the top of the heap of “modern era” cross country runners.

“Like any sport, comparing across different eras can be tough,” Gonzalez said. “It’s like trying to compare a Michael Jordan against a Wilt Chamberlain. The games were different, and there have been some impactful rule changes as well. In terms of cross-country running, the four that stick out as being on another level are Nico (Young), Gerry Lindgren (1960s), Eric Hulst (1970s) and Lukas Verzbicas (a decade ago).

“Lindgren and Hulst competed when high school cross-country races were two miles in length. Nowadays, they are three. Also, high school national championship races did not become reality until the late 1970s, so the best were not brought together before then. … In the ‘modern era’ of post-1979 running, Lukas Verzbicas and Nico Young would share the crown as best cross-country preps in national history.”

Young had his pick of colleges, and he committed to NCAA cross country powerhouse Northern Arizona and coach Michael Smith in December. The Lumberjacks have won three of the last four NCAA Division I Cross Country National Championships.

“I think they have probably have the best coach in the country to coach me in distance running,” Young said. “They also have the best training partners because it’s the best team in the nation. The Flagstaff elevation played a role in my commitment too.”

Young has had so much success that other runners stop him to take pictures at meets. As he moves on to college and then a professional career, there will be more and more photo-ops, especially if he reaches the pinnacle of running.

“Going to the Olympics is definitely a goal.” Young said.