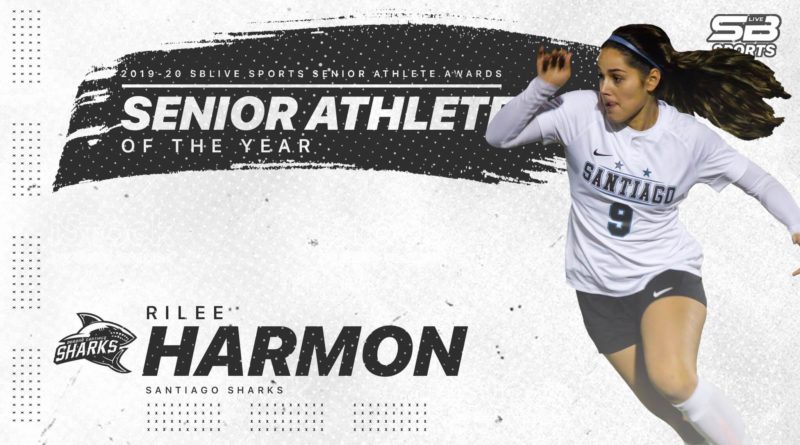 In the search for the overall Southern California boy and girl senior athletes of the year, SBLive’s Lance Smith and Connor Morrissette considered athletes who not only led their teams to winning seasons, but also dominated the competition.

Santiago girls soccer star Rilee Harmon stood above the rest, and she has been selected as SBLive’s Southern California Senior Girl Athlete of the Year.

In soccer, nothing is more gut-wrenching than a penalty shootout.

“Everyone was making every single one,” she recalled. “I took the first penalty kick and I made it and then next thing I knew it was 4-4.”

Following a fifth Santiago make, Sharks’ goalie Lynette Hernaez got her fingertips on the ensuing Upland penalty kick and pushed it off of the post and out. For the first time in Santiago High School history, the Sharks were Division 1 champions.

“It was so crazy,” Harmon said. “We did a dog pile and I’m pretty sure I broke my leg,” she joked. “It was awesome. Our whole boys’ team came and everyone was super hyped. It was awesome.”

In her final high school season, Harmon led Santiago with 22 goals and 13 assists as the Sharks compiled a 17-6-3 record. She was voted the CIF Southern Section Division 1 Co-Player of the Year. And now, she is SBLive’s Southern California Senior Athlete of the Year.

“We all trusted each other this year,” Harmon said. “I played with those girls for four years. We’ve been through a lot of ups and downs. Looking at last season and the year before, we did nothing compared to this year.

“We really connected and trusted each other, which was really cool.”

Harmon will play soccer at Cal next season.

“I’m so excited,” she said. “I’ve been training so much and just working really hard. I really hope it pays off. I can’t even express my excitement, I just can’t wait. Hopefully we get to have a season. I’ve met most of the girls already and I’m excited to play with them and then against some of my other club teammates that are going to Pac-12 schools.”