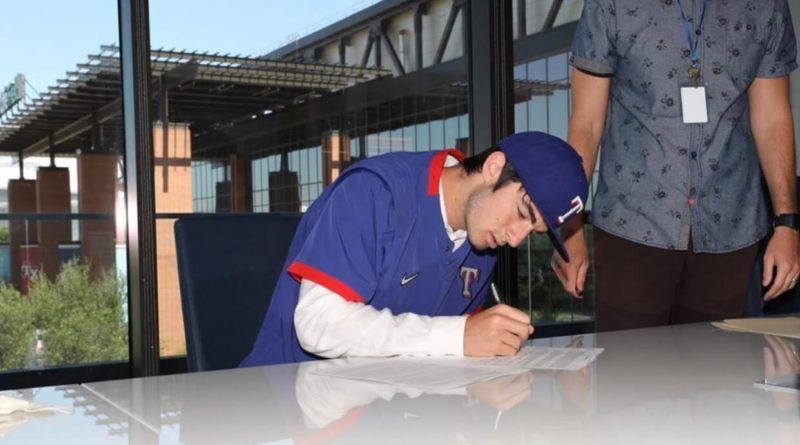 Carlsbad’s Thomas Saggese heard his name called in the 2020 Major League Baseball Draft earlier this month, but it wasn’t until this week that it became official.

The 6-foot shortstop traveled to Arlington, Texas to visit the team facilities for the first time and sign his contract.

MLB.com’s Jim Callis reported that Saggese and the Rangers agreed on a signing bonus worth $800,000.

Saggese hit .422 with 10 home runs during his junior season and had hit three during his first seven games before his senior season ended early, but he doesn’t go up to bat swinging for the fences.

“When I was 15, I was a good hitter, but it was more just line drives,” Saggese said. “Then I got the ball up into the air one time and it just kind of happened that way until now.”

With the coronavirus pandemic having shutdown baseball for several months and likely costing minor league baseball it’s entire season, Saggese isn’t sure when he’ll first get to suit up.

“They said I would go to instructionals sometime this year,” Saggese said. “They’ve sent me a workout plan, but I’m still waiting to hear.”

Saggese committed to Pepperdine following his junior season but made the choice to put college on hold and get his professional career started immediately.

“It was tough, I’d definitely fell in love with the school and coaching staff,” Saggese said of Pepperdine.

Several teams had expressed interest in Saggese prior to and during the draft, but it was the Rangers who were willing to step up and meet his asking price.

“I knew if I were to get drafted … I just want to have a good amount of money invested in me and I got pretty close to my number (from the Rangers),” Saggese said.

“It happens once in a lifetime and I couldn’t pass it up.”