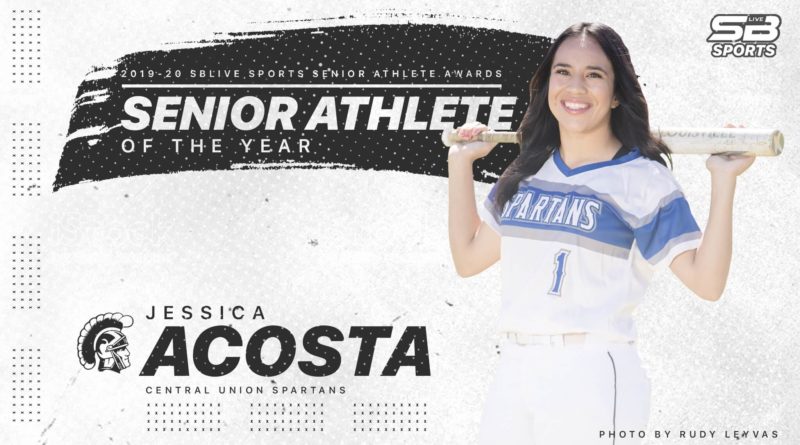 In the search for the Imperial County Girl Athlete of the Year, SBLive’s Bodie De Silva considered athletes who not only led their teams to winning seasons, but also dominated the competition.

Central Union softball star Jessica Acosta stood above the rest, and she has been selected as SBLive’s Imperial County Senior Girl Athlete of the Year.

The 2020 season was shaping up to be an exciting one for Central Union’s softball team and star infielder Jessica Acosta. The Spartans were 5-1 and had outscored their opponents by 54 runs to start the season.

“My favorite memory from my short senior season was probably the van rides to away games,” Acosta said. “We were always singing, laughing, and having a good time.”

Central came in to 2020 after a 24-12 season in 2019 in which they were able to capture an elusive league title and Acosta was named All-CIF during an excellent junior year.

“My favorite memory from playing at Central was winning the Imperial Valley League title for the first time since 2001,” Acosta said. “It felt great to be able to bring the title back to Central.”

Acosta was hitting .562 with three doubles and a home run to start her senior season before play was shut down because of COVID-19. She finished her four-year varsity career with a .500 batting average, 129 hits, and 32 stolen bases.

Acosta’s standout play caught the eye of college coaches early on, allowing her to commit to Ole Miss during her sophomore season.

“As soon as the campus tour of Ole Miss was over; I knew it was the right school for me. It was exactly what I envisioned when I thought about college,” Acosta said. “It was in an amazing small town, with nice people, good food, great academics, and it was in the SEC. It was just a dream come true because I have always dreamed of playing Division I softball in the SEC.”

Despite losing in the CIF Championship during her junior season and not having the chance for redemption as a senior, it’s the positives that Acosta will look back on from her time at Central.

“The thing I will miss the most about playing at Central is being coached by my dad and coach Marissa,” Acosta said. “They expected nothing but greatness each time we stepped on the field and they made us not just better players, but better people.”

“They instilled in us that mediocrity is never acceptable, they have helped shape me into the person and player I am today.”