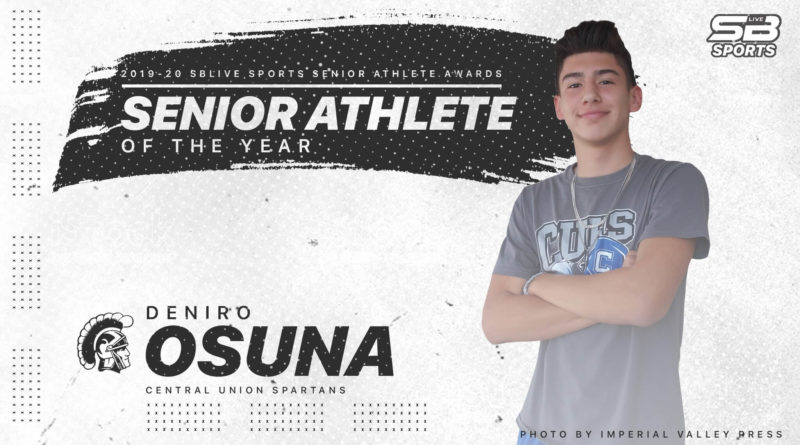 In the search for the Imperial County Boy Athlete of the Year, SBLive’s Bodie De Silva considered athletes who not only led their teams to winning seasons, but also dominated the competition.

Central Union quarterback Deniro Osuna stood above the rest, and he has been selected as SBLive’s Imperial County Senior Boy Athlete of the Year.

When high school football resumes, the coaches in the Imperial Valley League will be very glad to not see Deniro Osuna on the opposing sideline.

The Central quarterback finished up his three-year run as the Spartans signal caller with a 32-5 record, including a 14-1 mark in league play.

“My favorite memory from my senior year has to be winning the bell game (against Brawley HS) and winning IVL (Imperial Valley League) for the final time in my football career,” Osuna said.

Osuna threw 73 touchdown passes and accumulated over 7,000 passing yards during his three seasons to go along with 11 rushing touchdowns.

“My favorite memory from playing two sports at Central would have to be having a really close relationship to people that I played both sports with,” Osuna said. “And being able to hang out with them every day.”

A four-year member of the varsity baseball team, Osuna hit .333 with a .522 on-base percentage during his junior season. He was named a captain of the team as a senior before the season was shut down after only nine games.

Osuna has committed to Fullerton College next season where he plans to continue playing football and baseball.

“Fullerton was the right choice because I feel like they would give me the best opportunity to succeed at the next level in both sports,” Osuna said. “I also think it’s a good choice because I am able to live with my aunt and uncle near the school.”

Osuna and his fellow seniors have made memories during their time at Central while setting a benchmark for those coming behind them.

“The thing that I’ll miss the most about playing at Central would have to be how the community gets together to watch the football games,” Osuna said.

“The community is so supportive and just brings out the best in all of us during the games.”