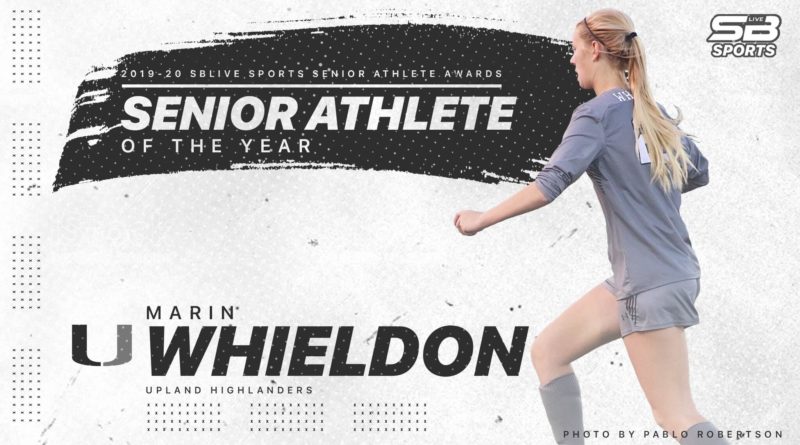 In the search for the Inland Empire Girls Athlete of the Year, SBLive’s Lance Smith and Connor Morrissette considered athletes who not only led their teams to winning seasons, but also dominated the competition.

Upland girls soccer star Marin Whieldon stood above the rest, and she has been selected as SBLive’s Inland Empire Senior Girl Athlete of the Year.

Marin Whieldon has no regrets about her final high school season.

Playing as a holding midfielder, Whieldon led the Upland girls soccer team to a 29-1 record, the best mark in the history of the school. Not bad for a team with low expectations heading into the 2019-20 season.

“This year I really wanted to push my team to get them where we needed to be, which was the best, and in the end we did everything we possibly could,” said Whieldon. “I couldn’t be prouder of that. It’s been an honor to be a part of this year.”

“We lost a lot of big seniors from last year’s team, so everyone this year was unmotivated to start the year,” Whieldon said. “We didn’t think we were going to be that good.”

What separated Upland from other teams was their superior work ethic.

“I needed to get my team to understand that we might not be the best, but no matter what we will push our hardest,” Whieldon said. “Through that, we started to believe that we could accomplish something special.”

And that’s exactly what happened. The Scots only allowed three goals in the regular season, finishing with a goal differential of plus-74.

“Goals against us were not okay,” Whieldon said. “It’s embarrassing. Everyone on Upland will fight to the death before a goal goes in. That was our mentality.”

Upland advanced all the way to the Division 1 Southern Section championship game in the postseason, meeting a 17-5-3 Santiago team. After a scoreless regulation and extra time, the match went to penalty kicks. Santiago won the shootout 5-4.

“I was hurting,” Whieldon admitted following the defeat.

But she knew her team’s season wasn’t over yet. By making it to the Division 1 championship game, Upland qualified for the Division 1 CIF State playoffs.

“After that game we came back on Monday and the captains sat everybody down before practice to say we need to keep pushing because us seniors don’t want to finish our career like this,” Whieldon said. “Everyone needs to stay motivated.”

In the first round of the CIF State playoffs, Upland beat Carlsbad 3-0. Then the Scots took down Cathedral Catholic 3-2 in the semifinals. In the regional final, Upland met JSerra. Whieldon scored the game-winner to give Upland a 3-2 victory and a regional championship.

“I’m so happy that we got to end on the best note possible,” she said

Over the last four years, Whieldon has played for her father, Bo Whieldon, at Upland. Although it was tough at some points, she truly enjoyed playing for her dad.

“Through soccer, he’s taught me basically everything I know,” Whieldon said. “He’s brought me so much success in my life. My sister Shayna played for him too and I wanted to experience what she experienced, going to Upland High School and playing for him. But I’m a little more difficult to coach than she was, so at times it was a challenge for us. I had to learn the balance between coach and dad, but I would not change it for the world.”

Whieldon will follow in her sister’s footsteps and play collegiately at Washington State.

“It’s a close-knit family-oriented college town and I love that about the school,” she said.