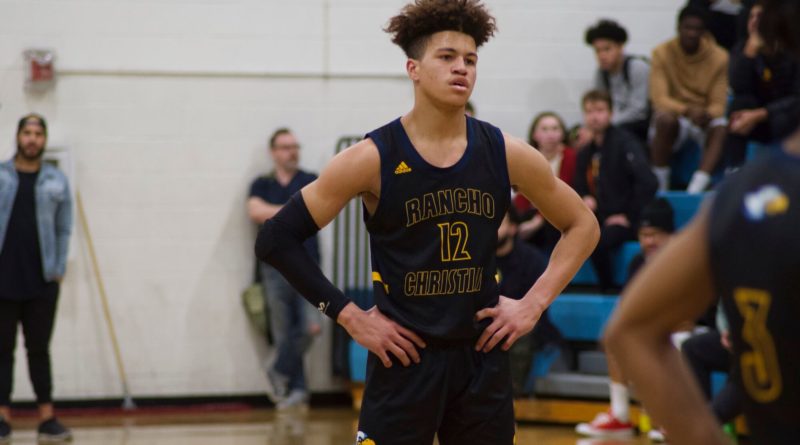 With the 2019-2020 school year officially over, many recent Southern Section graduates are gearing up to play college basketball. While the coronavirus pandemic may alter the 2020-21 college basketball season, it’s time to start looking towards next season – whenever it might be played.

The CIFSS puts out so much talent on a yearly basis that it’s common for very good Division I men’s basketball prospects to get overlooked. These three prospects will all be playing D-I ball next season, but are still underrated players. All three of them have the potential to be very successful at their next level of basketball, and may leave a lot of schools wishing they had recruited them when they had the chance.

A star player on one of the better teams in the country last season, it’s astounding that Devin Tillis still finished his high school career so underrated. He was wasn’t nationally ranked and didn’t get his first D-I offer until UNLV offered him during winter of his senior year, an opportunity he jumped on quickly.

Tillis averaged 15 points, nine rebounds, and four assists per game on a hefty 43% from three for the Southern Section Division 1 champion while also defending at a high level. Windward (28-8) made it to the CIF Division I state quarterfinals and finished well inside the top 50 of numerous national rankings.

Why was Tillis so under-the-radar? He lacks prototypical size for a combo forward, isn’t very flashy, and doesn’t have next-level athleticism. But at the end of the day, he has what it takes to be a very good player at the D-I level. He has an abundance of feel for the game and a high basketball IQ.

With good strength and defensive fundamentals, he will be able to guard many stretch fours once he adjusts to the college game. Also, he made major strides in defending quicker wings in space his senior year.

On offense, being a knockdown shooter in spot-up situations has never been at a bigger premium at any level of basketball, and his underrated point forward abilities present significant upside – especially if less coordinated power forwards have to guard him in space. Throw in his ability to play some bully ball against smaller wings, and Tillis could present matchup problems for both small forwards and power forwards down the road in college. His handles will sneak up on unsuspecting foes.

Mike Grimala of the Las Vegas Sun nailed it:

“The name that keeps coming to me while watching Tillis is Jared Dudley, the former Boston College star turned NBA journeyman. Dudley was an unathletic swing forward who made a difference by knocking down shots and being smarter and tougher than his opponents … Tillis is polished, skilled and knows how to win. [UNLV’s head coach] will be able to work with that, despite what the recruiting sites think.”

After a strong senior year at Rancho Christian, Jayce Catchings is next going to be suiting up for UC Irvine. He did get a 3-star ranking from 247Sports, but finished his high school career underrated and under-recruited. UCI was reportedly the only D-I school to offer him.

Last summer, Catchings transferred as a senior into one of the more crowded backcourts in California. He proved that he can fulfill the three-and-D meta and be a consistent role player on a great team. He was regularly tasked with guarding Rancho’s opponents’ top perimeter threats, and he held his own against some superstar prospects. But not everyone realizes that he was a 20+ PPG scorer who once dropped 44 in a game before transferring to Rancho Christian.

Catchings has more “microwave scorer” ability than he had the opportunity to show as an Eagle. That’s both as a ball-handler and shot-maker, as he can hit difficult shots from numerous parts of the floor with defenders breathing down his neck. If he can establish a rhythm at Irvine as a consistent low-usage two-way guy, he could get into the rotation quite quickly before even showing his full upside as a well-rounded scoring threat.

Coulibaly finished his high school career as a high 3-star prospect with six offers, but many of them didn’t come until late in his senior year. He ended up signing with a big-name high major, USC, but for a big man with his upside, he’s still underrated.

I went in-depth a couple of months ago about Coulibaly’s game and enormous potential. You can check out the full scouting report here. I posited that he’s the most underrated big man prospect in his class in SoCal with room to spare.

Despite having a thin frame, Coulibaly has “wiry strength” and plays very physically around the rim. He is a fundamentally sound threat in the post, he rebounds, protects the rim, and has enormous intrigue as a stretch big. San Gabriel Academy had a pretty difficult schedule and he led them to a 22-7 record, putting up 20/10 on a nightly basis.

SGA head coach Kevin McCloskey cited USC’s work with other stretch big men in recent years (such as Chimezie Metu) as a big reason Coulibaly chose the Cardinal N’ Gold. He already has an impressive, aesthetic mid-range jumper that could very well be stretched out to the college arc. Throw in good hands and solid downhill attacking in space in fairly limited attempts, and he has massive longterm upside that should’ve prompted many more teams to pursue him.