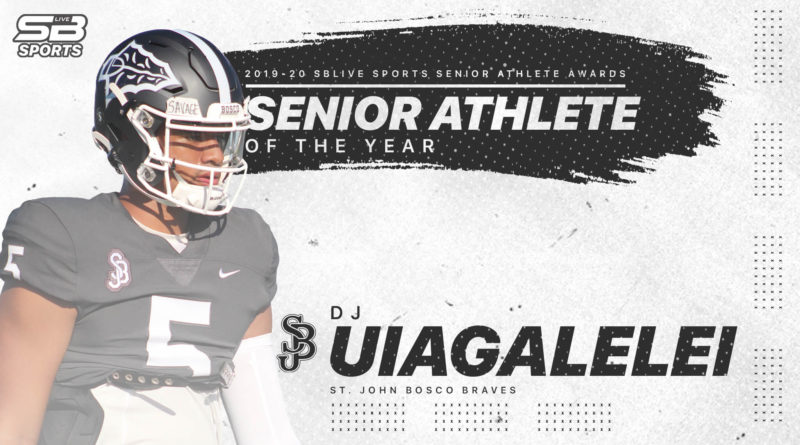 In the search for the L.A. County Senior Boy Athlete of the Year, SBLive’s Lance Smith and Connor Morrissette considered athletes who not only led their teams to winning seasons, but also dominated the competition.

St. John Bosco football star DJ Uiagalelei stood above the rest, and he has been selected as SBLive’s LA County Senior Boy Athlete of the Year.

Five-star quarterbacks don’t skip the prestigious Elite 11 Finals, the nation’s premier high school quarterback competition that takes place annually in the summer. Since the event’s inception in 1999, every elite quarterback recruit has participated.

That was until DJ Uiagalelei opted to skip the event last summer to compete in a passing tournament with his St. John Bosco teammates.

“For me, the end goal is not to win the Elite 11, it’s to win a state championship,” Uiagalelei said at the time.

Nearly a year has gone by since Uiagalelei made that call. It proved to be the right one.

Uiagalelei took his Braves team to the top of the high school football world in 2019 and for that he has been selected as SBLive’s L.A. County Senior Boy Athlete of the Year.

Uiagalelei received his first college scholarship offer when he was in sixth grade. He threw a football 79 yards as a sophomore at the QB Collective Camp. In addition to his football talents, Uiagalelei is also a high level baseball prospect who can throw a mid-90s fastball.

In the most respectful way possible, he’s a freak.

At 6-foot-4 and 246 pounds, Uiagalelei is a quarterback that’s built like a defensive end. As a senior at St. John Bosco, he threw for 48 touchdowns compared to just two picks. That kind of size and athleticism combined with such great production is stunning.

2023 NFL mock drafts (yes, those exist) all have Uiagalelei as a top five pick. From his arm strength and statistics to his leadership ability and humility, he checks nearly every box as a prospect.

Heading into his senior year, Uiagalelei did have one glaring omission on his All-America resume though. He had never led St. John Bosco to a Sectional and State title as a starting quarterback, falling to arch-rival Mater Dei in the postseason in both his sophomore and junior seasons.

That’s why he skipped the Elite 11 and that’s what motivated him to produce one of the best senior seasons in the history of California high school football.

St. John Bosco’s lone 2019 regular season loss came to Mater Dei. With the exception of Servite, the Braves steamrolled everyone else leading up to the postseason.

St. John Bosco and Mater Dei earned the top two seeds in the playoffs and when they met in the Division 1 Southern Section championship game, the Braves trailed the Monarchs 28-5 in the second quarter and 28-12 at halftime.

It looked like for the third consecutive year, Mater Dei would break Uiagalelei’s heart and there would be no postseason glory. For a nearly flawless college prospect, fairly or unfairly, that would be a flaw: never winning the big one.

But in the second half, St. John Bosco’s defense held Mater Dei to just six points and Uiagalelei threw four touchdown passes to lead the Braves to an incredible 39-34 comeback victory.

“We were just tired of losing, man,” an ecstatic Uiagalelei said following the game. “I’ve been looking forward to this for three years. We lost to them two years straight and I’m just so proud of my teammates. This was a total team effort tonight.”

The Braves went on to win a state championship two weeks later, beating De La Salle 49-28. In every set of national high school football rankings, St. John Bosco finished at No. 1 in the country.