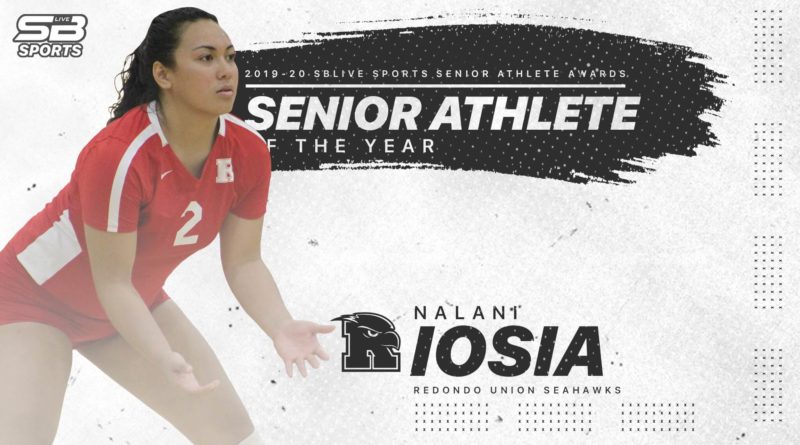 In the search for the L.A. County Senior Girl Athlete of the Year, SBLive’s Lance Smith and Connor Morrissette considered athletes who not only led their teams to winning seasons, but also dominated the competition.

Redondo Union girls volleyball star Nalani Iosia stood above the rest, and she has been selected as SBLive’s L.A. County Senior Girl Athlete of the Year.

A four-year girls volleyball captain at Redondo Union, Nalani Iosia remembers the challenge of winning over her senior teammates when she was just a freshman.

“I’m just here to win my spot and gain the respect from you guys,” Iosia recalls thinking to herself at the time. “The main way I did that was by winning drills and not being cocky about it.”

Even before Iosia entered high school, she had spent a lot of time in the Redondo Union gym. Head coach Tommy Chaffins allowed the younger Iosia to practice with her sister Norene and the rest of the Redondo Union team when she was in middle school.

“I really looked up to my sister because she was always the leader of every team she was on,” Iosia said. “That really helped me understand what being a captain was all about.”

When Norene graduated and went on to play collegiately at Hawaii, Nalani began her freshman year at Redondo. That season the Sea Hawks were eliminated in the second round of the CIF playoffs.

In the two seasons that followed, Iosia led Redondo to consecutive Division 1 Southern Section semifinals appearances. The Sea Hawks combined to go 70-10 over those two years but failed to win a title, twice losing to Marymount in the playoffs.

2019 was Iosia’s last shot at a CIF crown. Luckily this past year’s Redondo Union team was the most skilled of her four years.

“We just had a different vibe about us this year,” she said.

When at full strength, the Sea Hawks didn’t drop a set in the regular season. In the Southern Section playoffs, they only lost one set, which came in the championship, a 3-1 victory over Mater Dei.

“That’s one of the most unforgettable moments of my life,” Iosia said. “That was probably the most people I’ve ever played in front of, so winning was really exciting. I was really happy and everyone was crying. I wasn’t trying to cry because it was a happy moment.”

“I’m just excited to compete out there,” Iosia said. “To play with all of the amazing players on the team will be different, but I’m ready to experience it.”