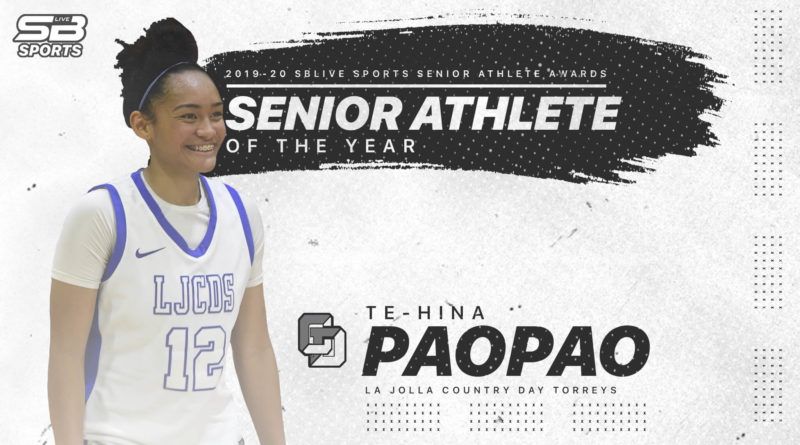 In the search for the San Diego County Senior Girl Athlete of the Year, SBLive’s Bodie De Silva considered athletes who not only led their teams to winning seasons, but also dominated the competition.

La Jolla Country Day basketball star Te-Hina Paopao stood above the rest, and she has been selected as SBLive’s San Diego County Senior Girl Athlete of the Year.

Two ACL tears limited La Jolla Country Day’s Te-Hina Paopao to just four games during her first two seasons for the Torreys, but she was able to save the best for last.

After beating Windward in the Southern California Regional Championship, the Torreys were on their way to play Archbishop Mitty in the California Open Division State Championship, before the COVID-19 pandemic shut down sports throughout the country.

The Torreys’ 15 previous section titles in girls basketball had either come in Division 4 or 5 until this past season.

Paopao, a 5-foot-10 point guard, averaged 23 points, eight rebounds, four assists, and three steals per game as a senior for the Torreys. The five-star recruit chose Oregon last May over several other West Coast schools.

“Oregon is the right fit for me because they have a winning culture and they care not only about basketball, but your life outside of it,” Paopao said.

The Torreys, who finished the year ranked No. 1 nationally by several publications, didn’t get to complete their incredible season as they may have hoped. But Paopao left her mark on the program, garnering multiple national player of the year honors.

Coach Terri Bamford, who has been the head coach at La Jolla Country Day since 1997, has seen the likes of Candice Wiggins and Kelsey Plum come through her program. And now Paopao has a chance to follow in their footsteps.

“The thing I will miss the most playing at Country Day is being coached by the greatest of them all, Coach Bamford,” Paopao said.