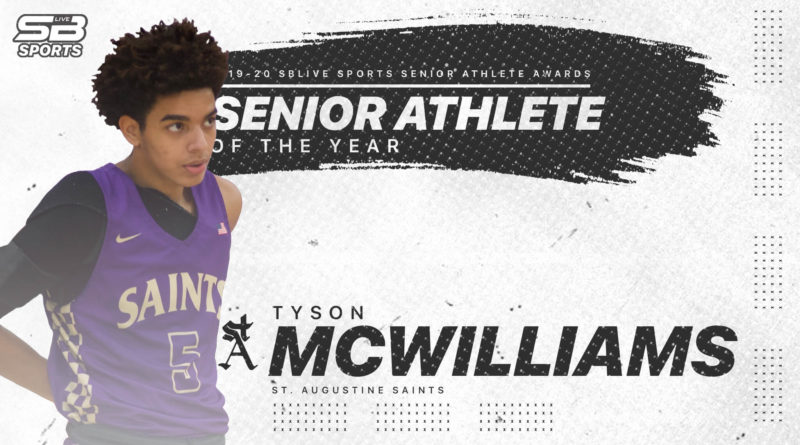 In the search for the San Diego County Senior Boy Athlete of the Year, SBLive’s Bodie De Silva considered athletes who not only led their teams to winning seasons, but also dominated the competition. Excelling in more than one sport was also taken into consideration.

St. Augustine football and basketball star Tyson McWilliams stood above the rest, and he has been selected as SBLive’s San Diego County Senior Boy Athlete of the Year.

Tyson McWilliams was a three-year varsity member of both the football and basketball teams during his time at St. Augustine, but it wasn’t until late in his senior year that he was able show his prowess on the hardwood.

For his dominance on the football field and his emergence on the hardwood during his senior season, McWilliams is SBLive’s San Diego County Senior Athlete of the Year.

“My favorite memory of playing the two sports would definitely be the Holy War (against Cathedral Catholic),” McWilliams said. “Getting to play your rivals not only in football but in basketball too.”

A three-year starter on the football team, McWilliams put up impressive numbers playing on both sides of the ball, plus special teams. He had 84 tackles and nine interceptions while playing cornerback, and 42 receptions and four touchdowns while playing wide receiver.

“The thing I will miss most about playing at St. Augustine is playing in front of the community,” McWilliams said. “We have a huge support system who comes out to games no matter what. I will always have a lot of love for Saints.”

After picking up double-digit NCAA Division I football scholarship offers from across the country, McWilliams committed to Cal shortly after his visit in October.

“Cal was the right school for me because it felt like home. The combination of high-level football with even higher-level education stood out to me,” McWilliams said. “And it was hard to say no.”