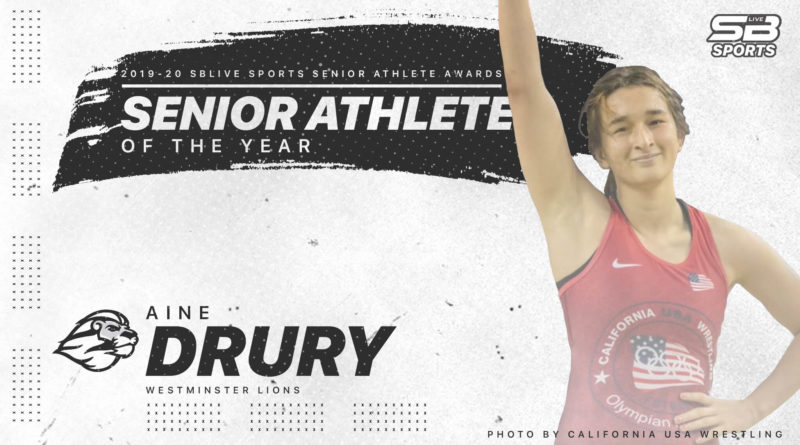 In the search for the Orange County Senior Girl Athlete of the Year, SBLive’s Lance Smith and Connor Morrissette considered athletes who not only led their teams to winning seasons, but also dominated the competition.

Westminster girls wrestling star Aine Drury stood above the rest, and she has been selected as SBLive’s Orange County Senior Girl Athlete of the Year.

RELATED: MEET THE SOCAL SENIOR ATHLETES OF THE YEAR

Aine Drury (pronounced Ahn-ya) was the top girls wrestler in Orange County in 2019-20. And it wasn’t close.

Drury was the lone girl from the county to reach a CIF-State finals match in addition to being a CIF Southern Section Southern Regional champion at 143 pounds.

Despite not being a state champion like she was as a sophomore, Drury had a lot of success in her final high school season. She was consistently ranked in the top five nationally in her 143-pound weight class. But you wouldn’t know it by talking to her.

“My year was alright, but honestly I expected a lot better,” Drury shared in a phone interview on Wednesday. “I have a lot to improve on, but I think I’m headed in the right direction.”

Drury won’t look back on her many wins from her senior season like she’ll reflect on her two 2020 defeats to Rowland junior Cheyenne Bowman, the girl who twice took down Drury in Section and State final showdowns.

“After the state final I was upset, but my coach (Mike Provenzano) hugged me and he assured me that he was very proud of me which was all I really cared about,” Drury said. “That was my best memory from this year. He put in a lot of work helping me and when he told me that my improvement was worth his time. That was very big for me.”

Drury and Bowman had met once before in their high school wrestling careers, with Bowman winning that match too. Battling such a tough opponent has helped Drury in the long run.

“Every time I go up against Cheyenne, it shows a new part of my game that I need to work on,” Drury said. “That’s part of the process. That’s how I improve. When she exposes a hole in my game, I fix it. Eventually I’ll hopefully catch up. Cheyenne is a great wrestler and I respect her for that. She’s always been nice and humble.”

For Drury, the sky is the limit. She only began wrestling as a freshman in high school after spending her childhood taking jiu jitsu.

“I feel like I’m still getting down the basics,” she said. “I still feel like a beginner in a lot of ways.”

Which is why she’ll have a chance to be special in her next four years at King University in Bristol, Tennessee. At Westminster, Drury only had three other girls on her team. She spent most practices battling it out with members of the boys team, including her younger brother, Caoilte.

“I’m so excited to be in a room filled with high level girls,” Drury said. “It’s going to be a huge advantage for me and will help me dial in my game.

“My goal is to become a national champion.”