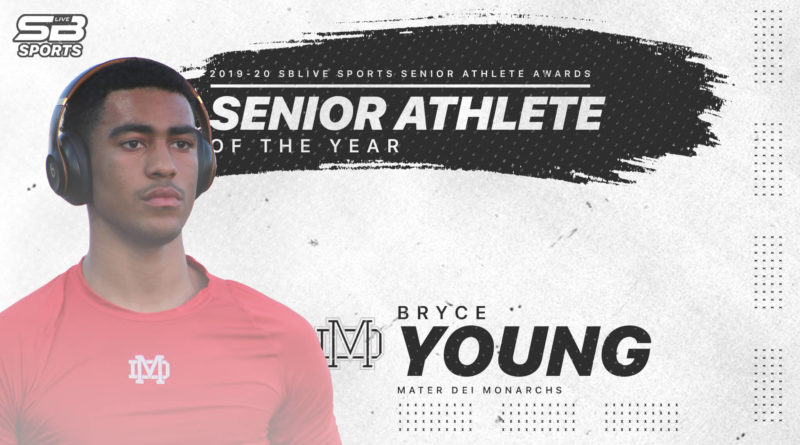 In the search for the Orange County Senior Boy Athlete of the Year, SBLive’s Lance Smith and Connor Morrissette considered athletes who not only led their teams to winning seasons, but also dominated the competition.

Mater Dei football star Bryce Young stood above the rest, and he has been selected as SBLive’s Orange County Senior Boy Athlete of the Year.

Mater Dei is the only high school in America that has produced two Heisman Trophy winning quarterbacks (John Huarte and Matt Leinart). Todd Marinovich, Matt Barkley and JT Daniels also suited up for the Monarchs.

So who’s the best Mater Dei quarterback of all-time?

When Young signed with Alabama on National Signing Day in December, Rollinson called his QB of the last two years “the greatest quarterback in school history.”

Young transferred from Cathedral to Mater Dei following his sophomore season. He led the Monarchs to a state championship in 2018 and a Southern Section Division 1 runner-up finish in 2019.

Even though Mater Dei fell short in their bid to capture three straight state titles, Young put together one of the best statistical seasons in state history for the 12-1 Monarchs. And for that he has been named SBLive’s Orange County Senior Boy Athlete of the Year.

As a senior, Young threw for 4,528 yards and 58 touchdowns while completing 71.9% of his passes. He rushed for another 10 touchdowns and threw just six interceptions. These video game-like numbers boosted Young to the No. 2 spot in the 2020 247Sports football recruiting rankings. He finished as the top-ranked quarterback in the country.

It has never been about individual accolades for Young, though. I’ve never seen a high school athlete more devastated following Mater Dei’s 39-34 defeat to St. John Bosco in the 2019 Division 1 Southern Section championship game. He’s been a true team guy at Mater Dei and his team’s success is really all he’s ever cared about.

“However I’m perceived individually doesn’t mean that much to me,” Young said in an interview in October. “To me, it’s about how Mater Dei is perceived and that we can win games. Program success is what’s important.”

Just because Young doesn’t care about his individual legacy, doesn’t mean he leaves high school without one. He made an indelible mark on the Mater Dei football program.

“His legacy as a Mater Dei quarterback will become legendary,” Rollinson said. “Bryce possesses leadership abilities that are advanced beyond his years and he has the unique ability to reflect the credit to those around him. Bryce’s competitiveness and confidence permeate through him.

“It was my honor to coach him.”

Young graduated early from Mater Dei and already has one semester under his belt at Alabama. He’s spending the summer in Tuscaloosa, where he has a chance to win the starting quarterback job whenever the 2020 college football season is played. The summer heading into his junior high school season, Young verbally committed to USC. He flipped his commitment last September.

“It wasn’t a decision that was easy,” Young said. “It didn’t come over night. It was a lot of prayer, thought and discussion with my parents. As a family we have a tremendous amount of respect for USC and the whole coaching staff there, but for me, Alabama was the better situation and I’m extremely excited to get there.”

He’s there now and already competing.

“There’s still a lot of work that I have to do,” Young said.