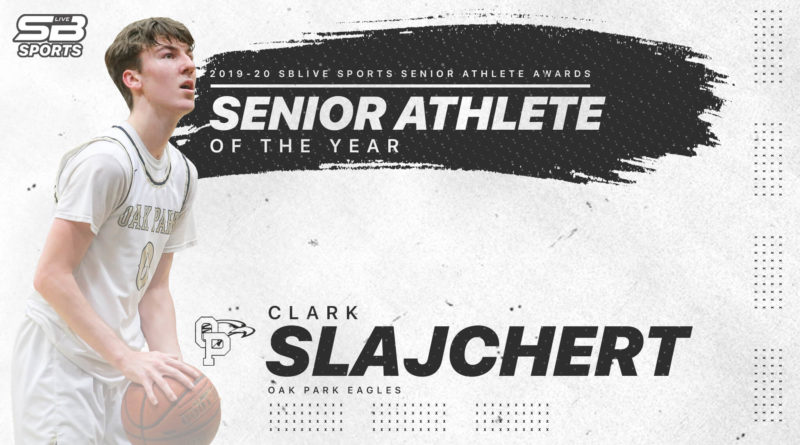 In the search for the Ventura County Senior Boy Athlete of the Year, SBLive’s Lance Smith and Connor Morrissette considered athletes who not only led their teams to winning seasons, but also dominated the competition.

Oak Park basketball star Clark Slajchert stood above the rest, and he has been selected as SBLive’s Ventura County Senior Boy Athlete of the Year.

The numbers speak for themselves.

That’s a remarkable resume from a kid who is exceedingly modest.

“Clark’s work ethic, competitive drive, and toughness have led him to great success on the basketball court, but you would never know because he’s an extremely humble person,” Oak Park head coach Aaron Shaw said.

Ask Slajchert about his high school basketball career and he’ll tell you his success was a product of Shaw’s “system.”

“I was really lucky to have a really good situation,” Slajchert said.

Yes, the system put the ball in Slajchert’s hands and he thrived, but he was so much more than a system player for the Eagles.

On February 12, Slajchert scored 56 points in a 107-103 double-overtime playoff win over Warren. He went 9-for-9 from the free throw line in the second overtime and 19-for-19 for the game.

“I’ve never been as tired as I was that night,” Slajchert said.

The 56 points are a single-game record at Oak Park. That’s one mark that Slajchert has all to himself.

As the youngest of four basketball-loving brothers, Slajchert was groomed to play hoops growing up.

“That definitely benefited me,” he said.

In his first two years at Oak Park, Slajchert played alongside his older brother Wes. Next season those two will compete against each other in the Ivy League. Wes is at Dartmouth and Clark will be at Penn.

“Our parents will have to figure out where to sit when we play, which will be funny,” Clark said.

Slajchert has certainly made his mark on Oak Park. Such a talented scorer and great teammate will be nearly impossible to replace.

“I have been blessed to coach him,” Shaw said. “He is a special person who will do amazing things at Penn.”