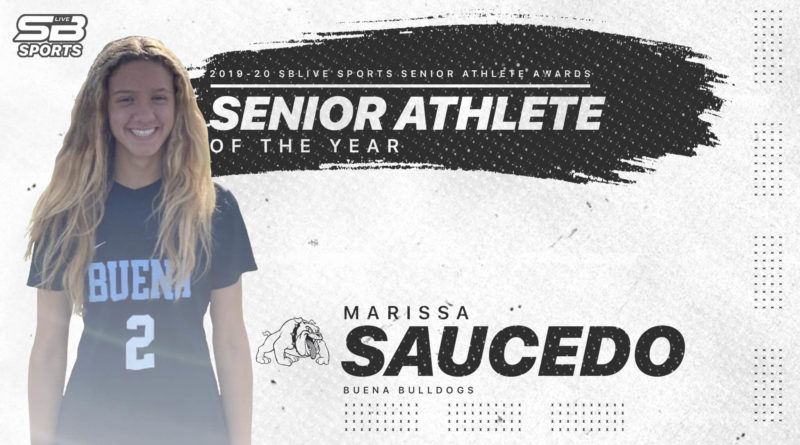 In the search for the Ventura County Senior Girl Athlete of the Year, SBLive’s Lance Smith and Connor Morrissette considered athletes who not only led their teams to winning seasons, but also dominated the competition.

Buena girls soccer star Marissa Saucedo had an outstanding senior season, and she has been selected as SBLive’s Ventura County Senior Girl Athlete of the Year.

Buena’s Marissa Saucedo didn’t play high school soccer as a junior, but returned as a senior and is now SBLive’s Ventura County Senior Athlete of the Year.

“I wasn’t allowed to play last year because of my U.S. Soccer Academy commitment and I was bummed, but I feel like I wouldn’t have had the drive I did this season if I had played last year,” Saucedo said. “Missing last year made high school soccer feel more new and fun this year. It was refreshing. I really loved the camaraderie I had with the girls.”

Saucedo came back with a bang in 2019-20, scoring a Ventura County leading 27 goals to go along with 10 assists. She led Buena to a 19-7 record and a co-Pacific View League title with Oxnard.

“I am incredibly proud of the team,” Saucedo said. “I couldn’t have had the success I had if it wasn’t for them.”

Saucedo had nine multi-goal games as a senior and four hat-tricks. In the Division 3 Southern Section playoffs, Buena fell in the second round to La Serna 3-1. Buena had three goals taken off the board in that game.

“I was super bummed especially because two of my own goals were disallowed and then one of my teammates who got hurt scoring had her’s called back too,” Saucedo said.

The highlight of Saucedo’s season was beating league rival Oxnard 1-0 in January.

“When we played against Oxnard, who was first in our league and we were second, Taylin Butterbaugh scored the winning goal,” Saucedo said. “That has to be my favorite moment from our season.”

Saucedo will continue to play soccer in college at UMass Lowell.

“I’m really excited for the challenge,” she said.