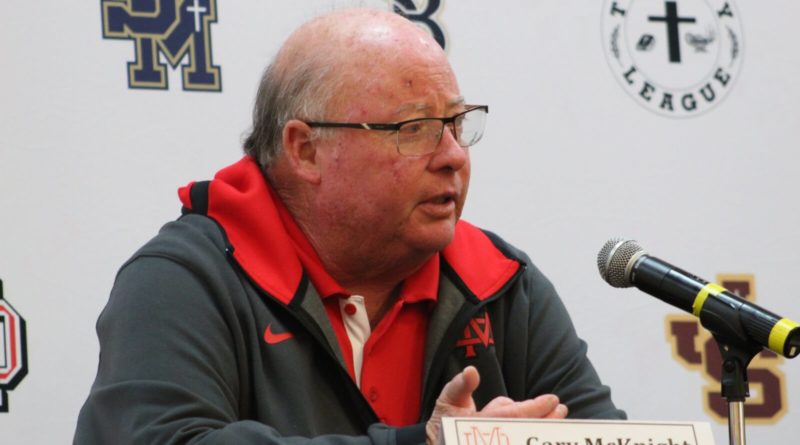 We took a look back through the archives to see which CIF Southern Section teams have won the most boys basketball section titles over the past 25 years. We found 28 teams that had won at least three championships over that span (1996-2020).

Here’s a look at those 28 teams. Titles that were later vacated were not included.

Fresh off a Division 1 title under head coach Colin Pfaff, the Wildcats are up to three titles in the past quarter century. The other two came in 2009 under Miguel Villegas and 2015 under Steve Smith.

With Tery Kelly in charge, Campbell Hall had a dominant run from 2005-2008, winning rings in all those years except 2006 when Gardena Serra knocked them off in the finals. The other constant outside of Tery Kelly? Future NBA All-Star Jrue Holiday.

Those were his four high school years, and he was a star on the varsity team in all four seasons. In 2008, he was the Gatorade National Player of the Year, and still won a title even with older brother Justin having graduated in 2007. On December 28, 2019, Justin, Jrue, and Aaron (a Campbell Hall star after his older brothers graduated) became the first trio of NBA players to share the floor in a regular season contest.

The Comanches won section titles in 2009, 2014, and 2015 under Nate Harrison. The last of those three titles came after a victory over Lawndale in a 103-98 double-overtime classic.

In the past 25 years, the Wolves have three titles, all coming under head coach Tim Sweeney. They repeated in 2008 and 2009 after Kawhi Leonard transferred in for his two upperclassmen years, and he was named California’s Mr. Basketball in 2009. Future NBA player Tony Snell was also a star on the 2009 squad. The other title came in 2014.

The Monsoons took home a title in 1999 under David Breig, and have won championships under Tony Davis in 2012 and 2019.

The Wildcats won titles in 2012 and 2014 under Sid Cooke, and just got their third this past season in dominating fashion under head coach Alon Margalit. Then they went on to make it to the CIF Division I state semifinals.

The Fighting Frogs won a title in 2010 under William Middlebrooks and now back-to-back titles under Reginald Howard.

Despite having a long tradition of basketball titles, Santa Clara only has three in the past quarter-century. Two came in 1997 and 1999 under Lou Cvijanovchich. But now they’re back on the board with a title only a year ago under Bobby Tenorio.

Montclair won a title in 1996 under Howard Abrams and then went back-to-back in 2005-06 under Greg Patterson.

Believe it or not, the Trailblazers only have three CIFSS titles in the past 25 years. The titles came in 2011 under Ryan Silver and in the past two seasons under Andre Chevalier. The odds are strong that they continue to skyrocket up this list in the immediate future.

The Knights won Southern Section titles in 1998 and 2004 under Ed Torres and in 2016 under Tom Mott. They switched to the Central Section along with 12 other Central Coast schools in the Summer of 2018 to cut down on intra-sectional travel.

Artesia won titles in 2003, 2006, and 2007, with the first two coming under Scott Pera and the third under Loren Grover. Running the show on the court in 2006 and 2007 was James Harden, who averaged over 18 points and three assists per game shooting well over 60% FG and snatching 7.9 RPG both seasons.

The Celts won titles in 2001, 2010, and 2015. The latter two were coached by Russell White and the 2001 title was coached by Dick Dornan, who is now the Sports Information Director of the L.A. City Section.

Crossroads has repeated twice in the past quarter-century, coming under Daryl Roper in 1996-97 and 2000-01.

Throughout their long, successful basketball history that has produced numerous solid NBA players, the Eagles have a total of 14 section titles. Five of them have come in the past 25 years, with back-to-back titles in 1998-99 and a three-peat from 2002-2004. The last of those came under DeAnthony Langston, and the first four were with Ronnie Gipson at the reins.

The 2002 and 2003 titles featured future NBA vet Amir Johnson. While they fall just out of our 25-year range, Verbum Dei also had back-to-back chips in 1994 and 1995 with Andre Miller running the point.

The Jackrabbits won titles in 1997, 2000, and 2002 under Ron Palmer before winning in 2004 and 2011 under Sharrief Metoyer and 2014 under Shelton Diggs. Their second-string power forward in the 2011 run was a sophomore Jordan Bell, who is now in the NBA and was a rotation player in the Golden State Warriors’ 2018 title run.

Before breaking through in 2000 under Doug Mitchell, the Knights lost in the finals three times in the 90s. Bishop Montgomery went on to three-peat from 2000-2002 – in unison with the Kobe-Shaq Lakers just a small handful of miles away – and picked up more chips in 2008, 2015, and 2017. The latter two were both in the Open Division and all six have come under Doug Mitchell, who is still going strong.

Every one of them came under head coach Dwan Hurt. Hurt passed away during the 2016-2017 season, and Serra held the 3rd annual Dwan Hurt Holiday Classic in December of 2019.

RHP won their first ever title in 1998 under head coach Brian Knigin, and have managed to win six more since then. They also three-peated under Knigin from 2002-2004, won in 2013 under Mark Fancher, and went back-to-back in 2017 and 2018 under Harvey Kitani.

The Wolverines are one of only three teams with eight championships in the past 25 seasons, and they also won in 1995 right before our cutoff.

Under Greg Hilliard, they three-peated from 1995-97 behind twins and future NBA players Jason and Jarron Collins, who happened to be backed up in the frontcourt by Jason Segel. Then they four-peated from 2002-2005 before winning one last title in 2011. Harvard-Westlake also won a title in 2017 under David Rebibo.

Throughout the entirety of the six-peat, Dominguez was guided by future NBA champions and All-Defense selections Tayshaun Prince (C/O 1998) and Tyson Chandler (C/O 2001). In the one season they played together, 1997-1998, the two made up one of the best frontcourts in high school hoops history.

Bragging rights for the top small-school dynasty of the last 25 years goes to Price. Under Michael Lynch, the Knights won eight straight titles from 1999-2006, and then went back-to-back in 2009 and 2010.

Six years later, Price won number 11 under Donnell Meekins. They also had three more section finals appearances throughout that span, including this past season, giving them 14 total appearances in 25 years.

With 13 championships coming in the past 25 years, Mater Dei is the only team in the Southern Section that can say they’ve won a section title more often than not.

All of those rings have come under the guidance of Gary McKnight, who has been at the helm since 1983. McKnight has well over 1,100 victories to his name.

Other teams that have won Southern Section titles in the past 25 seasons: