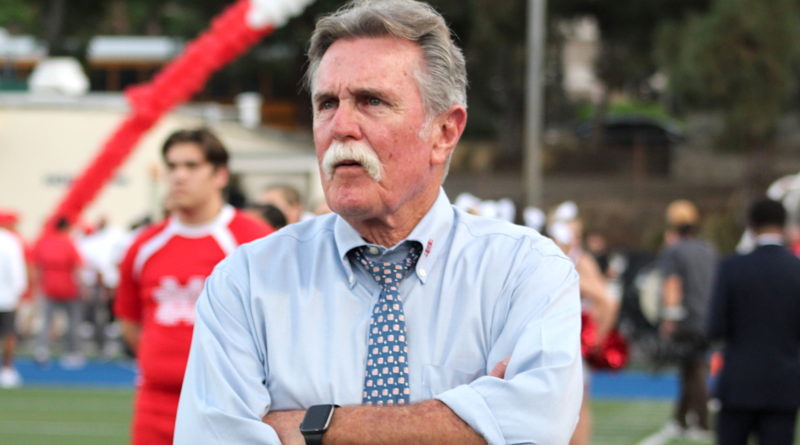 You may be expecting to see Hart’s Mike Herrington (300), Sherman Oaks Notre Dame’s Kevin Rooney (316), and Charter Oak’s Lou Farrar (319) at fourth, third, and second on this list. In 2019, they were three of only four active coaches with 300 wins or more in California. However, Herrington and Rooney retired after the 2019 season, and Farrar passed away in November.

Offensive mastermind Darren Bennett has been running the show for Tulare Union since 1995 after four years at Central Valley Christian (Visalia). And the way The Tribe are rolling on a yearly basis, he could be much closer to the top within just a couple years.

While it’s a great region for hiking, there’s not a lot to do in the small town of Colfax, which is about halfway in between Sacramento and Reno. So, they take their high school sports very seriously, particularly football.

Since 1995, Tony Martello has been turning out consistently good and great seasons for a team that often knocks off much larger schools come playoff time. He’s 220-68 for his career, and as recently as 2018, the Falcons had a 13-1 season ending with a state finals appearance.

Kelly King has racked up 224 wins as the head coach of Milpitas since 1993. The Trojans recently accomplished a fantastic feat, winning two state titles in the past three seasons.

John Tyree has coached 41 a whopping 41 seasons at 11 high schools, and is still going strong. He’s currently at Calexico in the San Diego Section, and is perhaps best known for building up Fontana’s program in the 70’s and A.B. Miller in Fontana from 2004-2015. Despite having spent much of his career helping develop up-and-coming programs that aren’t fully established as football schools yet upon his arrival, Tyree is well above .500 in his career.

This past January, he was inducted into the Inland Valley Classic Hall of Fame. On his sustained success throughout his career, Tyree said, “I had the best assistant coaches around, that’s why we won.”

One of the winningest coaches in the Pensinsula’s history, Mike Machado has been at Valley Christian since 1998 after three years at Saratoga.

Machado recently won the 49ers PREP’s Charlie Wedemeyer Memorial Coach of the Week for his yearly offseason work with disabled athletes, and accepted his award from 49ers head coach Kyle Shanahan. The catch? Machado coached Shanahan at Saratoga when he was their freshman coach in 1994. Shanahan said Machado was “probably the best coach [he] ever had”.

The Jaguars have haven’t had a losing season since 2013, and are usually a shoe-in for eight or more wins and a strong playoff run. Gilster is the only head coach in Valley Center history, and has a 165-91 record there.

Kunau resigned from his position as head coach after the 2019 season, but he is not retired from coaching. Having recently told the Press Enterprise that he thinks he might coach again, he still qualifies for the active list currently.

After 14 years at Taft, eight at Helix, and now two at Mount Miguel, Troy Starr owns a career record of 230-68-2. Starr was a big part of Helix’s ascension as a football program, going 83-18-1 and making the CIFSDS semifinals all eight years there. That included two section titles.

While Terry Stark is taking a temporary break from coaching to tend to some health issues within his family, he will hold the status as the second active winningest coach in Sacramento when he returns.

Starting in 1991, he spent 11 years as head coach of Mira Loma, three with Natomas, and the last 15 with Inderkum. Before that, he grew up playing football in Sacramento and spent eight years playing semi-pro ball with the Sacramento Cobras. He leaves Inderkum in outstanding shape, holding a Sac-Joaquin Section current record of 14 straight seasons of 10 or more wins.

With 232 wins across four schools in the San Diego Section since 1985, Ron Hamamota is the winningest active coach in the CIFSDS. He spent time at Cathedral Catholic, Rancho Bernardo, and Lincoln, and has now been at Monte Vista since 2012.

Hamamoto largely has not stepped into spoon-fed winning situations in his head coaching career, but has made a whopping 29 playoff appearances in 33 seasons. Monte Vista won only 16 games in their last seven seasons before he stepped in, but won 36 games in Hamamoto’s first six years there, including a section title in 2017.

Kevin Macy has been the head coach of longtime East Bay powerhouse Campolindo since 1996. The Cougars won four straight CIFNCS championships from 2014-2017 and state titles in 2014 and 2016. Macy also was the head coach at Oakland Tech from 1988-1994.

One of the next coaches to crack 250 and a strong candidate to reach 300 in the next five years, Roger Canepa has been the head coach at Central Catholic in Modesto since 2008. In 2015, they pulled off one of the greatest small-school seasons in Sac-Joaquin Section history, going 16-0 with section and state titles.

Bear River wins in the vicinity of 10 games just about every year to this day, putting Terry Logue in great position to enter the 300-wins club within five years or so. He’s been there since 1987 outside of a hiatus in 2002 and 2003. He first got his start as head coach at Paradise in 1981 and 1982. Logue has received numerous awards for his work on the field and in the community, and was given the 2019 Sac-Joaquin Section Model Coach Award.

The Huskies always seem to be two steps ahead, and Logan and Centennial show no signs of slowing down. He’s already the winningest coach in Inland Empire high school history, but in several years, Logan could be making a real push for some all-time California coaching records.

Garrett plans to retire as a P.E. teacher after the 2022-2023 season, putting his football coaching career at Crenshaw in question. But the Cougars are coming off an 8-4 season and are only two seasons removed from a 2017 state championship and 12-3 record.

Either way, Garrett will always have the honor of being a recipient of the Don Shula NFL high school coach of the year following the 2017 title. And he’s the only City Section coach ever to get a team to the CIF Open Division state finals, where they lost to De La Salle 28-14.

2019 was yet another noteworthy job by Benkert. The Pioneers started with back-to-back losses by a combined 33 points, and only lost one game again before nearly shocking Crescenta Valley in a 19-16 loss in the CIFSS Division 10 title game. Included in their underdog run was a thrilling 30-14 second-half comeback victory against heavily favored Orange in the semifinals.

The Pacers have turned in three losing seasons in a row, and their 2019 record of 1-9 is presumably the worst of the Alberghini era. But sometimes that comes with the turf for a team that plays a brutal schedule from start to finish every year. If Grant can resume their usual winning ways in the next couple of years, Alberghini could become only the second active coach with 300 wins and under 100 losses.

Who will be the next coach to hit the 300 mark? There’s a few strong candidates on this list, but the way Middletown has been winning lately, Bill Foltmer seems like the safest bet. The last two seasons, for instance, the Mustangs won a total of 19, and they show no signs of slowing down.

Middletown is a very small town, but everyone in the region knows they take their football quite seriously. Foltmer has been there since 1985 after a five-season stint at Princeton in Colusa County directly beforehand, and may very well find himself in the 300-wins club less than a year from now.

He started at Nevada Union in Grass Valley (California) for seven seasons, spent eight at Clovis West, had stints at Fallbrook, Granbury (Texas), Capistrano Valley, Madera, and has now found his longest tenured home yet at Aptos. He’s been with the Mariners for a decade now, who turned in 11 wins as recently as 2018. They need 10 wins to get him to 300, and that could very possibly happen next season.

Fittingly, the winningest active coach in California high school football is has been putting out a national title contender for longer than anyone else. And Bruce Rollinson has done it all at one program – Mater Dei.

Not only is Rollinson the winningest active coach with two seasons’ worth of breathing room, but he’s done it playing the hardest schedule in the country every year without letup. And he’s one of the only coaches on this list that hasn’t even lost 100 games. Considering he’s only lost 85, Rollinson could likely coach another decade and still be under the 100 mark. By the way, if he were to do that, he’d very likely end up the winningest coach in California history, with 90 wins needed to crack 400 and surpass De La Salle’s Bob Ladoucer.

The Monarchs most recently won back-to-back national championships in 2017 and 2018, making four in Rollinson’s tenure. Outside of De La Salle, other team in the country has won four national titles since Rollinson started in 1989. And most importantly, Mater Dei will be among the biggest threats in the country to do it again on any given year for the foreseeable future.