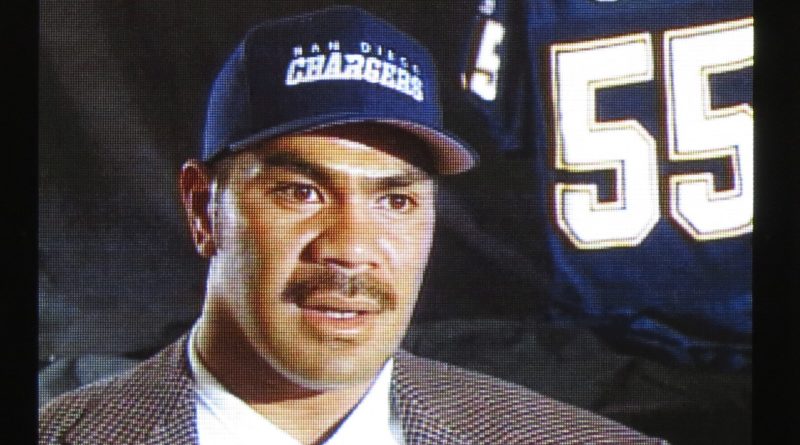 From Marcus Allen to Junior Seau, an impressive collection of football talent has come out of the San Diego Section. With that in mind, Scorebook Live California’s Bodie DeSilva put together his all-time San Diego Section high school football roster.

Smith went 25-1 during his final two seasons at Helix, winning two CIF section championships. Smith headed to Utah, where he started two seasons for the Utes and was named a finalist for the Heisman Trophy in 2004. He was selected first overall by the San Francisco 49ers in the 2005 NFL Draft. Smith has played 13 seasons in the NFL, making three Pro Bowls. He’s currently a member of the Washington Redskins.

After being named the CIF Football Player of the Year in 1977, Allen headed to USC where he won the Heisman Trophy as a senior in 1981. Allen was a first-round pick of the Los Angeles Raiders in 1982 and played 11 seasons for them. He was the NFL MVP in 1985 and was the MVP of Super Bowl XVIII. Allen played five additional seasons for the Kansas City Chiefs before retiring and was elected to the Pro Football Hall of Fame in 2003.

Davis had a big senior season for the Hornets that helped him receive a scholarship to Long Beach State. The school shut down their football program two seasons later, allowing Davis to transfer to Georgia. Davis battled injuries at Georgia and was a sixth-round pick by the Denver Broncos in 1995. Davis played seven seasons in the NFL and was named the NFL MVP in 1998. He won two Super Bowls and was inducted into the Pro Football Hall of Fame in 2017.

Stokes played on a talented Pointers team in high school alongside La’roi Glover. He headed to UCLA where he had a breakout season as a junior, winning Pac-10 Offensive Player of the Year as well as finishing in the top 10 in the Heisman Trophy voting. The San Francisco 49ers selected Stokes with the tenth overall pick in the 1995 NFL Draft. Stokes played nine seasons in the NFL and retired after winning a Super Bowl during the 2003 season. He finished his career with 30 touchdown receptions.

Scott was a football and track star for the Komets before heading to San Diego State where he paired up with Marshall Faulk. Scott put up big numbers for the Aztecs and was a second-round pick of the Cincinnati Bengals in the 1994 NFL Draft. He played eight seasons in the NFL, missing only three games and finished his career with 37 touchdown receptions.

Powell headed to San Jose State after graduating from San Diego HS. He was an eleventh-round pick by the Philadelphia Eagles in 1959 and went on to play 10 seasons professionally, leading the league in receiving touchdowns twice. Powell was named to four Pro Bowls and finished his career with 8,046 receiving yards and 81 touchdowns.

Winslow played his final two high school seasons at Scripps Ranch before heading to Miami. He was an All-American in 2003 and subsequently the sixth overall pick by the Cleveland Browns in 2004. Winslow played nine seasons in the NFL, making one Pro Bowl and finishing with 25 touchdown receptions.

Barnes played football and basketball and was a two-time All-CIF selection in football. Barnes then headed to Washington where he was first team All-Pac 10 in 2004. The Jaguars selected Barnes in the second round of the 2005 NFL Draft. He played 12 seasons in the NFL for three different teams and retired following the 2017 season.

Kennedy headed to Washingon after graduating from Morse and was an All-American for the Huskies in 1992. The Atlanta Falcons selected him with the ninth overall pick in the 1993 NFL Draft. He played 11 seasons for the Falcons and Raiders, making three Pro Bowls, before he retired in 2003. He currently works as a radio analyst for the Las Vegas Raiders.

After leaving Coronado, Huff did a postgrad year at Deerfield Academy before he went to play at North Carolina. The Baltimore Colts selected Huff with the third overall pick in the 1975 NFL Draft. Huff played 11 seasons in the NFL as a right guard.

Riley was a two-sport standout at Castle Park before heading to USC. He dominated on the Trojans offensive line, becoming an All-American as a senior and was selected 25th overall by the Minnesota Vikings in the 1974 NFL Draft. He played 11 seasons in the NFL, including playing in Super Bowl IX and XI.

After playing five sports in high school, Neal headed to Cal State Bakersfield on a wrestling scholarship. He won the NCAA Division 1 National Championship as a junior and senior. Despite having not played football since high school, Neal signed with the New England Patriots as an undrafted free agent. He went on to win three Super Bowls with the Patriots, starting 81 games on the offensive line, before retiring in 2010.

Glover was the CIF Co-defensive Player of the Year during his final season with the Pointers before he headed to San Diego State. Glover was a four-year starter at San Diego State and was selected in the fifth round of the 1996 NFL Draft. Glover went on to play 13 seasons in the NFL, racking up 83.5 sacks and was named to six Pro Bowls. He’s currently an assistant coach for the Los Angeles Chargers.

Gay was a two-way player at Hoover before heading to San Diego City College. He then transferred to USC where he became an All-American in 1977. He was a second-round pick by the Denver Broncos and was soon after traded to the Detroit Lions. Gay played 11 seasons in the NFL, 10 of them for the Lions. He finished with 44.5 sacks in his career.

Salave’a headed to Arizona after Oceanside and was a three-time All-Pac 10 selection. He was a fourth-round pick by the Tennessee Oilers in 1998 and went on to play eight seasons in the NFL before retiring. He’s currently the Associate Head Coach and Co-Defensive Coordinator for the University of Oregon.

Brock played at Oregon after finishing up at University City. He was a third-round pick by the Green Bay Packers in 1989 and played eight seasons in the NFL, registering 19.5 career sacks.

Seau was a multi-sport star at Oceanside before heading to USC. He had 19 sacks during his final season with the Trojans and was named the Pac 10 Defensive Player of the Year. The Chargers selected him with the fifth overall pick. He went on to play 20 seasons in the NFL, making 12 Pro Bowls, six All-Pro teams, and was elected posthumously to the Pro Football Hall of Fame in 2015.

Following his graduation from Chula Vista, Edwards headed to UCLA where he was named an All-American and also played baseball during his junior season. He was selected in the fourth round by the Kansas City Chiefs in 1996 and later played five seasons for the San Diego Chargers. Edwards retired after the 2008 season and remains in a select group of NFL Linebackers that finished their careers with over 20 sacks and 20 interceptions.

Johnson headed to Colorado after he graduated from Carlsbad and played alongside La Jolla Country Day graduate and 1994 Heisman Trophy winner Rashaan Salaam. The New England Patriots selected Johnson in the second round of the 1995 NFL Draft, where he played for all ten seasons during his career. Johnson won three Super Bowls with the Patriots and retired after the 2004 season.

Tinoisamoa was a star at Vista, being named All-State three times and was an All-American running back during his senior season. He headed to Hawaii where he was a first team All-WAC selection. The St. Louis Rams selected Tinoisamoa with the second-round pick in the 2003 NFL Draft. He played six seasons for the Rams and two for the Bears and retired after the 2010 season.

Hall headed to Michigan after finishing at Vista and was a consensus All-American in 2006. The Cincinnati Bengals selected him in the first round of the NFL Draft, where he would play for the next nine seasons. Hall retired after the 2018 season with 544 career tackles and 27 interceptions.

Lynch was a standout in baseball and football at Torrey Pines before heading to Stanford. He played both sports for the Cardinal, initially playing quarterback on the football field. Lynch played two seasons of minor league baseball in the Florida Marlins organization before he was drafted by the Tampa Bay Buccaneers in 1993. Lynch played 11 seasons for the Bucs and finished his career with career with the Broncos in 2007. He won a Super Bowl in 2003 and made nine Pro Bowls. Lynch is currently the general manager for the San Francisco 49ers.

Allen headed to Arizona State after leaving Point Loma and was named first team All-Pac 10 during his senior season when he intercepted eight passes. He was a second-round pick by the Philadelphia Eagles in the 1988 NFL Draft and went on to play 14 seasons in the NFL, making six Pro Bowls and three All-Pro teams. He finished his career with 54 interceptions and nine defensive touchdowns.

Buchanon headed to Mira Costa College after finishing at Oceanside and then on to San Diego State where he was named an All-American. The Packers selected Buchanon seventh overall in the 1972 NFL Draft. He was named the NFL Defensive Rookie of the Year in his first season and went on to play eleven seasons with the Packers and Chargers, finishing with 28 career interceptions.

Cardona played lacrosse and football at Granite Hills before heading to the Naval Academy. He was a four-year starter at Long Snapper for the Midshipmen and was then selected by the New England Patriots in the fifth round of the 2015 NFL Draft. Cardona has not missed a game for the Patriots during his five seasons and has won two Super Bowls.

Dempsey was born without any toes on his right foot and without any fingers on his right hand. He attended San Dieguito Academy and Palomar College before signing with the New Orleans Saints as a free agent. Dempsey played 11 seasons in the NFL, making a Pro Bowl in 1969 and most notably kicking a 63-yard field goal, which stood as an NFL record for 43 seasons.

After leaving Hilltop, Wagner headed to Cal Lutheran before transferring to Cal State Northridge. He signed with the Dallas Cowboys as an undrafted free agent in 1985. He went on to punt for six teams during his nine-year career in the NFL.

Agnew played all over the field during his time with the Pointers before heading to USD. He tallied nine career interceptions for the Toreros and was selected by the Detroit Lions in the fifth round of the 2017 NFL Draft. He had a breakout rookie season as a punt returner and was named an All-Pro. Agnew has played in 32 games during his three seasons in the NFL.