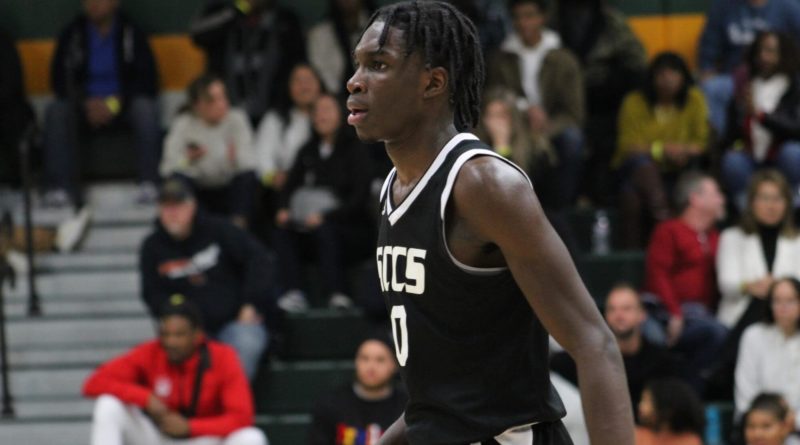 Next up in our series of scouting reports is Ty Harper, one of Southern California’s best – and most exciting – guard prospects. Harper meets the eligibility criteria for both the class of 2020 and the class of 2021, so he has a choice to make for next season.

Harper came into his first year at Santa Clarita Christian somewhat under-the-radar, with only one Division I offer coming from Detroit Mercy. Now he’s widely ranked as a high-3-star prospect, and Rivals has him as the 39th best shooting guard in his class. Harper picked up offers from Virginia Tech, USC, Oregon, Arizona, Cal, Arizona State, and Pepperdine after the 2019-2020 season began, but he’s still underrated.

Harper propelled SCCS to a 24-6 record last season and a dominant Southern Section 2-AA title run. The Cardinals beat the likes of Rancho Christian, Heritage Christian and Chaminade (twice), and finished well inside national top-50 rankings. Harper was named the CIFSS 2-AA Player of the Year and made Scorebook Live’s Second Team All-SoCal.

With freak athleticism, explosive shooting ability from deep, playmaking skills that continue to develop and game-changing perimeter defense, he’s a prototypical combo guard with the tools to go very far.

While his range wasn’t his strongest suit early in his basketball career, Harper is a great three-point shooter with the ability to take over a game from downtown. He’s often hitting from 25 feet off the dribble, without many off-nights from the perimeter last season.

He doesn’t spot up a ton because he so often has the ball in his hands, but he’s just as dangerous spotting up as he is shooting off the dribble.

Harper is one of the most athletic players I’ve ever seen at the high school level. Matched up against projected future NBA players this past season, he was usually the most explosive (and often the outright best). At 6-foot-4 in shoes, he can throw down with his head at the rim. His vertical leap has been rumored to be 42 inches, and with the dunks he throws down – including an in-game Eastbay – that’s about what it has to be.

There aren’t many bigs who can challenge him when he has a head of steam, which he’s proven repeatedly against seven-foot rim protectors. And Harper is a skilled finisher in addition to having bounce. He avoids low-percentage layups in traffic, but routinely finishes through the trees with double-clutches, english, Euro-steps, and tough spin moves to his off-hand.

He’s also easily an NBA-caliber athlete in terms of foot speed, acceleration, and lateral agility. And he has the conditioning to play full quarters or halves without leaving the court while maintaining a high motor.

With his quickness, he’s nearly uncontainable creating off the dribble or from triple-threat as defenders are forced to respect his jumper. His jumper enhances his driving game in turn.

Offensively, Harper stays under control but is always in attack mode. And he applies his energetic play style to the less glamorous end as well.

He was listed at 6-foot-3 and 170 pounds before last season, but Rivals recently listed him at 6-4, 185, which is a significant boost for a combo guard from a pro lens.

Having the ability to match up against any backcourt position and put on the clamps, Harper was the best one-on-one defender I saw last season at the guard spot, period. He often picks up full court and forces his man to expend energy.

Not only is he a committed menace, but he has good instincts and takes stopping the foe’s best perimeter threat to heart. Harper of course has the physical tools to stay in front of guys and contest shots. But he consistently guards smartly and reads guys well. And when someone does get a rare step on Harper, he funnels them right into the help, showing his ability to guard within a scheme.

At higher levels, it becomes much easier for offenses to get their playmakers out of islands with elite defenders. That means the value of his individual defense may drop a little compared to defending within a team concept – particularly in pro ball. Still, his defense is an overlooked asset that doesn’t show up in stats or highlights but should’ve jolted his stock up even higher than it is.

POSITION AND FIT IN MODERN GAME

Harper has been listed in various places as a combo guard, point guard, shooting guard, and wing. A true combo guard, he played both PG and SG every game for the Cardinals.

With his adeptness at creating with the ball in his hands and running an offense, some basketball theorists would say that he automatically should be considered as a point guard. Especially given his knack for creating and dropping impressive no-look dimes.

But in both college and NBA basketball today, the preferred meta is to play two lead guards at once as much as possible. Pushing 6-4 with a wingspan that appears to be around 6-7, it would be optimal to play through Harper as a lead guard who technically spends more time at the two. For an NBA reference point, think in the vein of longtime combos who ended up as full-time SGs such as Jrue Holiday, Zach Lavine, CJ McCollum, and most recently, Shai Gilgeous-Alexander.

Additionally, Harper and his team are at their best when he’s looking first to score, despite his willingness to pass. And he’s best coming out of triple-threat. Also, playing alongside a facilitator who helps get Harper spot-up looks from three would substantially raise his stock at higher levels – even if he always has the usage rate and assist rate of a point guard.

At the size of a tweener guard, growing just one more inch would mean a new ballgame. Harper could probably also add 10 pounds of muscle without losing athleticism. One or both of those would reduce positional “tweener” concerns from a pro lens and substantially raise his stock further. But if not, he’ll be fine with continued development.

At any position, he’s a great fit in the modern game on offense because he’s a natural “three or key” guy. And while his ability to create for others is still developing, he’s happy to generate shots for his teammates or just move the ball if he doesn’t have an efficient look. Continuing to improve his already strong ball-handling and distributing skills will be key to reaching his potential no matter how he’s used.

Harper has the imminent potential to be one of the better D-1 players in the country by the end of his college career, and at minimum projects to have a successful career in a strong pro league somewhere.

He’s competitive, highly clutch, and steps his game up against his top peers in the country. Throw in major late development, and Harper has the keys to longterm success for a slightly late bloomer.

Because he’s still blossoming at a fast rate and physically growing late in his high school career, it’s too early to peg down exactly when he’ll reach that star level in college and whether or not he could make the NBA. But with his tools and continual improvement, there’s nothing I would rule out for him.