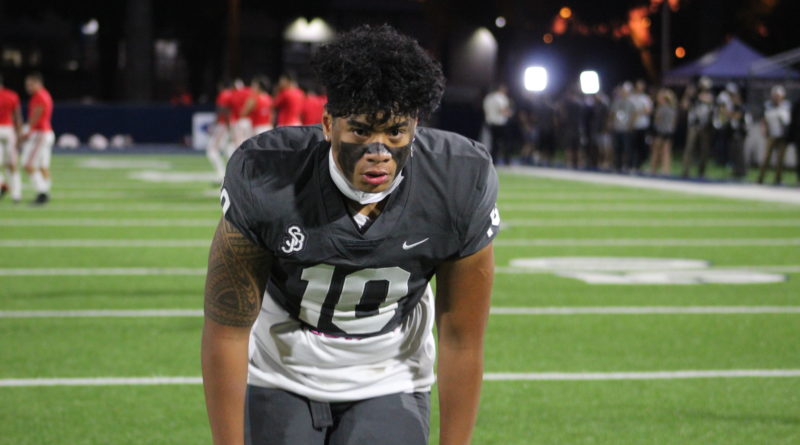 With the 2019-2020 school year coming to an end, it’s officially time in the high school football recruiting world to zero in on the class of 2021. With the No. 5 ranked class in the country per 247Sports — a class that is primarily comprised of SoCal high school football stars — USC Trojans football fans have a lot to be excited about.

After over a decade of top-20-ranked recruiting classes, USC football’s 2020 recruiting class fell out of the top 50 in ranking. That came on the heels of a sub-.500 season in 2018 and a ho-hum 8-5 2019 that ended with getting blown out in the Holiday Bowl.

It came to a head last fall when Gatorade’s California Player of the Year Bryce Young, a 5-star QB from longtime USC feeder Mater Dei (Santa Ana), switched his commitment to Alabama. While there is a host of talent within their dozen 3-star prospects, USC finished with zero 5-star prospects and only two 4-star prospects, which on paper represents a monumental failure.

However, the tides have turned: USC’s 2021 recruiting class is already ranked in the top five in the country. Of the 11 commits, two committed in 2018, QB Jake Garcia committed last fall after Young de-committed, and a whopping eight committed in the spring of 2020. Many of the commits are projected NFL draftees. Nine of the commits are 4-star prospects, and the only two 3-star prospects are ranked among the very top prospects at their positions in California.

Here’s how the class breaks down:

Garcia was ranked as a 5-star prospect in 247Sports’ composite rankings up until recently, and he very recently fell just barely back down into the 4-star category. Either way, he’s widely regarded as one of the top quarterbacks in the country, and largely considered top-five in his class.

With Kedon Slovis around till 2023 and J.T. Daniels still in the fold, it’s unlikely that Garcia will be a factor at USC as an underclassman. However, he’s polished enough to be able to play from day one.

Garcia has a great arm and an effortless stroke, plus steady decision-making and strong overall consistency. His athleticism isn’t overly impressive, but he’s a good physical specimen at 6-3, 190, with solid mobility. In only nine games last season, Garcia threw for over 2,300 yards on over 70% completion, including 25 touchdowns.

Garcia has plenty of downfield ability, and doesn’t hesitate to launch into coverage when his guy has an advantage. However, his feel for patiently guiding touchdown drives with safe darts from under 20 yards going both to the middle or the sidelines pops out just as much. His aversion to trying to do too much and willingness to make the simple play bodes well for higher levels where he will continue to be surrounded by playmakers.

Garcia likely won’t get opportunities in his first two years at USC, but projects to be ready to go as soon as it’s his time to shine. He has a chance to be USC’s next great QB.

His production is very good, not elite – there’s another player on his own team the same year with more carries and rushing yards – but scouts really like his upside. With juke-out shiftiness, breakaway speed, a build that’s ahead of schedule, and very good catching ability in limited opportunities, he has all the tools needed to excel in college ball.

Another 4-star Texas product, Davis is a strong, physical receiver. He’s 6-0 and a little under 200 pounds, already with plenty of strength to contest for catches in the air against D-1 defenders. Skyline plays a wide range of competition throughout the course of the year, but Davis will come into USC having played against numerous teams filled with college talent.

A big part of one of the better O-lines in the country, Murphy will enter USC straight from the Trinity League. He’s upwards of 6-5 and 290 pounds, and while he’s “only” a 3-star prospect, he’s his class’s top-ranked OT in California. JSerra has shined in the running game the past couple of seasons, and their offensive linemen tend to be strong run-blockers who are in great shape. Murphy will have as much experience against the best front sevens in the country as anyone out there.

As his name would suggest, Gibbs might be the biggest guy I’ve seen on a high school football field, and that’s saying something. (USC fans loved Zach Banner, so Gibbs might be a fan favorite from early on.) The 3-star prospect looks every bit of 6-6, 360, and also comes from the Trinity League.

Last season he was a part of one of the best offensive lines in the country for national champion St. John Bosco, who plays arguably the hardest schedule in the country, so he will be battle-ready.

The 4-star two-way lineman has been committed to USC since June 12, 2018, when he had just wrapped up his freshman year of high school.

Toia’s versatility for 6-2, 315 is special. He’s spent ample time in high school playing starters’ minutes on both lines, and could very well play guard in college. Toia is most likely to play DL in college, where he is primarily an option at DT/NG but also capable of playing DE–very few players of his size have the agility needed to thrive as an edge-rusher who can also be relied upon to keep up with strong-side playmakers. Because Toia is part of one of the most stacked (and physically largest) lineman corps in SoCal, he played DE more often than not in 2019 and led the team with 9.5 sacks (tied) and a jaw-dropping 65 QB-hurries.

All that said, Toia is expected to play DT exclusively going forward, but that’s the unique versatility he will bring to that position. Grace Brethren won a state title in 2018 and made the Southern Section Division 3 finals in 2019, making him very experienced and accomplished against future D-1 competition.

Gaoteote is the other C/O 2021 commit who’s been committed since 2018. He’s been committed since February of 2018, when he was still a freshman, and even before a number of C/O 2018 players committed. His 61 tackles and eight tackles for loss in 12 games last season don’t wow you, but keep in mind who he plays with, and against. Without a doubt, Gaoteote was one of the most consistent defensive players for the national champion.

The high-4-star prospect can play either linebacker spot, most likely OLB in college with his quickness, but he also has the size (6-2, 220) and hitting ability to play ILB at higher levels as well. Gaoteote’s best attribute is probably his raw tackling ability–he very rarely misses a tackle or allows players to pick up yardage after contact, and he’s an absolute punisher.

Simon is the most recent of all USC’s commits, having announced his commitment on Mother’s Day. Simon is a standout on both sides of the ball for Lincoln, but he will likely start on defense for the Trojans. Simon said new defensive coordinator Todd Orlando envisions him as a rover/outside linebacker in the team’s new 3-4 scheme who can be a hammer against the run.

At 6-2 and over 220 pounds, he has the size to play a wide variety of roles on both sides of the field. On offense, he’s a star WR with over 1,000 receiving yards last season. He also had seven rushing touchdowns in under 40 carries as one of six RB2s on a team with only one option as an RB1. Simon was also Lincoln’s primary returner on special teams.

Defensively, he played more DB than LB with six interceptions and eight passes defensed. Simon has the size, tenacity, and agility to play either linebacker spot. How they use him, and the potential to see the high-4-star recruit used in multiple roles, will be fascinating to watch.

As far as local products go, Bullock is the most recent commit, announcing his decision on April 18. The 4-star ATH prospect could very well play receiver at the Division 1 level (he led Muir with 914 receiving yards last season), returner on special teams, and both safety and cornerback. But corner is the most likely bet going forward, in addition to possibly getting chances to return punts.

At 6-2, 175, Bullock has filling out to do but has the length and athleticism one wants to see at CB or FS. His work on both sides of the field has shown that he’s good in the air and obviously has the hands to pick balls out of the air. As a senior he was tied for the most interceptions on the Mustangs with six.

Beavers committed to Oregon late in his sophomore year (April 2019), but flipped his commitment after USC hired Donte Williams, the DBs coach and recruiting guru who recruited him. He’s listed as an ATH and has been considered a potential OLB prospect, but will be playing safety at USC, presumably strong safety. The 6-1, 195-pound 4-star prospect is an outstanding hitter who can close gaps quickly and end plays.

Gordon is a very athletic 4-star prospect who can play either safety position. At 6-2, 190, he’d probably need to add a bit more bulk to play strong safety at the college level, but he’s a strong, hard hitter with great closing speed.