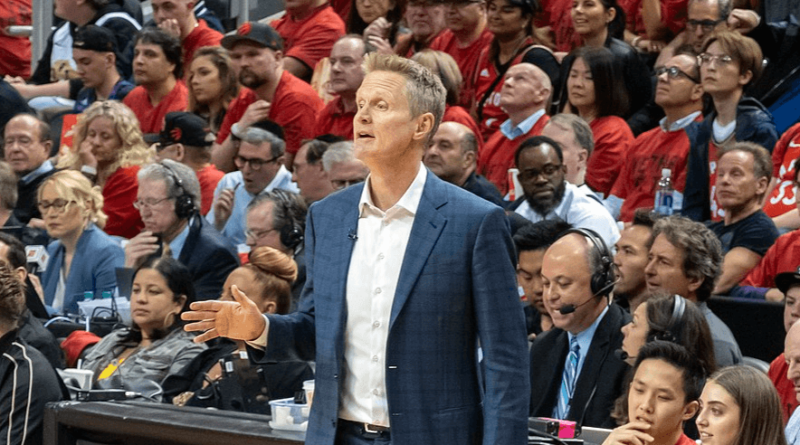 Kerr, who won five NBA titles as a player and has three rings as the head coach of the Golden State Warriors, graduated from Palisades in 1983 before embarking on a five-year career at the University of Arizona and a 15-year playing career in the NBA.

Here are highlights from Dickau’s conversation with Kerr. The full podcast will be released soon.

“I had a great high school coach named Jerry Marvin, a legendary high school coach in the Los Angeles area. He passed away a few years ago. He was a John Wooden disciple. I was really lucky to get a great basketball education in high school and even before that.

When I was growing up, it was before the specialization age where you played one sport all year round and you went from one sport to the next. We had a really advanced junior high basketball league, the instruction was really good. We were taught by high school players at Palisades High, so the junior high players would learn from the high school guys and then go on to play in high school and coach the junior high kids. It was a really nice and organic way of learning the game where you’re learning and then teaching it a couple of years later with younger kids. I had a fantastic basketball experience growing up and it really helped me prepare for my career.”

On his recruiting visit to Gonzaga and guarding John Stockton:

“Gonzaga sent me a letter and made a couple of calls and they told me that they wanted me to come on a visit … I was excited; it was my first visit anywhere … I go up and see the campus, see the coaches, see the locker room, all that stuff and they say our guys are going to play pick up. I said ‘perfect’ and I put my shoes on and joined the pick up game.

I’m being guarded by a guy named John Stockton.

He had just finished his senior season and was getting ready for the draft. I’m a senior in high school … John proceeded to wipe the floor with me. He stole the ball from me and scored the ball on me at will. It was total embarrassment. Then the coaches basically took me into the office and said we’re going to go in a different direction. I always blame John Stockton for ruining my future at Gonzaga (*chuckles*).”

On the ESPN documentary ‘The Last Dance’:

“It was really kind of bizarre for a championship team to be broken up before it had a chance to defend a title. It would be unheard of today and it would cause mass hysteria in sports media. We were living in a different time. There was a lot of media, but it was a different type of media. You didn’t have the constant judgement and criticism that social media provides.

Back then it was compartmentalized. You had the newspaper, you had talk radio and you had SportsCenter and that was it. Even though it was a huge story, you could get removed from it.

But it was just weird, here we were this team that had just won two championships in a row, we’ve got the greatest player of all time in Michael Jordan, one of the great coaches of all time in Phil Jackson and before the season even started we were all told that was it, this team is going to be broken up. That became a galvanizing force and Phil Jackson used it as one and he named it ‘The Last Dance’ before the season even started and we used that as motivation to ultimately get it done and win another championship.”

“To be frank, I’m not sure I’m the right guy to answer [about social media]. My kids sort of laugh at me. I’m on social media. I’m on Twitter and I enjoy some aspects of it, but I do see the damage that can come with the criticism and the judgement.

We’re all human and so there is this phenomenon in this country where everyone is sort of lashing out at each other behind the safety of their keyboard or phone and it’s very unhealthy. People say stuff on social media that they would never say face to face and so I think you have to be really, really careful with this stuff.

What I try to do is use my voice on Twitter to either push for a social cause I believe in or just share an article that I enjoyed reading. But I try not to get too involved because I can just see how negative it can be as well. As a 54-year-old who didn’t grow up with this stuff, my kids sort of laugh at me with the social media stuff so what do I know?