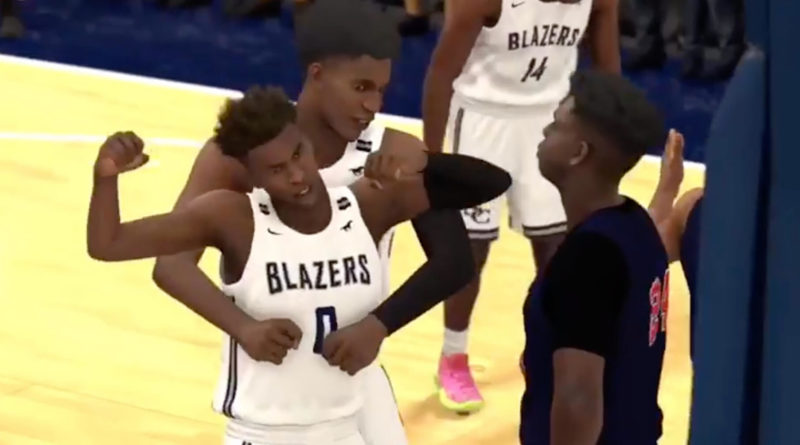 Like many high school students, Jacob Calderon is adjusting to a change in lifestyle stemming from COVID-19-related shutdowns. Calderon is finishing out his freshman year at Dougherty Valley High School in San Ramon, California online under a governor-mandated stay at home order.

Calderon is known online as his gamertag “xolozen” by a growing number of high school basketball prospects and gamers. What started as creating his favorite prospect to play on his own on a whim, has snowballed into Calderon spending hours on end curating top-tier high school rosters from scratch and making them free to anyone who owns the game on an Xbox.

You can play as BJ Boston and Bronny James with Sierra Canyon, Jalen Suggs and Chet Holmgren with Minnehaha and Paolo Banchero and John Christofilis with O’Dea, among many more — jerseys, attributes and all.

At first, he just created class of 2020 four-star center Kai Sotto for his own gameplay. He saw the 7-foot-1 left-handed center in highlight videos online, and liked his game. Plus, he shares filipino heritage with Calderon — a big reason for his fandom.

He posted about the character on social media and tagged Sotto, which Calderon said got his attention.

“I was like dang, better keep the ball rolling,” Calderon said. “I was just planning on stopping there. Those were the only teams I wanted to play with, but I kept on getting recommendations, like ‘yo, you should make Roselle Catholic,’ and other top schools like that, so I just kept on creating and creating.”

Calderon didn’t even pay attention to high school basketball until he started getting enough feedback to justify making more rosters.

To create a team, he first finds an active roster online, creates each player with their full name, likeness and measurables and pours over any highlight he can find to design attributes. This process takes around three hours per team, he says, and that doesn’t include recording and cutting up a highlight video dubbed to music that he makes using gameplay from his teams, which he posts to Instagram with a download code.

Social media quickly grew his subscriber base. Calderon went from in the 100s to well over 1,000 downloads in two weeks.

Downloading the teams is a multi-step process that is detailed in a link in “xolozen’s” Instagram profile. Many reach out with suggestions for his next team.

When Calderon posted the highlight video, several O’Dea players re-shared it on Instagram.

Banchero, who is among the nation’s top recruits in the class of 2021, said it wasn’t the first time he’d seen someone create him as a player on NBA 2K, but it was the first he’d seen himself in an O’Dea jersey with an entire highlight reel.

He thought it was cool.

Junior guard Jaylon Ellis downloaded and played as his team, though most of the O’Dea basketball players who saw or shared the highlight clip didn’t download it. Dezjay Perkins, a junior guard, didn’t play it because he doesn’t have an Xbox.

Junior forward Max DeBiec, a University of Washington baseball commit, said he saw the video and is pretty sure most of his team did, too. But he didn’t download and play as himself, nor did Christofilis. Banchero and Christofilis, both Division I prospects, have ample highlights on the internet, but many players don’t. That’s when Calderon plays a guessing game.

“Depends on how high they’re ranked,” he said. “With Montverde, they’re the No. 1 school in the country, so I take mad time focusing on everyone down to the last player on the bench.”

Calderon, a die-hard Golden State Warriors fan, hopes to be an NBA photographer one day. Getting recognized by high-level prep stars who could soon be among the league ranks gives him motivation.

So far, Calderon has heard that IMG Academy standouts Brandon Huntley-Hatfield and Jarace Walker, both five-star sophomores, have downloaded his roster and played as themselves.

Andy Buhler is a reporter for Scorebook Live Washington. Hear him weekly on the Scorebook Live Today podcast, follow him on Twitter @AndyBuhler; email at andy@wpsblivest.wpengine.com.