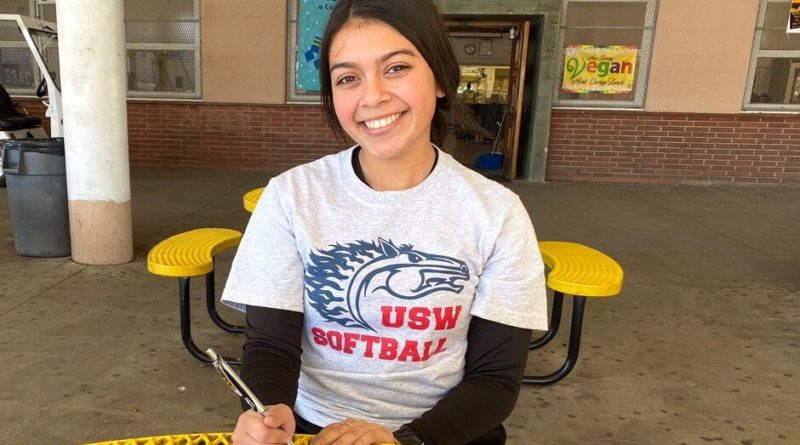 While the 2020 California high school softball season was canceled before the regular season was at the halfway point, a number of L.A. City Section pitchers were off to excellent starts. And they deserve to be recognized.

Factoring in 2019 and 2020 statistics and strength of schedule, these were the 15 best pitchers in City Section softball in 2020. The list reflects only what they accomplished on the mound.

To submit a photo or nominate a player who isn’t the list, email lance@wpsblivest.wpengine.com. Players who were injured or ineligible for the start of the season can be nominated. Check at the end of the post for updates.

A reigning First Team All-City selection, Angulo had a 1.33 ERA with 45 strikeouts in 42 innings in 2019. She finished with a 7-1 record, four complete games, and a save.

Twelve innings of work in 2020 is not much, but we made an exception for a player with zero earned runs allowed on a 7-0 team. Playing mostly a closer role plus two starts, Barrios was 2-0 with two saves in five appearances. In addition to a 0.00 ERA, she had 14 strikeouts and was allowing a batting average of just .159.

In 18 innings in 2020, DeSmet was dominant for arguably the best team in the section in 2020. She was 2-1 in six appearances with a 1.56 ERA, and three of her four earned runs allowed came in her first game of the year against an elite Saugus squad. Even more eye-popping is that hitters were only batting .136 against her in 2020 with an OBP of .174.

Banning’s 3-5 record in 2020 isn’t impressive, but the Pilots came out of the gate challenging themselves with a host of formidable Southern Section foes. So, while DeVoe was 3-5 with decisions in each of their games, her 2.47 ERA in 51 innings is outstanding factoring in the Pilots’ challenging schedule. Coming into City Section play, Banning would’ve had a great chance to compete as a dark horse title contender, and DeVoe’s strong numbers would’ve likely improved even further. She’s committed to Central Florida.

Duran was fantastic for 6-2 South Gate in her shortened senior year. She went 6-1 with five complete games in seven starts and had an ERA of 1.94 in 36 innings.

Flores only threw 18 innings before her senior year was cut short, but she was lights-out in all five games she pitched in. Eagle Rock (7-1) was 5-0 in her appearances, and after allowing two earned runs in her first game, a victory over strong South Pasadena, she never allowed an earned run again. In total, Flores finished with an ERA of just 0.78, 32 strikeouts, and an opposing batting average of .172.

Before factoring in a lower strength of schedule, Flores had the most statistically dominant 2020 of any pitcher in the City Section.

Her numbers are staggering across the board. Flores started all 10 of Discovery’s games, in which they were 9-1. She went 8-1 with a 0.61 ERA, with three of those games being the backends of double-headers. In her only loss, the runs were unearned, and she threw six total complete games. Flores racked up 106 strikeouts in 46 innings and only allowed opposing batters to hit .031 and get on base with a rate of .078.

Flores was one member of San Fernando’s dominant four-headed pitching staff in 2019. In 40 innings, she went 4-1 with a 1.75 ERA, including a no-hitter.

Carson was a top-three team in the City Section in eight games in 2020, and Gonzalez might have been the section’s most dominant pitcher. In a very solid sample size of 37 innings and appearances in every game, she had an ERA of 1.14, registered 48 strikeouts, and was 4-0 with a save.

Justman is one of a few players on this list with a solid argument as the best pitcher in the City Section – starting with her 2019 City Section pitcher of the year award. Chatsworth had the hardest 2020 schedule in the section through 11 games, facing a slew of Southern Section heavyweights and finishing 5-6. But given the strength of schedule they were a clear title contender in the CIFLACS.

The Wisconsin commit pitched in every game and was 5-3 with 58.2 innings under her belt. To own a 1.91 ERA in that many innings with that difficult a schedule is phenomenal. She also racked up 83 strikeouts against 257 batters faced.

ECR was off to perhaps the best start (7-2 with a very strong schedule) in the City Section before the 2020 season was canceled. And that was with Kelly on the mound for the bulk of their innings. She was 4-1 in eight appearances with a 3.40 ERA, and 43 strikeouts in 35 innings.

Tirado is an outlier on this list in that she only threw 13 innings before the season was canceled, but she was fantastic in those three games. She had a 1.08 ERA with her only two earned runs allowed coming against dominant Westlake. Tirado’s opposing .128 batting average and .146 on-base percentage were premier marks, and she averaged over one strikeout per inning. And she’s only a freshman. She threw a one-hitter in her high school debut, and has a great chance to be one of the top softball pitchers in the state before the end of her career.

These are standouts we missed in our initial post.

Velasquez is working her way back from injury issues after three dominant years for San Pedro. She made all-section teams in all three years before the shortened 2020 season and is headed to Bethune-Cookman University to play softball next year.

Islas was the Division I Pitcher of the Year in 2019. She belonged in the initial post.

Gallegos went 5-0 with a 0.64 ERA in 2019 en-route to a Division II title, She made the all-division team and was named the Imperial League Pitcher of the Year.