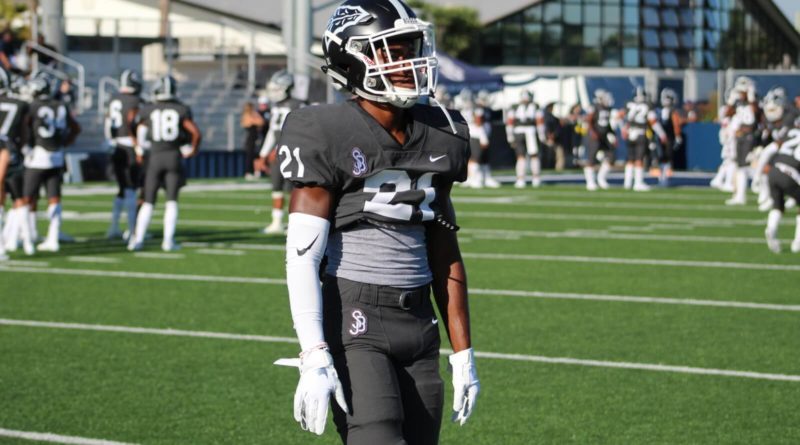 The elite ranks of high school football draw some of the best athletes in the country, and many Southern California football stars apply their speed to the track during the spring.

These 25 athletes from the L.A. City, Southern and San Diego Sections all recorded top 100 times in the state in 2019 or 2020 in either the 100-meter or 200-meter, and were also football stars at running back, wide receiver or defensive back. Many are among the top football prospects in the country.

A 4-star Cal commit, Anderson was second in receptions, receiving yards, receiving yards per game, and receiving TDs on one of the best teams on the West Coast. He also finished in the top 100 in California this year in 100-meter season bests with a time of 11.02.

In only nine games, Banks totaled over 1,000 yards of offense and 12 rushing touchdowns for the Southern Section Division 12 semifinalist with an average of over 100 rushing yards per game. His season best of 10.99 seconds in the 100-meter dash was tied for 75th in California.

In 2019, Bates was a nightly contributor at running back on the national champion Braves. The 3-star prospect already has five offers as an underclassman. And his 200-meter time of 22.85 seconds was in the top 100 personal bests so far in California before track season was canceled.

Bolden totaled over 1,500 all-purpose yards and 17 touchdowns for the Southern Section Division 2 semifinalist in 2019. The 3-star prospect will next play football at Oregon State.

In addition to his prowess on the football field, Bolden’s season-best of 22.76 seconds on the 200-meter dash was tied for 60th in California in 2020.

Widely considered the top running back in the Class of 2022, Brown amassed 2,684 rushing yards and 1,408 receiving yards in his first two years of high school.

Not only does Brown have 26 offers as an underclassman for football, but he was also top-30 in the country last year with a 100-meter time of 10.82 seconds.

In 2019, Costelli threw for 1,992 yards and 23 touchdowns to only five interceptions in 12 games for the CIF Southern Section Open Division finalist. Before committing to Utah in early April, the 4-star recruit had received at least 19 total offers.

Costelli also was tied for 28th in California last year with a 100-meter dash time of 10.82 seconds. His excellent agility shines into his football game, as he also ran for 354 yards and four touchdowns last season.

Davidson was tied for 33rd in California in 2019, his freshman year, with a 100-meter time of 10.84 seconds. He’s also a college prospect as an ATH on the football field, putting in some good work at DB and WR in both underclassman seasons and excelling in special teams with 341 kick-return yards in 2019.

In his senior year, Evans-Bey was a crucial running presence to complete one of the better passing games in the country for the 12-1 Centurions. He ran for 839 yards and nine touchdowns in only 100 carries for the CIFSS Division 5 semifinalist. In track, his season-best of 22.78 seconds in the 200-meter was 64th in the state in 2020.

One of the most versatile playmaking threats in SoCal, Johnson was a force at running back, slotback, and even wideout at times for the state champion Tritons. The Sacramento State commit totaled 812 rushing yards, 653 receiving yards, and 16 total touchdowns in 2019, plus 242 punt-return yards. And his 11.05-second mark in the 100-meter dash put him in the top 100 in California for non-seniors in 2019.

Knecht was top-20 so far in 2020 with a 200-meter time of 22.36 seconds. He also cleared 600 receiving yards as a key cog last fall in the Dons’ run to the Southern Section Division 8 football title game.

Before graduating early and heading to Utah for the spring semester, Lawler was a 3-star ATH at Roosevelt with double-digit college offers. As a junior in 2019, his 100-meter time of 10.94 seconds was 64th in California among non-seniors.

On the football field, Lippert is a star running back for LCC, and he has already been offered at the D-I level.

Since day one of high school, Rayshon “Speedy” Luke is about as fast as it gets on both the football field and the track. He’s a 4-star running back prospect with 10 offers already and was the leading running threat on national champion St. John Bosco with 700 rushing yards and nine rushing touchdowns.

And as just a freshman in 2019’s track season, he was tied for second in the state among non-seniors with a 100-meter time of 10.55 seconds.

McMillan had over 1,000 all-purpose yards in 2019 for the CIFSS Division 3 quarterfinalist, and signed with New Mexico State over five other schools to play WR. His 100-meter time of 10.77 seconds was tied for 20th in the state among non-seniors a year ago.

With five interceptions and seven passes defenses at CB plus 607 yards and eight touchdowns of total offense as a RB/KR, Moten was one of the top all-purpose players in the Inland Empire in 2019. The 3-star prospect holds multiple offers at cornerback, including BYU.

The 3-star cornerback is committed to Rice for football, and was 11th in his class in California last year with a 100-meter time of 10.74 seconds.

A 3-star San Diego State commit, Savage helped lead Western to a CIFSS Division 11 title in 2018 with over 1,000 receiving yards. He also totaled 790 receiving yards and 14 receiving touchdowns as a senior. Savage also had a top-50 returning 100-meter time of 10.89 seconds coming into the 2020 track season.

A 4-star ATH with double-digit offers already, Tucker is an elite slot receiver and cornerback in his class. He was also top-five in his class in the 100-meter in 2019.

A 3-star ATH and UNLV signee who previously played quarterback, Williams had one of the most productive five-game stints at St. Monica last fall that you’ll ever see: 763 receiving yards, nine receiving touchdowns, 445 returning yards, and five picks. He also ran the 100-meter in under 11.05 seconds.

A 3-star standout at Narbonne, Williams forewent his final semester of high school to get an early start at Arizona State. He was in the top 30 in his class within California in the 100-meter dash as a junior.

One of the top-ranked CBs in the Class of 2021, Wright already has a jaw-dropping 34 offers before entering his senior year of high school. The 4-star prospect helped lead Loyola to the CIFSS Division 4 title game last season with a dominant year at corner and also big contributions as a returner on special teams.

In track, Wright’s season-best 200-meter time of 22.29 seconds was 13th in California before the 2020 season was cut short, and his 100-meter time of 10.84 seconds was tied for 33rd. He also happens to be starring as Bronny James in the upcoming Space Jam 2 movie.

With a 200-meter time of 22.08 seconds, Wright was eighth in California in the 2020 season. On the football field, he registered over 900 yards of total offense as a junior.