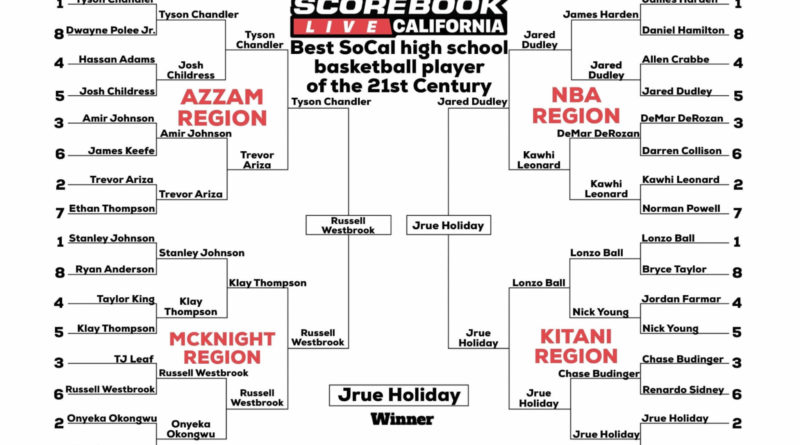 Who is the best high school boys basketball player in Southern California over the past 20 years? Over the last two weeks we gave you a chance to decide.

And you picked Jrue Holiday.

The bracket consisted of players who played their high school ball at some point between 2000 and 2020 in the L.A. City Section, Southern Section or San Diego Section (players who have yet to graduate were not included in our list). Players were selected based on what they did when they were walking the halls of their high schools only, not what they went on to accomplish in college and the NBA.

Ultimately we feel we created an outstanding 32-player bracket. And you determined who advanced through the bracket, round by round. Voting took place on Scorebook Live, Twitter and Instagram from April 14-26.

Players were placed into regions which were named after legendary Southern California high school boys basketball coaches: Gary McKnight, Ed Azzam, and Harvey Kitani. The fourth region included eight players who went on to play in the NBA and was titled NBA Region.

McKnight has won over 1,100 games, 36 league titles, 23 CIF championships, and 11 state championships in his time at Mater Dei. Azzam has won over 900 games and 15 City titles in his Westchester career. Kitani won three City Section Division I championships at Fairfax to go along with two state titles. He won a third state title at Rolling Hills Prep in 2017. All three coaches have sent multiple players to college and the pros.

And here are complete round-by-round results:

You can view the full bracket below: