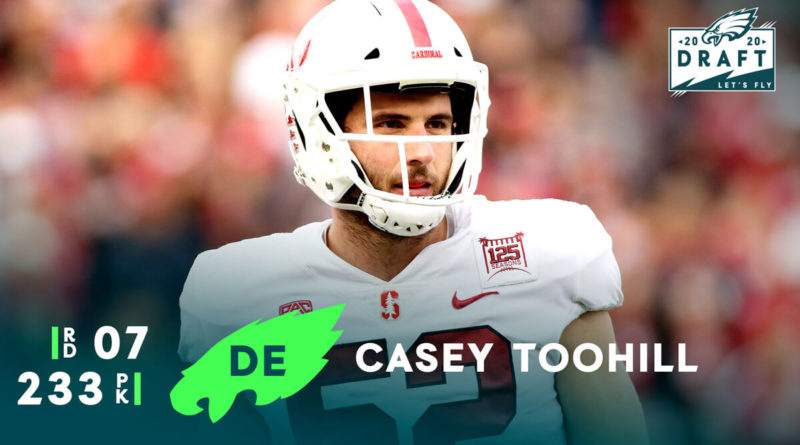 Former Cathedral Catholic High School standout linebacker Casey Toohill was drafted by the Philadelphia Eagles Saturday in the seventh round of the 2020 NFL Draft.

Toohill, who played four seasons at Stanford, was selected with the 233rd overall pick. He was considered one of the top pass rushers coming into the draft with several mock drafts projecting him in the fourth thru sixth rounds.

Toohill was a three-star recruit out of Cathedral Catholic, choosing the Cardinal over Washington, Boston College, and several Ivy League schools.

Toohill had a breakout senior season for the Dons in 2014. He had 63 tackles and 12 sacks while leading Cathedral Catholic to the CIF open division semifinals. Toohill was named a first-team All-CIF selection.

The skinny: A 6’4″, 250 pound outside linebacker, Toohill was an All-Pac 12 selection as a fifth-year senior in 2019 after collecting 57 tackles and eight sacks. He finished his career at Stanford with 124 tackles and 14 sacks.

What they’re saying: NFL.com’s Lance Zierlein says “Toohill’s a tricky projection based upon his issues stopping the run, but he has great flashes as a pass rusher. His body type may not be fully finished and additional play strength would be crucial considering his inability to anchor and shed against run blocks. His rush is much less effective against stronger tackles, but he’s a decent athlete and hints at rush skill that has room for development.”