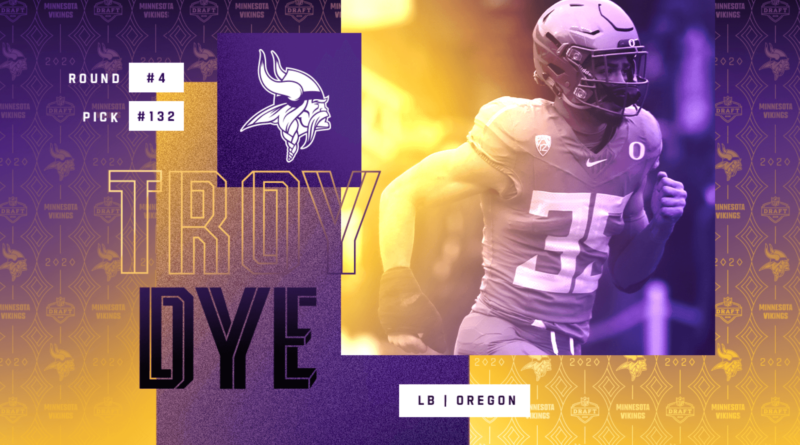 Former Norco star Troy Dye was drafted in the fourth round of the NFL Draft by the Minnesota Vikings. He was selected 132 overall.

Troy was projected to go anywhere from from early in the third round to all the way into the fifth. Sports Illustrated’s Erick Trickel has him ranked as the 68th best overall prospect in the draft while NFL.com’s Chad Reuter had him falling to 176. Most mock drafts had him somewhere in between, mainly late in the third round or early-to-mid fourth.

Dye spent his first two years of high school at Corona Centennial before transferring to Norco in 2014. In both upperclassman years as a Cougar, Dye recorded at least 105 tackles, playing a number of defensive roles ranging from inside linebacker to safety. As a 3-star prospect, he received five offers.

The skinny: Dye was an impact player from day one at Oregon, and is the only player in Ducks history to lead the team in tackles for four consecutive seasons. He finished third in program history in career tackles (397), including 115 as a junior, and tied for fourth in tackles for loss (44.0). Early in his senior season, Dye broke his thumb and still finished the game, and played the final eight games of the season with a cast on his right hand.

In addition to some of the best tackling numbers in school history, he’s also one of only nine FBS players since 2000 with 15 sacks and five interceptions in a career.

What they’re saying: “It’s easy to fall in love with the tackle production, football IQ and sideline-to-sideline range but his slight frame and difficulty keeping weight on could become a major stumbling block for him in the way teams view his pro potential. His skill set and recognition are best suited along the inside, but due to his size, he might need to ply his trade as an outside ‘backer in a 4-3 defense. He has three-down talent with the aptitude to cover or blitz and is in line to go from plus-backup to eventual starter if he can keep good weight on his frame.” -NFL.com’s Lance Zierlein.