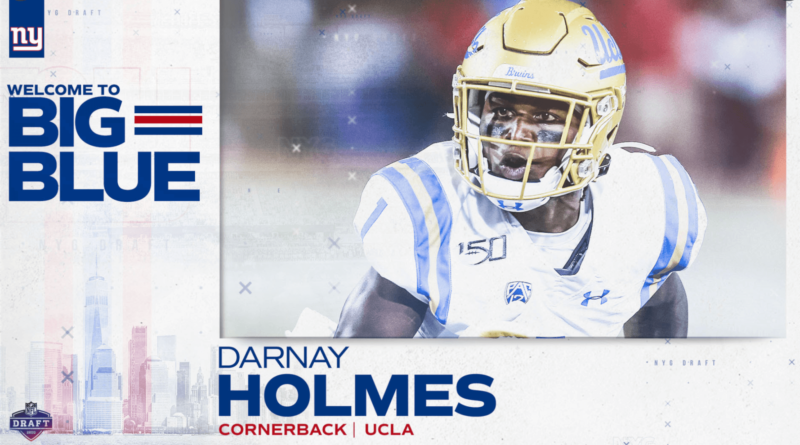 Former Calabasas star Darnay Holmes was drafted in the fourth round by the New York Giants. He’s the first ever NFL Draftee from Calabasas High School.

Mock drafts including those by NFL.com and CBS Sports had Holmes going anywhere from the third round to the end of the fourth. Holmes played three years of college football at UCLA and, despite his football prowess and NFL chances, graduated in under three full years of school.

Holmes was mostly rated as a 5-star prospect coming out of high school and was a USA Today Second Team All-American his senior year. In addition to shining at cornerback, Holmes was a full-time WR1 at Calabasas and amassed over 1,200 receiving yards as a senior. That year, he led Calabasas to a dominant Southern Section Division 5 title run, and the Coyotes went undefeated on the year until falling just short against eventual state champion Madison in the state semifinals.

The skinny: At 5-10 and a little under 200 pounds, Holmes is undersized for an NFL cornerback but has thrived at every level of football due to excellent instincts. He started 11 of 13 games as a true freshman in 2017 and started every game he was available for in 2018 and 2019. Holmes was an All-Pac 12 Honorable Mention in 2018 and 2019.

“For the NFL, Holmes looks like a backup slot corner. He might get cross-trained at safety because of his instincts, but his lack of size, speed, and tackling ability could make it tough for him to play safety as a pro. Some team sources have him graded as a mid-round pick in the 2020 NFL Draft.” -WalterFootball’s Charlie Campbell.