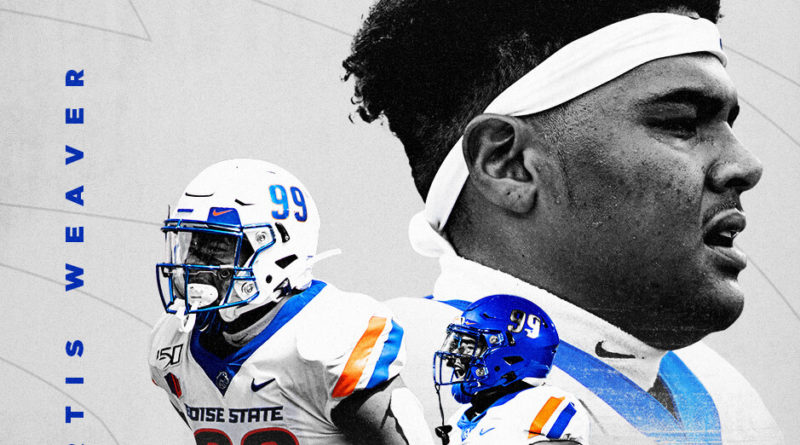 Two out of three days of the 2020 NFL Draft have come and gone, but four of the seven rounds of the drafts are still yet to take place on Saturday.

So far, only one Southern Section alumnus has been drafted in the first three rounds. Former USC and Oaks Christian (Westlake Village) All-American WR Michael Pittman Jr. came off the board on Thursday evening as the second pick of round two (34th overall).

In addition to those five players, there is one Southern Section grad who is projected to go in round four or five. All six of those players are essentially locks to be drafted on Saturday, and there’s a chance that all six get taken in the fourth round alone.

Boise State DE Curtis Weaver was projected to get taken in the mid-to-late third round. The 6-3, 265 former St. Anthony (Long Beach) star is the Mountain West’s all-time sacks leader with 34 in only three seasons.

Oregon ILB Troy Dye was also projected by many to go late in the third round. The 6-3, 231 former Norco Cougar is the only player in Oregon history to lead the Ducks in tackles for four consecutive seasons.

The first of a few Southern Section grads who have been projected to go in the fourth round is Washington OL Nick Harris. Harris was under-recruited coming out of JSerra (San Juan Capistrano), where he played guard under former NFL OL Pat Harlow. UW was the only FBS team to offer Harris a scholarship, and after two solid seasons at guard they converted him into a center where he flourished.

After posting 589 receiving yards last season, Stanford TE Colby Parkinson is projected to go in the fourth round. In high school, Parkinson was a teammate of Pittman’s at Oaks Christian.

UCLA CB Darnay Holmes is also a projected fourth-round pick. Holmes received some All-American honors after a dominant senior year playing both WR and DB for Calabasas, and graduated from UCLA in only three years before entering the draft.

Lastly, UCLA RB Joshua Kelley has been projected to go in either the fourth or fifth round after rushing for over 1,000 yards in back-to-back seasons. Before UCLA, he played at UC Davis, and before that he played high school ball at Eastside (Fontana).

Those six players are likely to get drafted in the first half of Saturday’s four rounds, and former Loyola (Los Angeles) and Washington CB Myles Bryant has a strong chance of getting drafted in the seventh round as well. That makes seven total former CIFSS players likely to be drafted on Saturday.

Finally, eight more former Southern Section stars are projected to go undrafted but do have chances of getting their names called on Saturday. They are:

With the potential of 10 or more Southern Section alumni getting drafted, Saturday is likely to bring up a lot of familiar names for longtime SoCal high school football aficionados. Scorebook Live will keep you updated on every California product who gets drafted on Saturday.