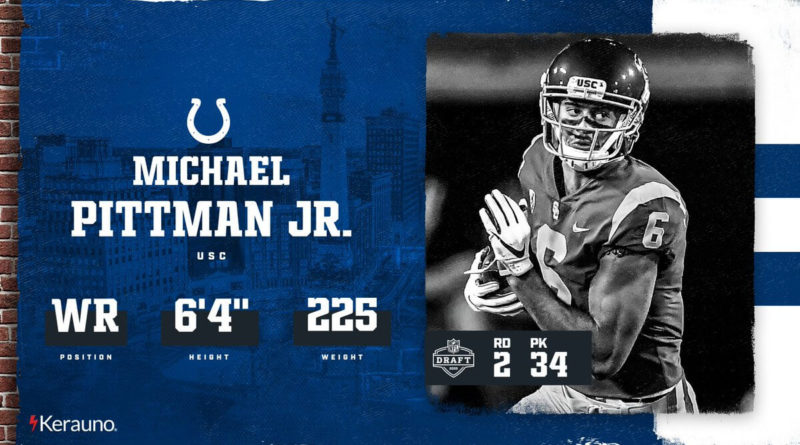 Former Oaks Christian (Westlake Village) star Michael Pittman Jr. was drafted to the Indianapolis Colts with the second pick of the second round (34th overall) of the 2020 NFL Draft.

Pittman is the son of former NFL running back Michael Pittman Sr. and the brother of Mycah Pittman, a sophomore wide receiver at Oregon.

Some mock drafts had Pittman going in the first round, with most projecting him to go in the mid-to-late second round.

As a high school prospect, Pittman was given ratings ranging from high-4-star status to 5-star status, with 247Sports ranking him as the second best wide receiver in the Class of 2016.

In his senior season (2015), Pittman was a First Team All-American after mind-blowing stat line of 1,990 receiving yards, 24 receiving touchdowns, and 625 returning yards in 12 games. He caught for 354 yards and five touchdowns in his final high school game, a playoff loss against Bishop Amat in the Lions’ only loss of the season.

The skinny: At 6-4, 223, Pittman has prototypical size for a downfield receiver. He caught 171 passes in his career at USC, 12th in school history. Pittman totaled 2,519 yards and 19 touchdowns with an average of 14.7 yards per catch in his four-year college career, and had nine 100-yard receiving games.

Pittman’s senior year of college was his best. In 13 games, he had 101 receptions for 1,275 yards. His mark of 101 catches was the highest in the Pac-12 and fifth-highest in the country.

Sports Illustrated’s Jaime Eisner says: “If there’s one word that can be used to describe Pittman, it’s ‘solid.’ He lacks the speed and separation skills to be a true WR1 in the NFL but does so many other things well. He’s a strong special teams player, eager run-blocker, has a good grasp on the full route tree and has strong hands to make contested catches.”

SB Nation’s Robert Ban gives a similar breakdown of Pittman’s game, citing his well-roundedness as his best attribute and calling him a borderline-first round talent.

He also once crashed his brother’s interview with our very own Connor Morissette after Mycah and Calabasas defeated Sierra Canyon in 2018.