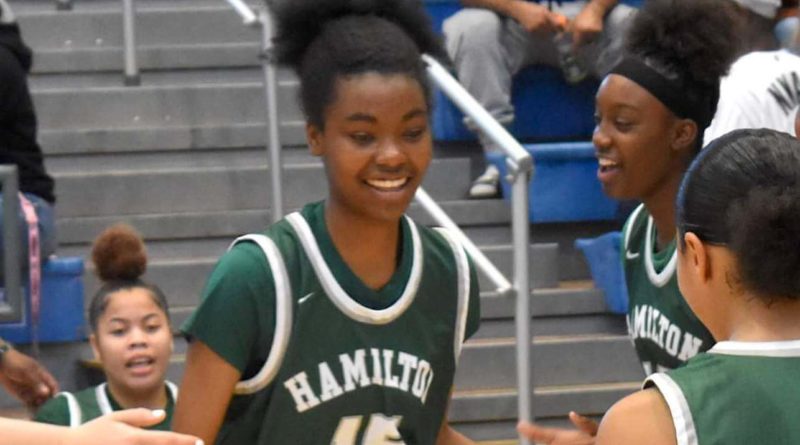 With the three-point shot more prevalent than ever in basketball, it’s no surprise that perimeter shooting was what separated the great teams from the average tams last season in L.A. City Section high school girls basketball.

To qualify for our top 20 shooters list, players had to hit at least one 3-pointer per game with a minimum of 20 makes on the year. They also had to shoot at least 30% from deep. There were a few exceptions for players who narrowly missed the 30% cutoff but made a high volume of threes or were also strong mid-range shooters.

Email lance@wpsblivest.wpengine.com to submit a photo or nominate a player we missed who meets the statistical criteria.

Ali only played in 18 games, but she hit 20 threes at an unbelievable 49% clip in those games.

Of all players in the City Section who shot 37% from three or higher, Arnold had the most makes at 62 on the season. She’s also a good mid-range shooter.

Blevins hit 52 threes on the season at an efficient clip for one of the best shooting teams in the section. She has a very quick release and is also a big threat to pull up from mid-range.

In 20 games, Buenaventura hit one three a game for the Division II finalist at an excellent 38% clip.

The leading scorer in the City Section with room to spare with 28 PPG, Buffington hit 64 threes in only 20 games and was also prolific from mid-range.

Cruz was not only a big part of one of the best-spaced floors in the section, but had a knack for hitting clutch threes in close games or when Hamilton’s offense was sluggish. With a high release and an aptitude for hitting contested shots, she hit a number of deep threes with defenses trying to close out.

One of the top 3-and-D wings in the City Section, Delgado was well into the top 10 in made threes with 57 of them.

Averaging nearly four made threes per game, Gonzalez led the L.A. City Section with 100 triples on the year. Another eye-popping stat: 366 of her 433 field goal attempts on the season were from three, despite defenses trying hard to run her off the line.

Lagway was one of multiple excellent shooters on the Open Division champion and SoCal Division II champion. At upwards of 5-9 with a high release, she got her shots off with ease over other guards from three and mid-range, and her ability to match up with frontcourt players kept Palisades’ floor spaced when they decided to go small.

Privado hit 42 threes on over 30% shooting from deep, and was also consistent from mid-range.

Quintana was in the top five in the section in made threes with 66 on 32% from deep. Her range extends well past the arc.

One of only three players on the list to make fewer than 20 threes on the year, Rocha played limited minutes in only 16 games but still hit 16 threes at 35% from deep.

Saidoff was second in the section with 84 made threes on 34% 3FG en-route to over 17 PPG. That was despite constant attention from defenses trying to keep her from shooting threes, so she often had a high degree of difficulty on many of her looks, including contested and from far past the arc. She was also one of the top mid-range shooters in the CIFLACS.

Salazar was third in the City Section with 68 made threes for the Patriots at 30%, and her floor-spacing was crucial for a team that did most of their work driving into the paint.

Watkins is an outlier on this list for only hitting 20 threes in 28 games, but the best slasher in the section was so effective driving the ball that she only needed to take 50 threes on the season. In addition to shooting 40% from deep, Watkins had a nice mid-range pull-up jumper that helped create space en-route to averaging over 18 PPG.

One of the most efficient spot-up shooters in all of California, Walk knocked down 38 threes on an unreal 52% from deep.

The second-leading scorer on Division I champion Westchester, Waugh was consistent from three and also one of the best mid-range shooters in the section.

Williams is one of only three players to make our top 20 without 20 makes on the year, but she was only available for 12 games as a senior. In those 12 games, she averaged nearly 10 points a game and hit 14 threes at an excellent 39% rate.

Despite primarily playing the role of a facilitator, Yoshino hit 33 threes on 32% from deep.

Perhaps the top true stretch-four in the section, Youshafar hit 31 threes at 31% 3FG.