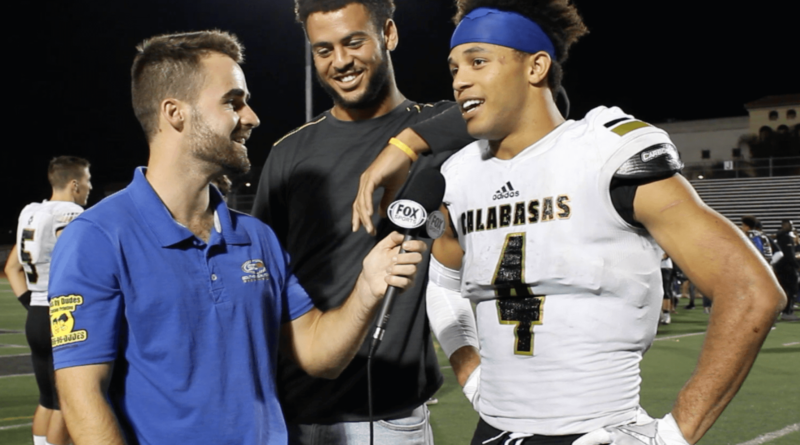 Using a seven-round 2020 NFL Mock Draft from CBS Sports, Scorebook Live California’s Connor Morrissette breaks down which players with Southern California high school football ties have a shot at hearing their names called in the 2020 NFL Draft. The draft starts Thursday at 5 p.m. with the first round.

Pittman starred at Oaks Christian before playing at USC. In his career with the Trojans, he caught 171 passes for 2,519 yards (14.7 avg) and 19 touchdowns. His 171 career catches rank 12th on USC’s career receptions list. He had nine 100-yard receiving games in his career.

Some mocks have Pittman as a first rounder, but the majority have him going in the second round. The CBS Sports mock draft predicts that the New York Jets will take Pittman with the 48th overall selection.

In the video below, Michael Pittman crashes his brother Mycah’s interview following a Calabasas High win over Sierra Canyon in 2018.

Weaver ended his college career as the Mountain West’s all-time sack leader, and second in Boise State history, with 34.0. He played in high school at Long Beach St. Anthony.

CBS Sports predicts that Weaver will be picked in the third round by the Dallas Cowboys at 82 overall.

Dye is the only player in Oregon history to lead the team in tackles for four consecutive seasons. He finished third in program history in career tackles (397) and tied for fourth in tackles for loss (44.0). He played in high school at Norco.

CBS Sports predicts that Dye will be picked in the third round by the Philadelphia Eagles at 103 overall.

Harris started 25 games in a row for Washington at center to finish his college career. He was named to the All Pac-12 first team the last two seasons. Harris played under former USC tackle Pat Harlow at JSerra.

Harris is a predicted fourth round pick by CBS Sports. They have him going to the Denver Broncos at pick 118.

Parkinson had 48 receptions for 589 yards and one touchdown this past season at Stanford. He was a second team All-Pac 12 selection. Parkinson played high school football at Oaks Christian.

He’s a projected fourth round pick by CBS Sports. They predict the New York Jets will select Parkinson with pick 120.

Holmes led UCLA with two interceptions last season. He was a consensus five star recruit coming out of high school from Calabasas.

CBS Sports predicts that Holmes will be picked in the fourth round by the Buffalo Bills with pick 128.

Kelley played at Eastside before attending UC Davis and then UCLA. He became the eighth running back in UCLA history to rush for over 1,000 yards in back to back seasons this past year. Kelley rushed for 12 touchdowns as a senior.

He’s a projected fifth round pick by CBS Sports. They have him going to the New York Jets at 158.

Bryant was a second team All-Pac 12 selection this past season. He had four career interceptions for the Huskies.

CBS Sports predicts that Bryant will be picked in the seventh round by the Minnesota Vikings with pick 253.