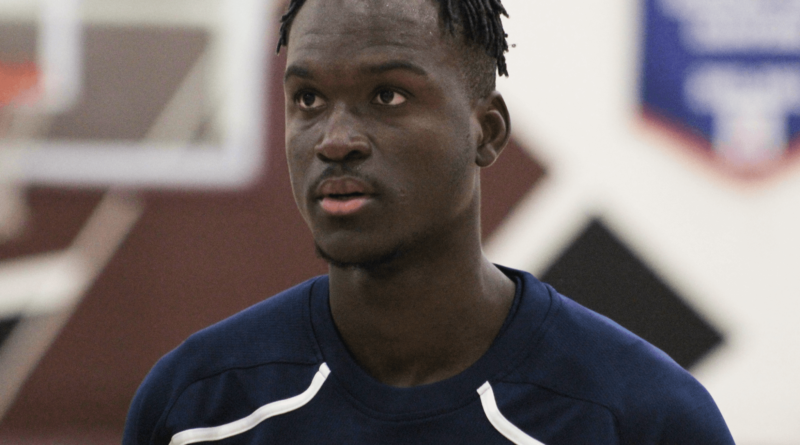 Up next in our series of California high school boys basketball scouting reports is San Gabriel Academy center Boubacar Coulibaly, who committed to USC in March.

Coulibaly is a high-3-star prospect who reeled in six Division I offers, but I still consider him the most underrated prospect of any class of 2020 big man in the Los Angeles area. It’s surprising that he didn’t even have five offers until close to the end of his high school career.

To be fair, he’s a late bloomer because he didn’t start playing basketball until he was 14. He came to the U.S. from Mali before his sophomore year but missed much of the season due to concussion issues. But after averaging upwards of 20 points and 10 rebounds a game his senior year, with SGA playing a tough schedule, he should’ve been swimming in offers.

You can get a good sense of his game from the first two and a half minutes of this video from February against a very good Santa Clarita Christian team (Coulibaly is No. 23 in white.)

Coulibaly is listed at 6-foot-10 and 210 pounds with a 7-2 wingspan that looks even longer in person. He barely has to leave the ground to dunk, and has a massive standing reach. He has the length to play center at any level of basketball, and is also quite agile and coordinated for a teenager filling into a 6-10 frame.

While Coulibaly doesn’t have the width of frame to support a massive build without sacrificing quickness, at least he is very strong for 210 pounds. Obviously he’ll need to put on a good deal more muscle to hang around at higher levels, but he’s still filling out his natural frame and was listed at just 195 not long ago. Crucially, he excels at and embraces being physical down low against much bulkier players, and has a great knack for positioning, so his slender frame isn’t that worrisome.

There are not many physical, athletic 6-10 guys who can dominate on both ends in the post while smoothly knocking down contested 18-footers. There are even fewer who have only been playing basketball for less than five years and are still improving at the rate Coulibaly has.

He has a knack for sealing his man under the basket and finishing smoothly with a dunk over them or a nice short hook. With his good feel for and dedication to positioning, he does a lot of his work on the block before he gets the ball, and doesn’t let his narrowness stop him from playing bully ball. If he can bulk up to around 230 pounds, I don’t see any reason he can’t be a featured low-post threat in medium volume after a year or two of adjusting to D-I ball.

However, what separates him from many other nationally ranked centers is some serious potential in his face-up game. He can isolate way up in the high post and hit an aesthetically sound fadeaway jumper with no wasted movement. Seeing what he can do from upwards of 18 feet with good form and fluidity to boot, he has legitimate stretch big potential.

What makes him enigmatic? Centers who could give you a few buckets a game in the low post and drain face-up 18-footers were all the hype in 2008. But today, most centers are either rim-running, usually pick-and-roll-oriented lob threats, or they are consistent three-point threats.

If his skill set never evolves significantly from what we’ve consistently seen from him at SGA, he could still be a good D-I player, but I believe he has the upside to be more than just a good college player.

JUMP SHOT IS THE FIRST KEY TO HIS UPSIDE

The fact that Coulibaly is a major mid-range threat is nice, but with his form and fluidity, there’s no reason he can’t be a serious three-point shooter down the road. If he could shoot upwards of 35% on a few wide open spot-up threes a game, his potential value as a future D-I star would skyrocket. That’s a transformation big men do make these days, and his 18-foot jumper is already excellent.

According to the Orange County Register, SGA head coach Kevin McCloskey cited USC’s success with face-up/stretch bigs – including transitioning some centers into power forwards – as Coulibaly’s deciding factor in committing to the Trojans. If Coulibaly successfully transitioned into a full-time stretch four at USC, then all bets are off – his upside would be in a whole new ballpark from what anyone has anticipated.

CAN HE ANCHOR THE PAINT AT HIGHER LEVELS?

In addition to developing his three-ball, the other question time will tell is how Coulibaly will handle the rim-oriented duties of a modern center against nightly D-I competition. He was dominant in all interior aspects in high school, so we just need time to see if he can rebound, block shots, and finish inside at the same level against other giants.

Offensively, maybe he can be that rim presence at the center spot at the highest levels. Maybe he’s one prolific pick-and-roll point guard and a spaced floor away from proving he’s already capable of filling that role against great competition. If he is, then he will blow his 3-star rating and total of “only” six offers out of the water immediately. And he has shown some handles and finishes in the open floor at SGA, which is encouraging.

The other question is, can he eventually average 10 rebounds and multiple blocks per game in college? Because he hasn’t matched up against many other star interior centers, it’s just too early to tell. With his physical tools and feel for the game, he might get there.

Once there’s an answer about how Coulibaly rebounds and protects the rim against other elite bigs at USC – which could take a few years – that’s when more can be determined about his pro upside.

To be an NBA prospect, you have to anchor the paint at that level and thrive as either a shooter or rim finisher. It’s far too early to talk about him as an NBA prospect, although I won’t rule out his upside if he really proves himself as a paint anchor or stretch big.

That said, he does already look like an excellent overseas prospect if he stays on track. There is plenty of room for mid-range snipers at the five spot there, and the three-point arc is shorter than the NBA’s. His physical tools would make him a serious paint anchoring/low post prospect in premier European leagues with lucrative paychecks.

A lot of question marks remain about Coulibaly before more can be determined, but there’s ample time to watch him suit up in the cardinal and gold before checking back on his pro potential.