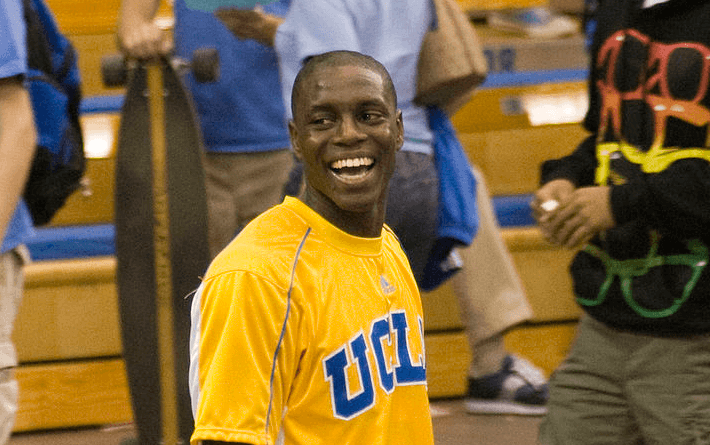 The first round wraps up on Friday with matchups in the NBA region (every player in this region went on to play in the league). In the third matchup, Etiwanda’s Darren Collison, a six seed, takes on Compton’s DeMar DeRozan, a three seed.

Collison was the All-CIF Southern Section Division I-AA Player of the Year and a Los Angeles Times All-Star in 2005. He led Etiwanda (31-2) in points (20.7), three-pointers, steals (2.1), assists (4.0) and added 4.0 rebounds per game that season. In the CIF Southern Section I-AA championship game, he scored 14 points in a 60-45 win over Hart. In the CIF-SS Regional quarterfinals, Collison tallied 16 points, six rebounds and three assists in an 82-55 victory over Clovis. He won MVP awards in three regular-season tournaments (Oceanview Tournament of Champions/LA City Classic/Desert Heat Invitational) that year.

As a junior, Collison led Etiwanda to a 31-3 overall record (No. 23 in the nation) and to the Southern California regional final where they lost to Fairfax in overtime. Collison was named the Division 1-AA All-CIF Southern Section co-Player of the Year as well as an All-Area selection in 2004, averaging a team-high 15.6 points and 5.4 assists per game for head coach Dave Kleckner.

He went on to play at UCLA where he helped lead the Bruins to three straight Final Fours from 2006 to 2008. Collison was drafted 21st overall in the 2009 NBA Draft by the New Orleans Hornets. He played ten seasons in the NBA for five teams.

As a senior, DeRozan averaged 29.2 points, 7.9 rebounds, 3.9 assists and 3.0 steals per game leading Compton to a 24-6 record and its second consecutive Moore League championship. Compton reached the Southern Section DI-AA quarterfinals that year where they lost 62-55 to No. 5 Santa Margarita, snapping a 14-game winning streak. DeRozan scored 30 or more points 12 times, with a high game of 47 in a 100-88 win vs. Gahr on Dec. 27. He led Compton back from an 11-point deficit against JSerra with only 1:22 left by scoring 16 straight points in a 74-73 win on Dec. 15. He finished with 45 points in the win.

DeRozan played collegiately at USC before being drafted ninth overall in the 2009 NBA Draft by the Toronto Raptors. He now plays for the San Antonio Spurs. DeRozan is a four time All-Star.